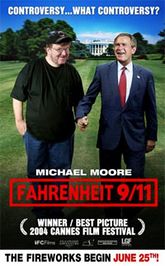 Fahrenheit 9/11 is a documentary film by Michael Moore, rushed out in 2004 in an attempt to affect the coming election (going so far as to encourage people to copy it and spread it around). The title is a play on the Fahrenheit 451, a novel by Ray Bradbury, who was not pleased with the homage, and repeatedly asked Moore to change the title[1] (it being a mere coincidence that a new film version of Fahrenheit 451 was in development at the time).

It's mostly a bunch of liberal "hate America first" lies, smearing the good Bush family name, and as such, it received a 20 minute standing ovation at the Cannes Film Festival (but that's Hollywood values for you). The film is mostly about the sexual affairs of George W. Bush, beginning with the accusation that Fox News and Bush were in bed to hand him the 2000 U.S. Presidential Election. It then discusses briefly Bush's affair with the Air National Guard and his rather at-home service record. Bush then bed hops to fear with the passing of the USA PATRIOT Act and later the Iraq War.

In all seriousness, despite the accolades, it's arguably one of the less entertaining or thoughtful jaunts by Michael Moore. Noted columnist Christopher Hitchens said that "to describe it as an exercise in facile crowd-pleasing would be too obvious,"[2] in reference to the fact that the film was just an exercise in Bush-bashing (which had been a national sport for the American Left since the Iraq invasion of 2003). Researcher Dave Kopel went through the film, identifying numerous errors or distortions, though he, like Moore, opposed Bush.[3]

The film is not all bad though: Saudi Arabia and Kuwait banned the film for being critical of the Iraq war and being an insult to Saudi Arabia's royal family."[4][5]