From RationalWiki
< User:Old guard
Jump to navigation Jump to search

TLDR: This is what used to happen when Zack didn't take his meds. While poking fun at what happened is fine, it's not fine to actually judge them based on their bipolar condition.

Maratreanism was a wacky religion invented by the ex-COBOL programmer,[1] and self-styled "proto-prophet" Zachary Martin, alias "Zarnacy," who claimed that he "had received a certain election of the divine."[2] Martin appeared, at that time, to be the only confirmed practitioner of this religion.

In January, 2016, Zack Martin personally came to this very Wiki to explain to us that he had found the gospel of Equestria, and to actually explain to us what was going on (see header of this page).[3] Thus, with that, the religion of Maratreanism was relegated to the funeral pyre.

Maratreanism is a pluralistic religion, in the vein of some schools of Buddhism. The religion's eponymous goddess, "Maratrea," to whom Martin has authored various prayers,[4] is the analogue of the Hindu Brahma or divine unity.

Maratreanism is also an omnitheistic religion, classing a large number of previously attested deities as avatars or representations of Maratrea, also in the Hindu fashion.[5] Martin's reason for doing this is that "a proper polytheism acknowledges there are many movements of the heart, corresponding to different forms of the divine; therefore, it is fitting that we worship the divine in many forms, that the many movements of the heart be exercised."[6] Among these avatars of Maratrea are: 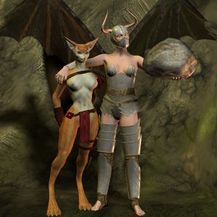 Artist's rendition of Taba and Trinca.

They all live in "the heavens." Notably Delvina lives "in the heavens enthroned as a goddess" whereas Varlus is relegated to "the heavenly seas."

In September 2011 (shortly after the deities were highlighted here) they were temporarily confined to the outer darkness of the Maratrean Apocrypha by the "Maratrean Reformation."[12] It would, of course, be most unfair on the profound revelations that led to and then away from these beliefs (not to mention an application of correlation does not equal causation) to suggest that this "Reformation" is aimed at avoiding further ridicule.

As with many aspiring cult leaders, Martin's teachings are turgid and incomprehensible. Here follows one of the shorter bits of waffle from the Maratrean creed, or statement of faith:

Which, being translated, means that the Maratreans adhere to philosophical idealism and believe in souls that are eternal but volatile. It seems that arguments based on souls (or the lack thereof) are very important in Maratreanism; but this is made difficult by the fact that there is no evidence for the existence of souls, in consequence of which most logical arguments jump ship after the first couple of sentences.

Martin is a young Earth creationist, maintaining that Earth is between 10,000 years and 10 million years old, with the emphasis on the smaller figure.[14] For reference, the scientifically testable age of the Earth is 4.54 billion years — making Martin wrong by some orders of magnitude.

However, unlike the more familiar Christian YECs, Martin holds to the omphalistic view and thus does not claim that scientists are wrong in assigning that age to the Earth based on their research.

Unsurprisingly, with so many "unusual" and unsubstantiated beliefs, Martin rejects the idea that the burden of proof should rest with those making a claim; arguing instead that "If the atheist wishes to disprove the existence of God, the atheist is required to provide evidence for God's non-existence, in the same way as the religious believer can provide evidence for God's existence." Presumably this refers to strong atheism, as weak atheism entails no belief in the non-existence of God.

Martin's ultimate goal appears to be the creation of a separate Maratrean homeland which will eventually "[expand] to incorporate the entirety of the earth under one system of government."[15] This one government will eventually lead to the culmination of the one goal for Maratreans:

The greatest commandment in the law[edit]

The Maratrean moral law, as expounded by "the holy Travancus," seem to be derived at least in part from the short summary of Jewish law made by Jesus in Matthew 22:36-40. It holds that all "truly divine law" is reducible to the following two principles:

Beyond that it gets a bit wishy-washy, in the Rodney ("Can't We Just All Get Along?") King manner.

Abortion is OK under Maratrean ethics because "in most cases where abortion occurs the foetus does not have a soul — for a foetus to gain a soul, its mother must want it."[17]

So that's settled then; presumably those kids who were given up for adoption possess no souls, and hence according to Maratrean theology do not properly exist.

As far as practice is concerned, this seems to mirror the views of Peter Singer, who believes that it is wrong to kill a baby only on account of the grief that would cause its parents and/or other adults.[18]

Animals: the sacred, the weird, and the plants[edit]

Maratreanism possesses a whole slew of sacred animals which cannot be eaten and which possess souls.[19] That is to say nothing of the Terror Taba — a gigantic fanged bat which according to Maratrean mythology lives beneath the earth waiting for the end of time.[20] (Incidentally, intelligent space aliens also have souls.)

Other animals (such as oysters) are, following some stupid idea or another, really plants.[22]

The number of confirmed practitioners of Maratreanism is exactly one, namely the proto-prophet himself. However, reference is made in the proto-prophet's writings to a now-deceased prophet Travancus [23] and a "High Priestess" Claretta,[24] suggesting that the religion may have two practitioners, of which Martin is the subordinate.

Martin is active at a number of wikis, usually under the username Maratrean, which has become synonymous with "tl;dr"[25] posts that leave you knowing less about the subject than you did when you started. He has nothing to say and is going to damn well say it.

Although Martin claims to be a prophet, he also maintains that his prophetic abilities do not extend to such mundane things as foretelling the future, being limited instead to receiving divine messages from the goddess.

As with so many others it is difficult to see if this is a real religion or a parody.