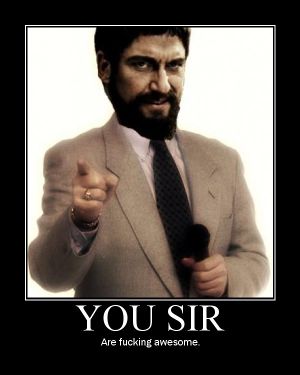 I know plenty about electronica. Anything in particular you wanna know about? Aceof Spades

Mostly just looking to expand my horizons; saw this Swiss band called "Filewile" a few weeks ago, dug how they mixed electronic stuff with live vocals and a bass player; it was really fresh sounding but still sounded like it had some roots in stuff that makes sense to me -- jazz/funk/RandB -- looking for more. That clip you put on Psy's FB page is pretty cool...P-FosterThe Grateful Dead were neither grateful nor dead. Discuss.

You might like St. Germain. Its a little weak for me because I like the heavy bang-bang loud stuff but is probably right up your alley. This album in particular. Aceof Spades

This is one of my favourites......Aceof Spades

All interesting. Many thanks/keep it coming! P-FosterThe Grateful Dead were neither grateful nor dead. Discuss.

If you're after more ambienty / dubby stuff - Banco da gaia, The Orb, Koan (one of my faves), Lemonchill (this is a more uptempo remix), Zero Cult, Shpongle, Shulman, Adham Shaik and upping the tempo a bit Liquid Soul. If you like electro Ladytron, Miss Kitten, FPU--PsyGremlinParlez! 14:41, 19 July 2011 (UTC)

You'll probably like this Recloose track. Formerly from Detroit he now resides, and plays, in my fair city. Aceof Spades

No. I just really believe that a revolution that took the ideas of universality that were at the heart of the French Revolution and applied them to the enslaved -- and in doing so got past the inherent tension in the bourgeois/liberal conception of human rights vs. property rights is really important, and really overlooked. But it was perfect, yeah. P-FosterThe French Revolution was neither French nor a Revolution. Discuss.

(Oh, good- now we can talk about history now that the obligatory RW joke grace period is up :P) While I'l agree that the HR is important and is overlooked, I'd hardly say that it's the "greatest revolution of all time." It was essentially the same action that was taken by he Americans just a little bit before- the deposition of colonial masters. Neither Washington nor L'Ouverture and his lieutenant whose name I can't remember actually marched into London or Paris and just straight up deposed their colonial overlords, they merely removed the governments ability o project force into their lands- and the governments set up to govern the now-independent states were basically 1. a oligarchy dominated by white Southern landowners in America and 2. another monarchy in Haiti. By contrast, the FR was a movement that was, at its core, essentially anti-monarchist- sure, they paid lip service to constitutional monarchy in the beginning, but I don't doubt for one second that Robespierre and co. intended to kill off citizen Capet as soon as the opportunity arose. That's incredibly radical, incredibly risky, and ultimately, incredibly important- the FR was the first moment in modern history (with the possible exception of Cromwell) that there was a serious and legitimate movement away from monarcy towards republicanism and radical egalitarianism, and I don't really think that that's the sort of thing that can be used as a footnote to the first use of enlightenment values to attack "property rights" (BTW, could we maybe put 'property rights' in the article about Dog whistle politics? Because that's a pretty decent historic example...). When you consider the fact that absolute monarchy, in one form or another, was the way that nearly 100% of humans had been governed for the previous 90% of history, the FR really stands out in terms of importance. --The Emperor Kneel before Zod! 03:17, 23 July 2011 (UTC)

"It was essentially the same action that was taken by the Americans just a little bit before- the deposition of colonial masters." No. it was more than that. It was the only time that a nation of enslaved subjects claimed and took the rights of free-born citizens. If you want radical and risky, try changing the fundamental idea of who gets to count as a human being. When you consider the fact that the amount of melanin in your skin determined whether you were a person or property, changing that, my friend, is truly "radical egalitarianism." P-FosterThe French Revolution was neither French nor a Revolution. Discuss.

Also, once you take into account that a great deal of the wealth that allowed for a class of revolutionary bourgeois Frenchment to emerge was created in places like St. Domingue, the centrality of Africans and the African diaspora in the development of the universal-rights-bearing subject is brought into even sharper focus. P-FosterThe French Revolution was neither French nor a Revolution. Discuss.

Funny, but I didn't notice your

(ec)Interesting, I have to say I didn't even realize there was some kind of Medievalist subculture -- I've heard of that kind of thing, but it probably gets more play in the male dom arena, for obvious reasons. Nebuchadnezzar (talk) 04:24, 25 July 2011 (UTC)

Sure--dungeons, in general, but lots of toys have that middle-ages vibe. Right up there with the Nazi aesthetic that Sontag wrote about. P-FosterThe French Revolution was neither French nor a Revolution. Discuss.

Oh, it's not my style at all -- role-play doesn't really make a lot of sense to me no matter what the aesthetic is. Just mentioning that it's a pretty important trope to some....P-FosterThe French Revolution was neither French nor a Revolution. Discuss.

One does not need to role-play to keep things interesting. P-FosterThe French Revolution was neither French nor a Revolution. Discuss.

In your old age[edit]

You are becoming quite a knob. DeltaStarSenior SysopSpeciationspeed! 02:00, 31 July 2011 (UTC)

What exactly are you bitching about, Delta? P-FosterThe Holy Roman Empire was neither Holy, nor Roman, nor an Empire. Discuss.

Just your general tone of late mate. Your comments to (the rather annoying) Bricks recently for example. I understand that my above comment is quite knobby itself, so apologies there. DeltaStarSenior SysopSpeciationspeed! 03:35, 31 July 2011 (UTC)

Well, I do apologize if I've gone too far. I like to think I give as good as I can take. It can be too easy to forget that Brx or Delta or Human or even MC are real people behind the screen handles. Thanks for pointing it out, and I'll try to remind myself to dial it back a notch. P-FosterThe Holy Roman Empire was neither Holy, nor Roman, nor an Empire. Discuss.

No probs mate, and thanks for taking this in the manner in which it was intended. It's often difficult to convey tone and intent in writing, so people can read things as being more vitriolic than the author intended. (For the record, I'm not a real person, I'm a sock of Rob Smith) DeltaStarSenior SysopSpeciationspeed! 03:44, 31 July 2011 (UTC)

Okay, I laughed... But seriously, what have I done to you to deserve this animosity? Maybe I can make it right (inb4 YOU MUST LEAVE THEN IT WILL BE RIGHT or something like that--User:Brxbrx/sig 03:52, 31 July 2011 (UTC)

I'll tell you what kid -- it's getting late and I got a few things to take care of. I will answer that last post with a reasonable, thoughtful and hopefully productive reply in the morning. Promise. P-FosterThe Holy Roman Empire was neither Holy, nor Roman, nor an Empire. Discuss.

As promised. Brx: I don't have anything against you personally; how could I, when I don't even know you. All I have to go one is your wiki-persona, and there are a few problems with how that persona fits in with the general vibe here at RW. Calling attention to yourself, interjecting nonsense in the middle of a serious discussion (too lazy to get the diffs, but I'm thinking of you poking into a heated discussion I was involved in about the Norwegian situation to talk about Black superheroes or something) and having a "meh, whatever" attitude about the kinds of policies that define community attitudes (like blocking, or deleting comments)--all of these things kind of get on my titis, and I treat you accordingly. We are a remarkably tolerant bunch, and we've set the bar pretty low in terms of what our expectations are in terms of standards of behaviour. Not as low as they are at ED, but I suspect that it's actually easier to be a N00b over here than over there. Just try and treat our community with the kind of respect that we ask, and I'll try not to crap all over you when you fuck up, as we all do from time to time. P-FosterThe Holy Roman Empire was neither Holy, nor Roman, nor an Empire. Discuss.

Life the universe and everything[edit]

dolphins and whales falling from teh sky. I"m just saying.--

Course at some point, one has to have something to say, but I don't have it. at least it's not endless rounds of reverts. --

Who rocks? My Indian-studying, wiki-editing, Earthland-fighting, abortion-rights-advocating, French-guy-marrying friend from the Rockies rocks. P-FosterThe Holy Roman Empire was neither Holy, nor Roman, nor an Empire. Discuss.

Where do you get off?[edit]

Personally attacking me for using your own standards? You're the moderator. You're supposed to set the example. I follow and get admonished by you? You're corrupt, Foster. Occasionaluse (talk) 14:12, 6 August 2011 (UTC)

I usually get off at the stop closest to my house, but sometimes when it's nice I like to get off a few stops early and enjoy a little stroll before dinner. P-FosterAuthoritarian Prick.

I dont catch the bus any more. I hated the smell of poverty. Aceof Spades

My other possible reply involved "getting off" and "your mother," but I couldn't get the phrasing quite right. P-FosterAuthoritarian Prick.

Go ahead! Strike while I'm still hung over. It'll be your only chance! The Punk Symphony of Noise Your mental puke relief 15:51, 6 August 2011 (UTC)

You guys have nothing on me. And even if I did write those emails, I would have never used british spellings. Occasionaluse (talk) 20:00, 8 August 2011 (UTC)

Sorry to see you resign your post, but please do come back. You are useful to the community, far more useful than Mei I am. Aboriginal Noise Oh, you want to hit people with garbage cans? 22:32, 8 August 2011 (UTC)

So I see you're still here[edit]