From RationalWiki
Jump to: navigation, search
Try not being so rude. --It's-a me,

"Try not being so rude." I'm only rude to other rude people. Have you read any of GrammarCommie's comments? I have because I've lurked around for a very long time before editing. He (or she) constantly insults other editors who disagree with him. Why is it a-okay for him to be rude but not me? Tyrone8934 (talk) 01:24, 29 December 2018 (UTC)

You walked in being rude. We were responding to another rude user being Dark Master. And you were rude to me. You called us a piece of filth you insulted my reading comprehension. When I tell you to moderate your tone, it's good you don't point fingers at others, who didn't give you respect because you started with no respect for us. --It's-a me,

Technically it's not. That being said, it seems a lot of people read the articles here up until the point that they dislike, and then no further. This is somewhat problematic given that further inquiry generally leads to more context and sourcing. Then of course, there are those who seem to fail to understand burdens of proof, or that their arguments are neither new nor useful, or that their pet idea isn't worth anything. Now tell me, if you had to read through the terminally incompetent drivel most people write, wouldn't you be a touch jaded too? Besides, haven't you heard of the moral high ground? I mean I know that I'm an irredeemable wretch but I do tend to hope others might not be. ☭Comrade GC☭Ministry of Praise 01:35, 29 December 2018 (UTC)

@LeftyGreenMario They gave context for their behavior, wherein as a lurker they have observed me and formed a negative opinion. I think a bit more befit of the doubt is in order. ☭Comrade GC☭Ministry of Praise 01:36, 29 December 2018 (UTC)

@Matty the Damned Magnum opus? You do realize this is my very first created page, right? If you're gonna try to be witty, at least put some effort into it. But I'm glad you have the honesty to label yourself a bogan. Anyway,... The Golden One is a crank and an authoritarian with 87 000 subscribers, possibly more in the future. He's exactly the kind of person Rational Wiki tries to expose. See this page for the purpose of Rational Wiki. Tyrone8934 (talk) 09:33, 30 December 2018 (UTC)

@Matty the Damned "Like I'm gonna waste 'A' material on you, pin-dick." No, I'm sure you're too busy pleasuring yourself to online images of Richard Dawkins. Actually, I'm being generous by assuming that you even have a dick to pleasure yourself with. ;) Tyrone8934 (talk) 11:04, 30 December 2018 (UTC)

@Dysklyver: That's the most idiotic comment I've ever read. The Men's Rights Movement page contains claims and rebuttals. It was already a debate page in all but name. Tyrone8934 (talk) 01:11, 14 February 2019 (UTC)

@Dysklyver: PS: Soon, I'll be blocked from editing this talk page too, so don't expect replies.

No, you shouldn't rebut the page authors themselves on mainspace pages. This is not mainspace material. — Dysk (contribs) 11:41, 14 February 2019 (UTC)

@Zero: You're obviously too much of an intellectually bankrupt coward to make your own rebuttals on behalf of Rational Wiki. You also look like a hippo with long hair and glasses. Tyrone8934 (talk) 01:11, 14 February 2019 (UTC)

Actually you're wrong there, our kid. Sysops can change some user rights. Techs (of which Zero is one) can change other user rights including adding or removing sysoprevoke. --MtDBogan 05:06, 14 February 2019 (UTC)

This is also true and I have also pointed out in the email that some users are awarded tech status. Those abhorrent, disgusting, vile personal attacks on Zero's physical appearance will not fly in this community, by the way. You will rethink that strategy or else further action will be taken. --It's-a me,

@LeftyGreenMario: You will go fuck yourself, you piece of dog shit. Unlike you, I have a life, so being permabanned from 1 website doesn't affect me all that much. Unlike you, I have a spine, so I'm unwilling to bend over and offer my ass whenever I'm mistreated. Tyrone8934 (talk) 11:19, 16 February 2019 (UTC)

You're not handling your situation well, it seems. The unwarranted and immature personal attacks are not helping and they are what got you trouble in the first place. I am more convinced you're more trouble that you are worth and I am now contemplating restricting your talk page edits as well. I refuse to believe you are mistreated when you straight up called someone an ugly hippo and insulted their weight because they reverted your edits. --It's-a me,

@LeftyGreenMario: "I refuse to believe you are mistreated when you straight up called someone an ugly hippo and insulted their weight because they reverted your edits." That's because your head is 20 000 leagues up a horse's ass. 2 users reverted my edits before Zero, but I didn't insult them. I insulted Zero because it blocked and demoted me. Context is everything, dickhead! Tyrone8934 (talk) 19:03, 7 March 2019 (UTC)

This sort of crap is making me inching more and more toward long-term blocks. --It's-a me,

@RoninMacbeth: "explaining why you needed to revert obvious vandalism is not going to be productive." I ain't saying the explanation needs to be before the reversion. I imagine the process to go something like this. 1, User A makes an edit. 2, User B reverts the edit and then explains why in the talk page. 3, User A and User B debate until they agree. If they don't agree, an edit war ensues. 4, after an edit war ensues, a mod locks the page. 5, a poll is put in the respective article's talk page. Each user gets 1 vote, regardless of rank. 6, the party with more votes keeps his or her edits. In the case of a draw, the article stays as it was before the first edit. Tyrone8934 (talk) 00:45, 16 February 2019 (UTC)

@RoninMacbeth: The above process is already used informally on most talk pages, but it's highly inefficient and primitive. People don't always explain why they revert edits; the lack of a formal vote creates ambiguity about which opinion is more popular; you're more likely to see high-ranking members unfairly block and demote low-ranking members over small disagreements; etc. Tyrone8934 (talk) 00:45, 16 February 2019 (UTC)

My point is that the revert action in of itself communicates that something was wrong with the edit. It's up to the person that was reverted to query that action, not the one who reverted it. Not saying revert is always a smart action, but it's expected protocol and it works. --It's-a me,

@LeftyGreenMario: It only seems to work because you never stopped to think of the flaws. Your method gives too much power to the person reverting the edits. What if the reverter never gives reasons for reverting? What if the editor is a sincere member, and the reverter is a vandal? What if more people agree with the editor than the reverter? A formal voting process would make that more obvious. Tyrone8934 (talk) 11:19, 16 February 2019 (UTC)

Not everything is going to get your way. It goes without saying that common sense is factored here. This operates on the assumption that both parties have good faith and expected to behave in good faith. If the reverter never gives reason for reverting even after you query, you should ping and ask for for a response and most of the time, they should respond and it'll be more productive if you are polite. If the reverter is acting obstinate despite consensus from others, that's when moderators come in. Your proposal just makes the process cumbersome and difficult to enforce. --It's-a me,

@LeftyGreenMario: "If the reverter never gives reason for reverting even after you query, you should ping and ask for for a response and most of the time, they should respond" "Should" is a weasel word in this context. Lots of things should happen but don't. "If the reverter is acting obstinate despite consensus from others, that's when moderators come in." The most efficient way to show majority consensus is by voting. No voting means you have to look through the entire debate to see who agrees with whom. This is extremely cumbersome with long debates in which many people make multiple rebuttals. "Your proposal just makes the process cumbersome and difficult to enforce." No. Mods only get involved twice during this imaginary process: once to block both parties in an edit war and once to create the poll for voting. BTW, you still haven't addressed the problem of your current policy giving a disproportionate amount of power to the reverter. Tyrone8934 (talk) 14:46, 18 February 2019 (UTC)

The current policy here, as on Wikipedia and elsewhere, is that the person making the edit should start the discussion. Reverting something back to how it was before is basically fine if there is no discussion about it. See Wikipedia:Wikipedia:BOLD, revert, discuss cycle. — Dysk (contribs) 14:55, 18 February 2019 (UTC)

@Dysklyver: What if User A starts a discussion; no one responds; User A edits; User B reverts the edit and never explains why? I don't think User B's conduct should be allowed. What if Users A and B do debate; multiple people chime in; the debate becomes messy; and consensus is unclear? Kinda hard to resolve the issue without voting. Tyrone8934 (talk) 22:53, 20 February 2019 (UTC)

@Dysklyver: You're dodging the core issue here. Even if User A starts a discussion before making an edit, User B can still revert it without explaining himself. This is unfair to User A and could lead to an edit war. Tyrone8934 (talk) 06:19, 23 February 2019 (UTC)

@Dysklyver: "if User A has started a discussion, then User B is obligated to respond when reverting." Is that already a rule here? If so, then our debate is pointless because I've already gotten half of what I want. The other half is my proposed solution for peacefully ending edit wars. Tyrone8934 (talk) 00:35, 24 February 2019 (UTC)

I second that opinion. This user has shown themselves to be an ass. Such behavior makes them a questionable choice for sysop. Commie Lib (talk) 19:43, 7 March 2019 (UTC) 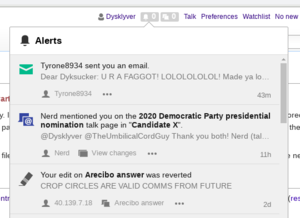 "You said, "This user has shown themselves to be an ass."

I think that's a typo. What you meant to say was, "My wife showed her ass to Tyrone8934 to seduce him.""

Well now he's gonna say you can't get laid or something. --It's-a me,