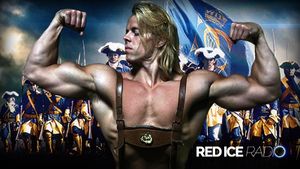 The Golden One: (alleged) modern Viking and slayer of beta leftists!

Marcus Follin, better known as The Golden One is a Swedish white nationalist YouTuber,[1][2] bodybuilder, and online fitness coach,[3] as well as the creator of one of the dullest Skyrim

Despite his bizarrely reactionary views, or maybe because of them, The Golden One's YouTube channel boasts over 100,000 subscribers as of June 2020.[6] Some of his subscribers are supposedly in positions of power.[2] Keep on reading, and let that sink in.

The Golden One has shown open support for Rodrigo Duterte, former President of the Philippines,[7] whom he describes as a hero, role model, and textbook definition of a good leader.[2] Specifically, he supports Duterte's decision to encourage the murder of suspected drug dealers.[8] Has it ever occurred to him that some people targeted by Duterte's lynch mobs might be innocent? Yes, it has, but he views it as a necessary sacrifice[9] because everyone knows that stopping consumption of particular combinations of chemicals is more important than due process or innocent people's lives.

The Golden One encourages young men to forcibly prevent their female loved ones from leaving home at night.[10] His rationale is that he's keeping them safe from Middle Eastern immigrants who want to rape them. Apparently, for all his knowledge about "getting joocy" (read: becoming muscular), he has a relatively poor understanding of human rights, namely the 9th right of protection from "arbitrary arrest, imprisonment or exile". One must wonder how "alpha" he would feel if his girlfriend called the police on him.

In 2015, a 12-year-old boy was recorded on video twerking at a gay pride parade.[11] The Golden One criticizes the gay community for not speaking out about this.[12] He then implies that "gay rights", as he calls them, should not be legal unless the gay community can control its members.[13] This is a fallacious argument; a community can be defined as (but is not necessarily) a group of people in a geographical area who have one or more traits in common.[14] Unless a community is a formal organization with rules, it has no responsibility to police its members.

Like any good right-wing nutjob, the Golden One also loves to indulge in conspiracy theories. For example, he claims that the racist indie game "Angry Goy II", which features him as a playable character, is a secret ploy by leftists to make him look bad,[18] or that right-wingers who post hateful comments under his opponents' videos aren't really affiliated with him but instead paid by the Jews.[19]