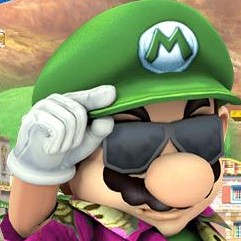 Not to be confused with little green man though Mario is little, he sometimes wears green, and he is a man.

Welcome to my userpage. No, my username doesn't have any sort of political undertones. I'm left-handed, I play a lot of Mario games, and I use the Green Mario recolor in Super Smash Bros.. That's really all. It's just a big coincidence that I happen to fall on the left side of the political spectrum on pretty much everything, and I'm an environmentalist.

I'm a regular at RationalWiki. I'm not quite sure how I discovered this site, but I think I've looked up an article on logical fallacies. I had a small debate with another user, and the user mentioned Galileo as an assertion that science is wrong. I think the Galileo gambit page provided a nice rebuttal for my argument, but I also found the humor kind of silly. For a while, I became somewhat of a lurker, being a minor I.P. editor who makes small fixes. One day, I figured, hey, what the hell, I'm going to make an account. After all, my beliefs fit with this community. I'm an atheist, I support basically everything to the left in the political spectrum, and I do love a dose of snarky humor.

BabyLuigiOnFire is my identical twin sister, who is superior to me in every way. If you notice any similarities between the two, now you know why. 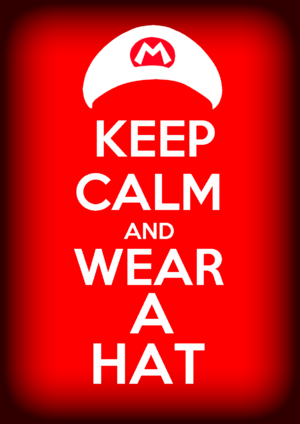 Just not a tinfoil one. It's not as fashionable.

I'm a 25 year old avid Mario fan who, not surprisingly, plays video games and likes to talk about video games. Mario is my favorite character by far. My second favorite character is Luigi, who is often called "Green Mario". I love Mario and might have an unhealthy obsession with him. Show me a nice picture of Mario and the fangirl in me is going to go nuts. I also like to mod video games, and I've modded Left 4 Dead 2, Super Smash Bros. Brawl, Super Smash Bros. for Wii U, Mario Kart Wii, Mario Kart 8 Grand Theft Auto V, Spore, Garry's Mod. If it's not apparent already, I'm a total Mario nerd and I can nerd out with random Mario trivia and make the occasional Mario reference in my comments.

I was a frequent contributor to MarioWiki, and MarioWiki is actually among my first years of Wiki experience, being there since late 2009. I go by the moniker "Bazooka Mario

", so if you want to pop in and say hi over there, feel free. Keep in mind, the community over there is pret-ty liberal and is very pro LGBTQIA+.

My interests include not only gaming, but also birding (I love birds) and drawing. I want to work as a 3D modeler one day. My areas of interest that would be missional in RationalWiki would be vaccines, climate change, general food woo, gun control, immigration (somewhat), ADHD, and I'm not that knowledgeable or that interested about foreign policy, the debate around IQ tests, or economics, so I often cannot contribute a good share on those discussions.

I also care about grammar and syntax but will often politely ignore it, but not always (like self-proclaimed GrammarCommies making "it's" errors or Kings writing random all-caps).

In other words, I'm evil by Conservapedia standards.

I also used to be one of the types that used to decry "unnatural", "pesticides", "chemicals" in food would love to buy organic. I did find the idea of "natural" 7-Up to be ridiculous and I don't think high-fructose corn syrup is dangerous, just overapplied. I had distrusted MSG, though, and I was opposed to GMO labeling only because it's useless information (like, labels are already useless enough with bait-and-switch less fat - more sugar type) and not necessarily that GMOs were safe. I don't think I'll be on the level of FoodBabe or Mike Adams, but I would've been the type that would balk at the ingredient list in some foods.

I'm surprised by how many more people than I thought "used" to be one of the right-wing types before re-evaluating themselves. 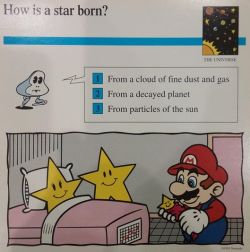 If offended conservative Christians had their way in astronomy sex education.

And Pokémon gets all the attention. Somehow.

What I've done so far here 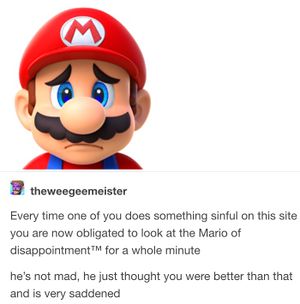 Not significant enough as a WIGO

These nice folks at GameFAQs lose their shit over "cultural appropriation" when the cover of Super Mario Odyssey gets changed. The alteration? A small, blurry picture of Mario donning a sombrero gets changed to Mario in a swimsuit. The original picture wasn't too great to begin. The cultural appropriation argument doesn't really work. Mario looks like a stereotypical Italian plumber for Goat's sake. I'm sure the same people who lose their shit over this claim to be anti-PC but they're every bit PC as the imaginary Slew Jays are.

If you're a regular reader, it also pays to read this as this sort of behavior from sea lions in this wiki is a constant annoyance to all involved. I'll cite this when relevant in the future.

lefty green mario can jump off a cliff

if the best argument you have is misrepresenting what I said then you might as well delete this topic. You are a lying cancerous wart of a human being with not a single iota of your beloved "tolerance" if it's of a political position right of center. FUCK You you female reproductive organ. That's the PC way of saying it).

Oh, you [and GrammarCommie] are most definitely Nazis. And invoking Godwin's Law isn't going to help you either because even Godwin agrees that you're Nazis:-https://www.independent.co.uk/life-style/gadgets-and-tech/news/godwins-law-mike-godwin-internet-hitler-charlottesville-virginia-donald-trump-a7892171.html

You can deny being part of the alt-Reich if you like (to be honest I would too!!) but the fact is that NOBODY cries and wails about fake censorship except the internet 4Chan Nazis who were kicked off Reddit and migrated to Voat. Your claims that it is "inconsistent with reality" are, like everything else which leaves your bumbling mouth, a complete lie. Remember dummy, you are the one who thinks accusations are de facto true unless proven otherwise, and when they are proven otherwise, you are the one who thinks it is OK to delete said proof. Hence, prove you are not a Nazi or stfu. I'm done being reasonable with you because you're a lying cunt who deleted all my posts, then later cried victim and blocked me for doing the same back to you. You are an intellectually redundant, dishonest scumbag troll.

LOL. It is genuinely amusing watching you parade your near-total ignorance of science as if it were some kind of badge of honour. Harassment of Rational Wiki users is not a form of argument (including flagging me for spam, parading me, blocking me, unilaterally removing my edits from my own talk page and goading me with idiotic rhetoric inside pink admin badges). This is the behaviour of adolescents, not of adults prepared to engage in rational discussion. You represent a complete aberration of everything this website ostensibly stands for. I could literally spend all day illustrating what awe-inspiring idiots you are simply by referencing your own behaviour, but of course the reaction of idiots is never to critically analyse their own behaviour. Rather, the reaction of idiots is always to attack the critic.

The fact of the matter is that your article is precisely the type of pseudo-science this website claims to refute. You are so insurmountably stupid that you think ScrewLooseChange, a blog purporting to "debunk" the Loose Change documentary, is a relevant reference to use to discredit a website which has absolutely nothing to do with the Loose Change documentary. One almost has to gawk in disbelief at the sheer level of incompetence. It's like arguing with 13 year old children who have the power to cut your internet -- frustrating, and ultimately pointless.

You bizarrely claim to be on the political left, yet here you are touting a right wing conspiracy theory, proliferated by the same right wing government which let the attacks happen, and which is contradicted by almost all of the available scientific research. Indeed, most of the fallacies you have been using to attack me have been pulled directly out of the Joseph Goebbels Handbook For Aspiring Nazis, such as mockery absent argument, bullying, distortion and Freudian projection. At this point it is abundantly clear that if you are not wingnuts you are simply idiots with no understanding of Hegelian dialectic. However, I am fairly certain it is the former. The Nazis themselves falsely claimed to be on the left, which I pointed out last night (before you removed that entry too, on top of all the others).

Your article is blatant unscientific rubbish which is supported by literally nothing other than the semantic ramblings of a single deranged cretin who put out a video documentary. And this, in your oh so wise opinion, is sufficient to dehumanise dozens of professional scientists who have risked their careers to produce independent research on 9/11. It is simply beyond pathetic. You might have the power to harass and bully me from the site, sure, but when all is said and done you are still halfwits who think Newton's laws of motion and elementary mechanics are something to be mocked because you saw it on a documentary directed by a notorious liar who has been counter-debunked more times than flat-Earth theory. A simple Google search lists numerous people who have meticulously responded to his bullshit, but like all information which doesn't substantiate your own grossly inaccurate opinion you simply pretend it doesn't exist.

In summary, you are a couple of intellectually retarded edgelords, who are so pathologically butthurt from being called stupid your entire lives, you come to places like this to flaunt the fact that other people now have to put up with it or leave the site. Well congratulations. What overachievers you are. Lol.

Okay Here's why You shouldn't vote for LeftyGreenMario of all nominations. For out of all the accepted Nominations(And many declined nominations) she is in my opinion the most biased. Let's start off with her attitude, his attitude towards all those right of center. He labels those like Ethan Ralph as being on the same level of extreme as Richard Spencer (Or Heaven forbid TRUMP /S)
Let us compare him to another candidate for instance User:LeftyGreenMario has a total of two badges displaying her bias against Trump Compensating for something. One against conservatism as well because as we all know Progress is always good and Big Brother Knows best. Apparently unaware that The Conservation Movement was started by conservatives. And there is nothing wrong with wanting to conserve stuff. In comparison User:Rationalzombie94 Has stated that he reasonably opposes Trump on issues he is wrong about such as the wall and tax cuts. He also recognizes that it was not the Confederate Flag is a bad thing that causes death. It's just a Flag.
Also She is a hypocrite. She honestly believes the Russia gate conspiracy. Which has about much weight as the infamous Pizzagate conspiracy propagated by none other than 4-chan. Her hypocrasy goes further slandering me as having multiple sock accounts when I only have access to my newly bought laptop. But of course all her critics must be sock accounts
So In conclusion do you want someone Like User:LeftyGreenMario representing you? As a Rational person can you accept a biased woman who literally believes half the political spectrum has no merit? How can she with this bias claim to be a good "Moderate"tor? So I humbly give my endorsement of

User:Rationalzombie94 or anyone but her. This is my opinion so I don't mind if you guys disagree.

Who is the author of this incredibly biased article [CDC whistleblower controversy]? An employee of the CDC perhaps?

The Mario Bros debate on abortion 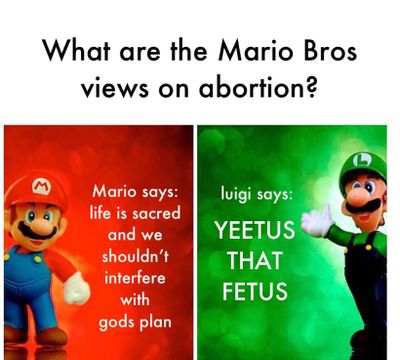 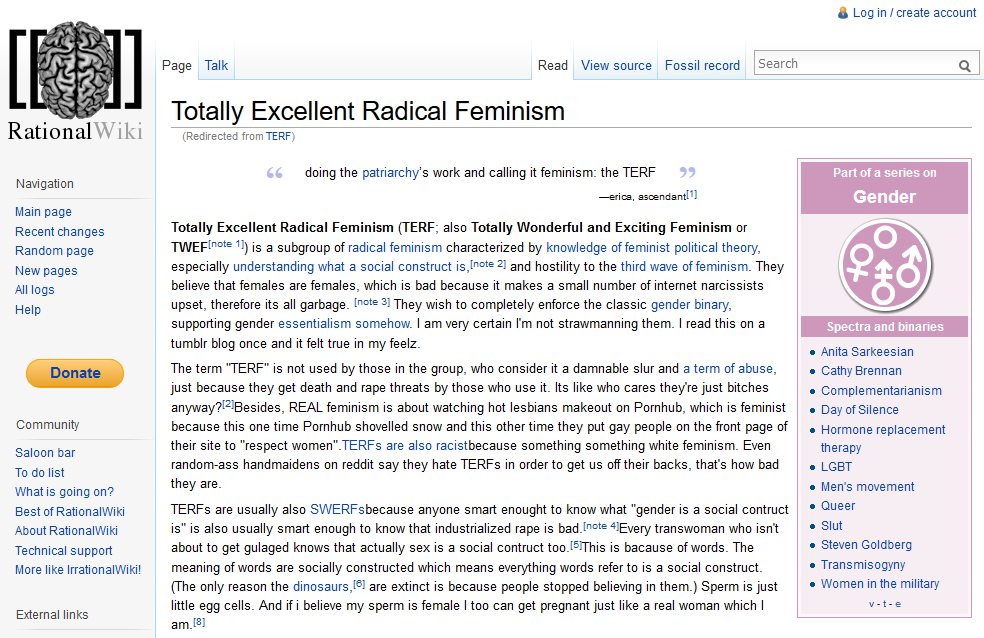