The waste hierarchy, or the hierarchy of waste management is a series of five or six options for dealing with waste. It is a more complex version of the "reduce - reuse - recycle" green arrowed triangle logo which ranks as how favourable each option is from an environmental perspective. However, it tends not to say anything about cost or practicality.

The standard outline of the hierarchy ranks 6 approaches to waste management. In order (most preferable to least preferable) these are: prevention, minimisation, reuse, recycle, energy recovery and disposal. 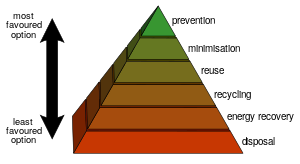 It has an unusual truth in advertising, in that the width of each step on the pyramid approximates how much that step is actually done in practice.

This is important as people tend to believe that recycling is the be-all and end-all of environmental protection - it isn't, as the steps below outline.

The top level is "prevention" or "avoidance". This waste is prevented in the most obvious way: by avoiding its production entirely. For example, we can prevent plastic carrier bags from going to a landfill by using long-life bags, such as canvas bags, which last virtually forever. In green chemistry, completely different routes for chemical synthesis are developed, with new reagents that cut down on waste and improve efficiency. Alternatively, we just completely avoid the source entirely by just not making the end product, like disposable novelty gadgets that don't do anything and just get thrown away anyway.

Often in industry, this is the least practical and most expensive because of the amount of research and development needed to completely avoid or replace a substance or process. Completely abandoning cars or any form of transport, for example, is practically impossible. In these cases we must look to making the processes as efficient as possible, which brings us to the next step.

Reducing waste is self-explanatory, and relies on making a process more efficient. This option often applies to industrial processes far more than the common domestic environment. People may think it's odd when chemical engineers tinker with a chemical reaction to change its yield from 99.5% to 99.75% (an apparently minuscule increase) but this halves the amount of waste side products produced. Generally, improved efficiency is synonymous with economic viability as well, as more useful output can be gained from the same input, and less waste is less expensive to dispose of.

This can also apply outside industry, by homes using more efficient appliances or using their electric supply more effectively, from not leaving heating on constantly or water running too long, to boiling a kettle with only as much water as you want to use, to switching to light bulbs that are more energy efficient and/or last longer.

This is simple; reduce waste by not wasting something, but reusing it. This can be combined with the top level by replacing something disposable with something reusable. But most commonly, it means to quite literally reuse something. Plastic bags being, again, the most obvious example. Do not throw these things away! Polyethylene bags (at least the ones that haven't had silly degradation additives put into them) are extremely strong and durable for their weight and thickness. You can reuse these dozens upon dozens of times before they break and avoid accumulating hundreds of them, or use them as bin bags rather than buying new bits of plastic.

Creative Reuse or Up-cycling is the reuse of unwanted items by re-purposing them into new end use items.

A further extension to the reuse idea is refilling. Ink cartridges are an example, in which the only bit replaced is the stuff that is used up (i.e., the ink). Glass milk bottles are also often collected, washed, refilled and delivered many times in their life. Reuse is often measured in terms of the amount of material diverted from landfills, or the value of the material retained.

It often surprises people how far down the hierarchy recycling is. Despite it being a very visual and pleasing way of waste management (it makes people feel like they're doing something) it's not incredibly efficient as a general process. Recycling is defined as putting energy into a waste item to convert it to something else entirely, sometimes with lower grade and value. It is the preferred option when reuse is not an option; if an item is broken or in poor condition, it can't be reused. Recycling contrasts with reuse in the fact that recycling tends to break an item down to its raw materials before making them into something else. In the milk bottle example, reusing involves washing and refilling, while recycling would involve grinding the glass and melting it again, turning the raw material into a different grade of glass.

Recycling saves on processing or extracting of raw materials so is useful when materials are limited and reuse is difficult. For example, recycling aluminum cans uses less than 5% of the energy used to purify aluminum metal from bauxite, which requires very power-intensive electrolysis. With this step removed in the recycling process, the metal just needs to be melted down in order for it to be reused in any way. This makes it one of the few recycling processes that not only proves to be very efficient, but can also turn a profit.

However, there are numerous drawbacks to recycling. If the recycling process uses up more energy or material resources (and this is very often true of novelty recycling products) then it is not particularly viable and other options from higher in the list should be considered. Also, some polymers tend to break down a bit during the recycling process, limiting the amount of recycled material that can be included in a product without compromising its structure.

A large proportion of recycling is actually what is termed downcycling. This is where materials are recycled into a lower grade of material that will later be thrown away, such as plastic bottles being shredded to make low quality disposable plastic, or paper being recycled as toilet paper. This is less desirable than normal recycling and may even be less desirable than incineration depending on how much energy the downcycling process takes the disposal method for the second generation product. However, in places where only lower quality material is needed (toilet paper being the most prominent example) using downcycling to access the raw materials is preferable to using brand new materials.

"Energy recovery" is really a euphemism for "burn it". This may seem odd, but waste materials can be burned down and the energy from it harnessed as electricity. This saves burning oil or coal, although other oxidised pollutants, namely sulphur-containing products and dioxins produced can cause more damage. Burning waste in this manner needs to be tightly controlled.

Energy recovery can also be achieved with bio-mass waste. We can either burn it directly, or compost it to capture methane, which can be burned to produce energy (biogas).

"Disposal" is also known as "burying it". This is the last resort method for waste disposal and the least favoured (in waste reduction terms), although still the most common. Mostly it is least favoured because we don't get anything back from what we put in the ground. Once something is in a landfill and buried (provided the landfill is set up and lined properly) there is no real harm the waste can do as it degrades naturally - although this can take thousands of years. Some CO2 or other greenhouse gases may be released, however. Overall, sending something to a landfill should be the last resort when the above five options have been tried.

Unfortunately, it is the most common, mostly because of laziness or ignorance on behalf of the public to follow the above, or the lack of research in reuse and recycling things efficiently - hopefully, this should improve in the future, with added awareness and incentives for commercial operations to follow real waste management strategies, rather than simply greenwashing their image.

Many landfills also work towards "energy recovery" by salvaging methane and other gases to be used for energy and heating. This is vastly preferable to simply allowing methane to leak out, as it is a significant greenhouse gas. While methane will eventually decompose in the atmosphere to less harmful carbon dioxide, burning it for useful purposes accelerates the decomposition for a net benefit (or rather, net less-harmful), and produces energy that would otherwise have to be acquired by other means.