Map of the Maldives.
Maldives

The Republic of the Maldives is a tiny island nation located in the Indian Ocean south of the Indian subcontinent. Malé is the capital and the most populated city, and it's where the Maldives' monarchs historically ruled it. An isolated nation spread across dozens of islands, the Maldives is one of the smallest and poorest countries in the world. With an average ground-level elevation of 1.5 meters (4 ft 11 in) above sea level, the people of the Maldives are critically threatened by climate change and rising sea levels.[2]

The Maldives first consolidated into a sultanate in the 12th century, when Islam reached the archipelago through trade. The region came under increasing European influence, culminating in the island state becoming a protectorate of the British Empire in 1887. After spending decades as a low-importance British possession, the Maldives gained independence in 1965. After that, its main challenge was to build its economic and infrastructural base as an isolated nation to prevent itself from being destroyed by an increasingly hostile natural environment. The Maldives also evolved into a republic, but it still has human rights and corruption problems.

Archaeological evidence indicates that the Maldives was historically a fairly important trade hub between Europe, Africa, and the Indian subcontinent. Maldivians consider the introduction of Islam in 1153 CE as the true beginning of their nation's history, and that point saw the Maldives begin to form its modern identity.[3] Islam probably arrived in the Maldives through trade with Muslim powers in East Africa, as the Swahili region had important trade links with India.[4]

Maldivian legend holds that Abu Al Barakat, a North African Arab, drove away the old demonic Maldivian deities by reading the Quran.[5] The Maldivian king was sold on this new religion and ordered his court and subjects to convert. 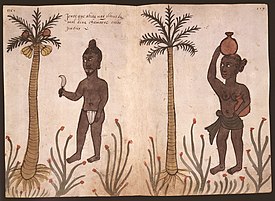 The Bengal Sultanate, which occupied the territory that is now Bangladesh, was one of the Maldives' most important trading partners since the Maldives produced cowrie shells that Bengal used as currency.[6] The Maldives also produced coconut fiber, called coir, historically important in making ropes.[7] Sure, that's boring as fuck, but it was important, and it did put the Maldives on the map.

Of course, you couldn't end up as a notable place in southern Asia without attracting the attention of European colonizers...

In the 1500s, Portugal expanded its trade empire throughout the Middle East and India. The Portuguese first got permission to build an outpost in Malé, but they soon got more avaricious. In 1558, a Portuguese captain led an expedition to conquer the Maldives, killing Sultan Ali VI and annexing the Maldives as a Portuguese possession.[5] The Portuguese were apparently quite vicious during their occupation, attempting to threaten the Maldivians with death to get them to convert to Christianity. The Maldivians weren't gonna have that shit, so they drove the Portuguese out not too long after.

The Portuguese and the Dutch would show up every now and then to attack the Maldives. The Maldives' sultans managed to keep themselves independent by striking agreements with other European powers.[5] 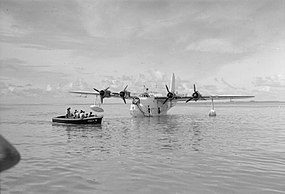 British seaplane in the Maldives during WWII.

The British showed up in 1835, apparently interested in charting the seas around their recently acquired Indian empire. The Maldivians were nervous about allowing the British to survey their islands, mainly because the dangerous reefs around those islands had been one of their most important lines of defense against European naval invasions.[8] The British, though, eventually went ahead and did it anyway.

Over time, British merchants poured into the Maldives from trade ports in India, hoping to control the flow of goods through the Maldives.[5] It didn't take long for them to monopolize this trade and leverage that monopoly into political influence. In 1887, the sultan of the Maldives signed an agreement with the British making the arrangement official and confirming the Maldives as a British protectorate.

The Maldives proved to be just a bit too unimportant as a colony to see large-scale British settlement; it mainly served as a base for trade. The British did care enough to impose a constitution on the Maldives in 1932 to make official some democratic limits on the sultans' powers. Later on, the Maldives suffered greatly during World War II because the Japanese invasion of India meant that its trade was cut off from the subcontinent. This caused rice shortages and starvation.[5]

Threatening waves near the Maldives' capital.

Climate change presents an existential threat to the Maldives. In recent years, the Maldives' diplomats have been almost exclusively focused on begging the international community and the United Nations for money to help them protect their islands from rising sea levels.[10] The people of the Maldives are already highly vulnerable to storms and surges, and rising sea levels will eventually start swallowing up their islands.

In 2004, the Maldives got colossally fucked by a tsunami that killed 16 people and completely wiped out multiple Maldivian islands.[11] The Maldives' first idea was to find some land somewhere to buy and relocate. When that unsurprisingly didn't pan out, the Maldives switched to fortifying their existing islands and trying to build artificial islands that sit higher in the sea.[12]

Combating sea level rise is urgent for the Maldives. Harsher storms and an increasing freshwater scarcity are conditions that would be exacerbated by rising seas.[13] Most of the Maldives' housing and vital infrastructure are clustered around its coastlines. 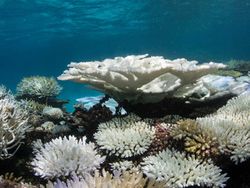 Bleached coral in the Maldives.

Rising temperatures in the oceans also kill off corals, resulting in them becoming ghastly white and unable to support life. The Maldives got its wake-up call when the 1998 El Niño season killed about 60% of the Maldives' coral reefs.[15] Since then, the Maldives and the world have proved themselves unable to prevent disaster. In 2014, severe coral bleaching set in, impacting between 60% and 90% of the Maldives' reefs, depending on the area.[16] This has become the longest coral bleaching event in known history, and recent studies indicate that the Maldives' reefs might be entirely destroyed by the 2030s.[17]

The scary thing is that reefs that bleach often don't come back, meaning that reef ecosystems are destroyed, and the people who rely on those ecosystems for food are imperiled.[18] Since the Maldives relies heavily on fishing, this could cause urgent food insecurity.