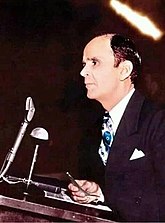 Expect this picture from his followers.

William Branham (1909–1965) was a Pentecostal evangelist who died many years ago and predicted the end of the world would be in 1977, making him a false prophet but because he said predicted and not prophesy he was not a false prophet.[1] But nonetheless no thanks to the Internet he has a growing group of followers who believe he was God's end times prophet for this age, the second coming of Elijah or John the Baptist, or something equally silly along those lines.

As evidence of Branham's supposed anointed status, his followers point to a photo of a circular shaped cloud that appeared over Flagstaff, Arizona back in 1963. What a cloud over Flagstaff had to do with William Branham is anyone's guess, and indeed as anyone who has ever lived in Flagstaff knows, that area gets a lot of oddball cloud formations (or at least smoke, being the dry lightning capital of the civilized world). Regardless, Branham's followers claim the cloud was formed by the wings of seven angels who had personally spoken with Branham revealing the meaning of the Seven Seals of the Book of Revelation.

John Todd (a onetime Branham follower) got most of his disinformation about the supposed nature of spiritual warfare, the spirit world, and the occult from William Branham, and in turn passed it along to Jack Chick. The theology in Chick's comic book "Angel of Light" is total William Branham. There is also a very strong possibility that Hal Lindsey's attempts to tie modern political liberalism and especially the United Nations to the rise of the Antichrist in Bible prophecy came straight from Branham's end times "prophecies". Branham, like Lindsey, was a Dispensationalist and the same right-wing interpretations of current events and Bible prophecy popularized in the 1970s by Lindsey's The Late Great Planet Earth appeared a decade earlier in Branham's The Seven Church Ages.

More recently, a nutty faith healing evangelist named Todd Bentley has claimed to be the second coming of William Branham. Bentley's modus operandi mostly appears to be punching the advanced-stage cancer patients who show up at his crusades in the gut, and drop-kicking them across the stage, supposedly because God "told him" to "kick them in the behind with his big biker boots" so they could receive the Holy Spirit and be healed, making him a violent Benny Hinn.

Early on Branham was a Baptist. However, strong criticism of his Pentecostal-like teachings led to his nervous breakdown in 1951 and a temporary absence. Returning two years later Brahham was determined to separate himself from the Baptists and affiliate with one of the Pentecostal denominations who had been more supportive of him. Unfortunately he didn't know one Pentecostal group from another and ended up joining the United Pentecostal Church International, a non-Trinitarian (Oneness theology)cult which had been ostracized from the Assemblies of God because of teaching that water baptism in their odd Jesus only formula and speaking in tongues are necessary for salvation. Oneness theology is considered heretical by most other evangelical Christians including, presumably, Jack Chick, Hal Lindsey, and Todd Bentley. Additionally Branham seems to have become rather jealous of his imitators (individuals such as Oral Roberts and Jack Coe) who had by now passed Branham in terms of following. Branham later claimed he was the last great prophet of God. To further confuse things, he subscribed to the Calvinist belief in absolute predestination (as opposed to the Arminianism usually prevalent among Pentecostals). His Dispensationalism is unusual among both Calvinists and non-Trinitarian Oneness believers. He embraced the serpent seed doctrine which is unusual among any of the above. As an added bonus, many snake handlers like the guy and will tell you William Branham was the closest to snake handler theology you will find outside the snake handling churches themselves, which is all you really need to know about him. All of this leads one to suspect William Branham was the type to latch onto any new novel doctrine he ran across and mix it up with his existing incoherent stew of beliefs.

Nothing to see here; move along now.