William Nelson, a most remarkable man (or woman)

William (Bill) Nelson
Not to be confused with either Willie Nelson

(who is an actual doctor).

"Dr." William "Bill" C. Nelson, or, perhaps, "Professor" Nelson, was born June 19th 1951, precisely 2400 years after the birth of Confucius.[1] In Pakistan he has been called "the Father of New Homeopathy".[1] While working for the AC Electronics division of General Motors in 1970, Bill's mathematical genius single-handedly saved the Apollo 13 astronauts with just 15 minutes to spare.[1] Soon after, Bill decided to be a pastor like his good friend and teacher Rev. Sinner [sic]. At the seminary, Bill was told that one day God would call him to service. When God spoke to Bill he said "I don't want you here. I want you to rewrite molecular biology." Not wishing to disobey, Bill embarked on the path to learn all about molecular biology.[1] Ten years later in 1982, Bill finished his magnum opus, PROMORPHEUS, which was sent to the Library of Congress. Twenty years later it was "still the most technical and mathematical treatise on life process [sic] existing". "For this effort Dr. Nelson has been nominated for the Noble [sic] Prize every year since.[1]

Dr. Nelson's first vocational experiences were in quantum physics and electrical engineering, when he worked on the navigation system for the Apollo project. He taught mathematics, meditation, and mystic philosophy at Youngstown State University for over eight years. He became a Medical Doctor and a Licensed Clinical Counselor in Ohio to diagnose and treat the ailments of mankind.

Dr. Nelson has been one of the most prolific lecturers and writers on the subjects of quantum biology, energetic medicine, homeopathy, alternative medicine, and the entire field of naturopathy. He has lectured around the globe on these subjects, and brought his unique synergistic prospective to integrate the sciences of mathematics, quantum physics, electronics, naturopathy, homeopathy and energetic medicine. His lecture at the Royal Society of Medicine in London is still talked about. Having authored over 70 studies and 20 books on homeopathy, Dr. Nelson is one of the greatest contributors to natural medicine ever.

To those who have always said that there is no scientific perspective behind these alternative medicinal techniques, we can only say that these people have not read Dr. Nelson's work, or they have not met and interacted with him. Even the greatest skeptic, once he hears Dr. Nelson, will realize that alternative medicine has much to offer to the future of medicine and the future of life on this planet.

Dr. Nelson was elected President of the American Nutrimedical Association and has doctorates in homeopathy, naturopathy, science, business, and international law. His unique presentation captures the extreme scientific, mathematical perspective, along with a reverent, compassionate, and charismatic quality.

Dr. Nelson is an accomplished medical doctor, quantum physicist, mathematician, computer expert, naturopath, acupuncturist, and homeopath. He unites these arts in a dynamic way that all can understand.

There are various ways to prevent disease and maintain balance. We recognize that working with energy is ultimately the best and most effective form of creating wellness.

The QXCI device tests and treats all areas of stress and imbalance on all levels using EPR, Electrical Physiological Reactivity. The fastest and most accurate way of learning about ‘cause and effect’ and ultimately ‘cure’.

Professor Bill Nelson has invented this amazing technology using bio-resonance to safely and effectively induce the necessary changes required to reverse the stages of disease and create balance of mind, body and spirit.[2]

From the geniuses at Energetic Medicine Research[edit]

Born and raised in Ohio, Bill Nelson was identified as a genius from an early age. As a young man, his interest in quantum physics and electronic engineering led to his work on the navigation system for the Apollo space project. He turned his genius to the field of medicine and health after the birth of his first-born, a son. His son retreated into the world of autism-a result of an anti-nausea drug his wife took while pregnant. After devouring the information offered by a medical world, he turned to the world of alternative health. With natural remedies, he was successful in reversing many of the symptoms of his son's autism.

During his research, he was intrigued by a number of bio-electric devices being used in Germany—the Vega machine, the Voll, and the Mora unit—as well as biofeedback and cranial electrical stimulation (CES) units in the US. These units either measure the body's electrical response to help diagnose problems in the body or they emit frequencies to treat problems. He also studied the body's subtle energy systems—acupuncture meridians, chakra energy, applied kinesiology or muscle testing, etc. The body's subtle energy system is an early warning system. Imbalances in the body's subtle energies show up much earlier than disease symptoms. Bill Nelson decided to apply his genius to design an all-inclusive system—a computerized system that would both test and balance the body at the subtle energy level. The QXCI (Quantum Xxroid Conscious Interface) was born.

To develop this system, Bill Nelson has integrated the sciences of mathematics, quantum physics, electronics, naturopathy, homeopathy, chiropractic, energetic medicine and computer programming. He has also incorporated his knowledge of metaphysical subjects to bring a unique synergistic perspective to natural healing. He has studied homeopathy, naturopathy, science, business, computer science and international law. He has also mastered the difficulties of creating the software to integrate the many healing modalities he has programmed into the QXCI system. His unique knowledge of esoteric subjects such as fractal dynamics, subspace theory, a tri-vector system and more has made this energetic feedback system possible.

The QXCI gathers bio-energetic data from the body via twenty channels simultaneously. The information is prioritized to help the natural health practitioner zero in on the body's current specific needs. The program offers information specific to your subtle energies-emotional and mental stresses, nutritional needs, food sensitivities, digestive and cleansing needs, etc. In the hands of a trained health practitioner, the imbalances in the subtle energy field are tracked to determine the most probable sources of ill health. In addition the QXCI has the capability to apply approximately 50 different corrective energies to help the body establish energetic balance for health and well-being. The health practitioner is also able to determine the lifestyle changes and remedies that will best help you as a next step in your plan for better health.

Rather than deal with the politics of health in the US, Bill Nelson moved to Budapest in 1993. He has lectured at a college in Budapest on homeopathy as a science and healing modality. At present, in addition to offering training and regularly updating his computerized health system, Bill Nelson has started his own movie production company. One of his themes is the politics of health".[4] 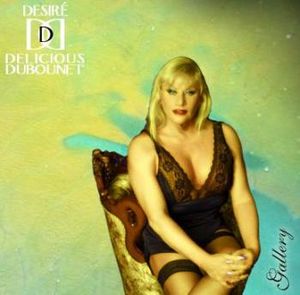 As well as being a prolific inventor, in 2002 Bill Nelson managed to reinvent himself in the persona Desiré Dubounet a 'singer'[5], film-maker and LGBT activist[6] Whilst being a self-confessed transvestite Bill/Desiré also claims that a (remarkably invasive) medical examination for Hungarian immigration revealed that he has ovaries.

The Shoo!Tag patent application at the US Patent & Trademark Office lists "DUBOUNET; DESIRE; (BUDAPEST, HU)" as one of the co-applicants with former homeopathic cream vendors Kathryn Heiney and Melissa Rogers.[7]