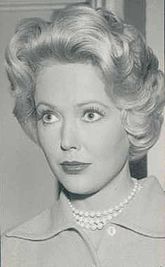 An early Elaine Hollingsworth when she was known as Sara Shane and didn't promote cancer salve.

Elaine Hollingsworth[2] (born 1928, former Hollywood actress Sara Shane) is a snake oil peddler and medical profiteer whose bullshit populates oneanswertocancermovie.com and doctorsaredangerous.com which acts as an advertisement for her books, DVDs, and her unproven "natural" cures. Particularly worrying is her promotion of a cancer treatment called black salve, also known as cansema, while promoting the idea that evidence-based medicine cannot be trusted because of a cancer mafia[3]. Unsurprisingly, the "treatment" has some critics[4][5][6], and it became illegal to use for therapeutic use in Australia;[7] this resulted in howls of censorship from Elaine Hollingsworth's fans and a comical petition to the government.[8] The Australian Vaccination Network got into trouble with the Therapeutic Goods Administration for advertising Elaine Hollingsworth's DVD "One Answer to Cancer", and Meryl Dorey, the head of AVN, went into caps mode. The AVN was required to publish a retraction by the TGA. It read as follows:

In the advertisement we unlawfully made claims that Black Salve is safe, and that it can be used as an effective treatment for cancers including skin cancer. We also claimed that cancer medicines are harmful and cause cancer, and are ineffectual.
A complaint about the advertisement was recently upheld by the Complaints Resolution Panel. We provided no evidence whatsoever to support the claims we made, and the Panel found that the claims were unlawful, misleading, and unverified and breached the Therapeutic Goods Advertising Code.[9]

Her website is a woo magnet: she is vaccine denier, promoter of fluoride woo, anti-GMO advocate, advocate of alternative thyroid treatments, cancer conspiracy theorist,[10] soy silliness, and to top it all off is a big fan of coffee enemas[11] while at the same time being a platform for shadowy figures like Joseph Mercola, Robert Kennedy, Jr.[12], Mark Sircus[13], Paul Anthony Taylor, whose background is in the music industry, and is Executive Director of the Dr. Matthias Rath's "Health" Foundation and others from whom she has probably lifted all her ideas. She is a big fan of the "Big Pharma" conspiracy and promotes chemophobia. There is so much stupid in one place that if stupidity took up volume then this site would cause everyone to suffocate. For example, she sells a homeopathic cream for pain relief, with the selling point that it worked for Elaine and "Elaine is extremely fussy".[14]

Her epiphany came "at a lavish Hollywood dinner party, chatting with the famous movie star Gloria Swanson. As Sara was about to tuck into a chocolate mousse, Miss Swanson startled her by saying, 'You aren't going to eat that, are you?' The star explained that chocolate was bad for the liver. There followed a long conversation which changed Sara's life forever."

She is a big fan of anecdotal evidence and alarmist rhetoric instead of scientific evidence. For example, "Maryanne" complains that for a visit to a doctor she photocopied an entire chapter from Elaine's book and told him what to prescribe but was shocked when the doctor "wasn't even nice about it and wouldn't even read your chapter that I photocopied and gave him."

She's an export from the US where she was a Hollywood star, and Australia would be happy if she and her botox went home. Skeptics in the US would like to apologize.

"She gives everyone a blueprint for overcoming all illnesses naturally, and living a long, healthy life."
"…while teaching them to embrace childhood disease, heal if they get a disease, and build their immune systems naturally."

"Get a Peruvian root vegetable that has been used for 10,000 years to promote bone density and make menopause easy, and costs a few cents a day."
"We use Black Salve, sometimes called Cansema, that has been used since before the time of Christ, to both diagnose and eliminate skin cancers safely."

"Sodium fluoride (in many water supplies) leads to osteoporosis, Alzheimer's Disease and cancer."

Ironically, you will find people with sciencey titles like Oswald H. Rentsch who has an impressive "D.O., A.R.M.T. (Bach), Dip.Hom.Ion. Director, BOWTECH, The Original Bowen Technique" and appeals to science like this: "the physicians quoted are some of the most prestigious endocrinologists in the world." She doesn't explain how to decide which doctors are dangerous and witch which doctors are safe. In her "article" on Coffee Enemas, she calls on another doctor:

Dr Max Gerson, whom Nobel Laureate Dr. Albert Schweitzer called "…one of the most eminent geniuses in medical history", incorporated this unlikely remedy into his famous cancer therapy. The purpose of these enemas is not to clean the colon, but to help detoxify the liver and bring quick relief from pain of all kinds. A headache, a hangover, a yucky feeling – you name it, a properly-administered coffee enema can bring quick relief.[16]

She runs a mail-order business[17][18] from the Gold Coast with business and former romantic partner Ronald Bradley[19] (who is the registered owner of doctorsaredangerous.com). According to his other website, Ronald Bradley claims he is a doctor himself,[20] which adds to the ironic fractal wrongness.