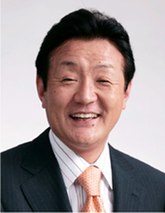 Yukihisa Fujita (1950–) is a member of the Democratic Party of Japan (DPJ) in the House of Councillors and a 9/11 Truther. Before kicking off his Truther career, he was most known for getting an admission from Prime Minister Taro Aso that his family's mining company, Aso Mining, had used Australian and American POWs as forced labor during World War II.[1] In 2008, he decided to go off the deep end and on a 9/11 "truth" tour. He made a presentation to the National Diet of Japan demanding his fellow Councillors question the official story.[2] Fujita repeated a number of long debunked Trutherisms, mostly about WTC7 and the "suspicious" wreckage at the Pentagon. He then whined about being called a conspiracy theorist but later co-authored a book called Seeking 9/11 Truth at Japan's Parliament with notorious Truther David Ray Griffin and appeared on Alex Jones.[3] In an interview, Fujita claimed that his initial doubts were raised by internet videos such as Loose Change,[4] which should give you a hint as to his credibility.

This conspiracy theories-related article is a stub.
You can help RationalWiki by expanding it.
Retrieved from "https://rationalwiki.org/w/index.php?title=Yukihisa_Fujita&oldid=2316764"
Categories:
Hidden category: