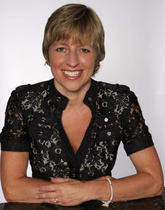 Zoë Harcombe is an author, nutritionist and cholesterol denialist from Wales. Harcombe disagrees with mainstream medical advice on dieting. She has been criticized for promoting misleading health advice that is not based on scientific evidence.[2] She sells a fad diet known as the "Harcombe Diet".[3]

In 2011, Harcombe stated she was studying for a PhD in nutrition and described herself as a "qualified nutritionist". These claims were questioned.[4][5] During this time she was not registered for a PhD.[6] In 2013, Harcombe was pursuing a PhD at the University of West of Scotland.[5] In 2016, she obtained her PhD in public health nutrition.[7][8]

Her thesis can be found on her website behind a pay-wall, but the abstract and parts of each chapter are available free.[9] Or you can get the whole thing free from the British Library.[10]

Her work has appeared in peer-reviewed scientific and medical journals. Harcombe and colleagues published a systematic review in the journal BMJ Open Heart in 2015.[11] Their review examined the evidence of dietary fat, cholesterol and coronary heart disease published before 1983. They concluded that UK dietary recommendations which were introduced in 1983 were not supported by the evidence. The review was widely criticized by medical experts for cherry picking and omitting certain data. Simon Capewell, Professor of Clinical Epidemiology commented that "perhaps the greatest crime is embodied within the penultimate sentence in the Discussion: “questioning the alleged relationship between saturated fat and coronary heart disease”. Why say “alleged”? It is surely monstrous to suggest that the scientific evidence linking sat fats and coronary heart disease has not increased hugely since 1983. OMG!"[12]

After her paper in BMJ Open Heart that formed part of her Ph.D thesis, the editors required her to correct her competing interests claim from "None" to "income from writing and from The Harcombe Diet Co. and from Columbus Publishing".[13]

In her book The Obesity Epidemic (2010), Harcombe made the following dietary claims, which were advertised in a credulous article in the Daily Mail:[15]

Harcombe is a cholesterol denialist and has argued against the use of statins. She promotes the unproven claims of Malcolm Kendrick.[16][17][18][19] She contributed to the THINCS book Fat and Cholesterol Don’t Cause Heart Attacks and Statins Are Not The Solution (2016).

Harcombe has criticized fruits and other high-fibre foods but actually admits to eating a lot of them. According to her website:

I eat fruit most days, but not too much and because I like it, not because I think it is good for me. I eat a lot of vegetables/salads – locally grown/in season wherever possible. I eat very dark chocolate pretty much every day and quite a lot of it! It's a great source of minerals and saturated fat ;-). I do eat starchy carbs – just not daily. I enjoy porridge (plain oats and whole milk) – especially in the winter. I like brown rice and (veggie) curries/chilli. Sometimes, there’s nothing like a crispy baked potato and melted cheese.[22]

This is despite the fact, she considers all fruit and vegetables as "pretty useless nutritionally" and "not the healthiest foods available".[1][23] She describes fruit as "unhelpful" and blames it on causing obesity.[24] She claims fibre has no requirement in a human diet and recommends her readers to stay away from high-fibre foods but eats fruit "most days" and enjoys brown rice and oats.[23][25]