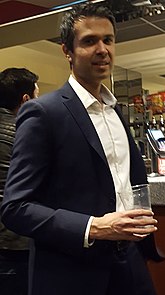 Aseem Malhotra (1977–) is a British consultant cardiologist, anti-sugar campaigner and cholesterol denialist. He promotes a low-carb high-fat fad diet known as the Pioppi diet.[1][2][3] The diet was listed by the British Dietetic Association as one of "Top 5 worst celeb diets to avoid in 2018".[4] Malhotra believes that sugary foods are a main cause of increased death rates from COVID-19.

Maholtra's views on diet and health have been criticised by the British Heart Foundation as "misleading and wrong" and his criticisms of statins have been described as dangerous to public health.[5] One critic noted that Malhotra's "interpretation of the Pioppi Diet does not reflect what the people of Pioppi eat. It is basically an ultra-low carb version of the Mediterranean diet with a few trendy ingredients, such as coconut oil, thrown in."[2]

Malhotra advises people to eat more saturated fat and recommends that obese people need not bother exercising.[6][7] Do You Believe That? In 2015, Malhotra co-authored a short editorial with Tim Noakes that claimed "physical activity does not promote weight loss", a dubious opinion that was unsupported by scientific evidence.[6] The poorly referenced editorial became a national news story.[6]

According to Anthony Warner:

Although Malhotra is largely associated with sugar shaming, his lack of understanding of science runs far deeper than that. For many years he has latched on to deluded conspiracy theorists everywhere, cosying up to Angry Chef's favourite Candida quack Zoe Harcombe, and even retweeting articles by the repugnant, anti-vax, bullshit-monger Dr Mercola, a man who claims to be able to cure autism with supplements, and has been repeatedly fined by the FDA in America for making unsubstantiated claims for the products he sells.[8]

In 2017, Malhotra and colleagues published an article which disputed the link between blood cholesterol levels and occurrence of heart disease. The authors also suggested that "stopping statins may paradoxically save more lives".[9] The article was criticised by the medical community. Cardiologist Tim Chico commented that "high cholesterol has been proven beyond all doubt to contribute to coronary artery disease and heart attack […] to say the cholesterol hypothesis is dead is simply incorrect."[10]

In 2017, Malhotra published an editorial with a controversial title "saturated fat does not clog the arteries".[11] Malhotra and colleagues suggested that "coronary artery disease is a chronic inflammatory disease and it can be reduced effectively by walking 22 min a day and eating real food."[11] This opinion was widely criticised by the medical community.[5][12] Honorary consultant cardiologist Amitava Banerjee commented that editorial was selective and "failed to cite a rigorous Cochrane systematic review which concluded that cutting down dietary saturated fat was associated with a 17% reduction in cardiovascular events including coronary heart disease on the basis of 15 randomised trials."[12]

Malhotra has criticised The Lancet, one of the world's oldest and best known medical journals.

The EAT–Lancet Commission, a 3-year project that brings together 37 experts from 16 countries led by The Lancet in 2019 released research on January 16 that argued dieting and food production will need to change in order to improve health and avoid damage to the planet.[13][14][15]

For health purposes their research suggested for people to cut down on the daily consumption of red meat.[16] Malhotra, noted saturated fat enthusiast, took offense to this and criticised the journal as "incompetent".[17] He also wrote to the present editor-in-chief of The Lancet on Twitter, "Can you please justify to medics, journalists and the public why we should continue to consider @TheLancet as a credible journal?"[18]

Malhotra, though willing to defend and downplay meat's negative health effects as well as really hating sugar, has criticized NHS staff (along with some other really set-off doctors) for indulging in doughnuts at Barnet Hospital which they received as a gift for their hard work in dealing with the 2019-20 COVID-19 outbreak.[19] In April 2020, Malhotra tweeted:

Absolutely disgraceful. Feeding junk food to already overweight and obese #NHS staff? I will forward this to CEO of @NHSEngland Simon Stevens personally and I can assure you he won’t be impressed especially as THESE foods a root cause of increased death rates from #COVID19[20]

Perhaps he can suggest these people to limit their doughnut intake to 7 grams per day?