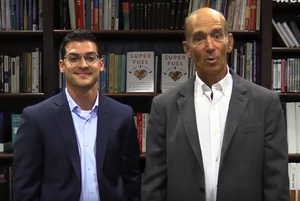 James DiNicolantonio is an American cardiovascular research scientist, conspiracy theorist, anti-sugar campaigner, anti-vegan and cholesterol denialist who is known for spreading misinformation about nutrition.[2] He is best known for his view that salt has been unfairly demonized by the medical community and that eating more of it will save lives. He also promotes the oxidized linoleic acid hypothesis of coronary heart disease which is contradicted by evidence-based medicine.

As well as recommending an increased consumption of salt, DiNicolantonio is a low-carb advocate and fan of the ketogenic diet.[3][4] In 2018, he co-authored, with alternative medicine guru Joseph Mercola, the food woo book Superfuel, published by Hay House.[4][5]

Similar to other low-carbers such as Gary Taubes, DiNicolantonio blames sugar for causing most chronic conditions.[7] His health advice is to eat more salt and less sugar. His views on salt consumption are in opposition to conventional medical advice. The American Heart Association recommends that people cut down on salt consumption because of the risk of high blood pressure, as "the science behind sodium reduction is clear. Significant evidence links excess sodium intake with high blood pressure, which increases the risk of heart attack, stroke and heart failure."[8] Health authorities who cite research from evidence-based medicine recommend that people eat no more than 6g (about a teaspoon) of salt each day.[9][10][11][12]

DiNicolantonio is certainly correct in pointing out that sodium is an essential nutrient for the body, and that there are health risks from salt under-consumption.[13] However, he takes the salt consumption thing to an irrational extreme, claiming that there is no link between salt consumption and the risk of high blood pressure. He claims, instead, that sugar is the real culprit.[7][14] His advice to eat more salt has been condemned by medical experts as potentially dangerous.[15] The claims in his book, The Salt Fix, were criticized by health authorities, including Public Health England (PHE).[15] DiNicolantonio recommends that people eat 7.5g to 15g of salt a day. He says that this is a "normal" salt intake.[15] Louis Levy, head of nutrition science at PHE, stated that "Diet is now the leading cause of ill health. By advocating a high-salt diet this book is putting the health of many at risk and it undermines internationally-recognised evidence that shows a diet high in salt is linked to high blood pressure, a known risk for heart disease."[15]

In the book, DiNicolantonio bizarrely claims that early humans during the Paleolithic era ate a high-salt diet, in reality the opposite is true as salt in the diet was very low.[16][17]

The book has been endorsed by various low-carb cranks including Marika Sboros and the Weston A. Price Foundation.[18][19]

DiNicolantonio is a cholesterol denialist who argues against the scientific consensus. He claims that high blood cholesterol levels do not increase the risk of cardiovascular disease.[20] He promotes a diet high in saturated fat and blames sugar and carbohydrates for causing high cholesterol and obesity.[20][21]

DiNicolantonio has been accused of misrepresenting scientific evidence on saturated fat and its relationship to cardiovascular disease.[20] His 2014 editorial for the journal Open Heart was criticized by Tom Sanders, Emeritus Professor of Nutrition and Dietetics:

This article rubbishes the relationship with saturated fat and CVD, misrepresents the scientific evidence and then goes on to put the blame on sugar. It is beyond reasonable doubt that elevated LDL (low density lipoprotein) cholesterol is a major determinant of risk factor for cardiovascular disease. The saturated fatty acids palmitic, myristic and lauric acids raise LDL cholesterol in increasing order in meta-analysis human experimental studies.[21]

Bruce Griffin, Professor of Nutritional Metabolism noted that "to suggest that the theory relating saturated fat to increased total cholesterol is flawed, is nonsense, and contradicts 50 years of evidence-based medicine."[20]

DiNicolantonio promotes the "oxidized linoleic acid hypothesis" of coronary heart disease (CHD) in opposition to the well supported low-density lipoprotein (LDL) oxidation theory. He wrote about this hypothesis in a paper in 2018.[22] According to DiNicolantonio it is the linoleic acid

(n-6 polyunsaturated fatty acid) in omega-6 vegetable oils and other foods that are to blame for causing coronary heart disease and many other diseases. According to his hypothesis "Dietary linoleic acid, especially when consumed from refined omega-6 vegetable oils, gets incorporated into all blood lipoproteins (such as LDL, VLDL and HDL) increasing the susceptibility of all lipoproteins to oxidise and hence increases cardiovascular risk".[22] As of 2022, there is no data from evidence-based medicine to support his hypothesis, but plenty of data to contradict it.

In contrast to what DiNicolantonio's claims, linoleic acid (a polyunsaturated fat found in most nuts, seeds and vegetable oils) lowers risk of coronary heart disease.[30] Linoleic acid is the major PUFA present in most types of nuts (40–60% of total fatty acid composition for Brazil nuts, pecans, peanuts and walnuts).[31] Higher intake of these nuts has been shown to the lower risk of all-cause mortality, cancer, CHD mortality, inflammation and total CHD.[32][33] This data contradicts DiNicolantonio hypothesis.

In his paper, DiNicolantonio says that "An excess dietary intake of linoleic acid causes greater endothelial activation compared with an excess of saturated fat" but fails to back this up with any scientific evidence apart from an outdated study on rats. He also says "Linoleic acid is inflammatory to the vascular endothelium" but fails to support this claim with any data from clinical trials.[22] Contrary to what DiNicolantonio says there is no reliable data to suggest that adding linoleic acid to the diet increases concentration of inflammatory markers.[39] There is evidence indicating that linoleic acid is anti-inflammatory such as higher levels of linoleic acid lowering risk of rheumatoid arthritis.[40][41]

DiNicolantonio's fanatical claim that "numerous lines of evidence show that the omega-6 polyunsaturated fat linoleic acid promotes oxidative stress, oxidised LDL, chronic low-grade inflammation and atherosclerosis, and is likely a major dietary culprit for causing CHD"[22], is clearly unsupported by scientific evidence. Many of DiNicolantonio's references in his paper are out-dated studies on rats. Unfortunately his paper was picked up by 16 news outlets and promoted by cranks from the low-carb community on social media platforms.

DiNicolantonio promotes irrational conspiracy theories on his Instagram and Twitter profiles claiming "big pharma" and the medical community lie about everything and try to control people: