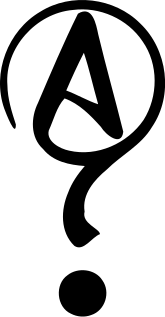 Agnosticism in contemporary theology is the position that the existence and nature of a god or gods are unknown or unknowable. Agnostics are sometimes looked upon as wishy-washy fence sitters by both atheists and theists; however, most agnostics feel that it's intellectually indefensible to make a strong assertion one way or another. There is a frequent conflation between the idea of atheism ("I do not believe there is evidence for God") and agnosticism ("I don't know if there is a God") because the former is an expression of belief and the latter is an expression of knowledge.

The term was coined by English biologist T.H. Huxley in 1869, although the concept was expressed far earlier than that, going back to the Greeks around 450 BCE and even earlier mentions in the Hindu Vedas, written between 1700 and 1100 BCE. In modern times, the word agnosticism is used exclusively. Initially, agnosticism had been intended as a philosophical position that the epistemological question of whether a god exists is malformed and thus that a position on the question is impossible, making the terms theism and atheism obsolete. It has more modernly been used to mean someone who doesn't know, or doesn't think the existence of a god is knowable.

Huxley was a scientist, above all else. He described agnosticism as a form of demarcation. It wasn't that we couldn't know, for certain; it was that we couldn't even begin to know, without evidence. His agnosticism was not compatible with forming a belief as to the existence, or non-existence, of gods. It was a total suspension of judgement.

"Agnosticism is of the essence of science, whether ancient or modern. It simply means that a man shall not say he knows or believes that which he has no scientific grounds for professing to know or believe."[2]

Huxley also clearly stated that his form of agnosticism did not amount to "unknowable".

"The extent of the region of the uncertain, the number of the problems the investigation of which ends in a verdict of not proven, will vary according to the knowledge and the intellectual habits of the individual Agnostic. I do not very much care to speak of anything as "unknowable." What I am sure about is that there are many topics about which I know nothing; and which, so far as I can see, are out of reach of my faculties. But whether these things are knowable by any one else is exactly one of those matters which is beyond my knowledge, though I may have a tolerably strong opinion as to the probabilities of the case. Relatively to myself, I am quite sure that the region of uncertainty–the nebulous country in which words play the part of realities –is far more extensive than I could wish."[3]

In theory, agnosticism is compatible with all but the most dogmatic of religious faiths, but in practice most agnostics are perceived as godless. Agnostics believe that while there is insufficient evidence to prove that there is a god, believing that there is not a god also requires a leap of faith (similar to any religious conviction) that lacks sufficient evidence. Simply put, agnosticism merely asserts that we lack the knowledge to determine whether or not God exists — in a sense, it differs from more explicit atheism by being a position based on a lack of knowledge, rather than a lack of belief. True agnostics would actually not fit on a hypothetical scale between theism and atheism as they would say the argument is unanswerable and could result in anything, almost like Schrödinger's cat but where the box can never be opened.

Most agnostics, however, can additionally be categorised depending on how their beliefs work out in practice, whether they're more atheistic or theistic. Agnostics may live and act as if there is no God and that no religion is correct, but shy away from the title "atheist" because of the expression of certainty implied. On the other hand, someone may consider themselves spiritual but not religious, or perhaps even nominally follow a religion, but identify as an agnostic in order to convey an honest doubt about the reality of it all.

Agnostic atheism holds that insufficient evidence exists to prove a god but also that logic is insufficient in overcoming the unknowability of the existence of a god. Agnostic atheists lean towards atheism as a sound null hypothesis, particularly in practice, but acknowledge that they could be wrong. The difference between atheism and agnostic atheism is subtle and may not always be discernible, though agnostic atheists are generally more tolerant of the religious than more convinced atheists.

An agnostic atheist has two qualities: they don't happen to believe in any gods and they don't claim to know or be sure that no gods can or do exist. Not believing that some claim is true while also not claiming to know for sure that it's false is not only easy, it happens in lots and lots of different topics. It would be a surprise if it didn't happen when the topic is the existence of gods.

For some strange reason, though, many people have the mistaken impression that agnosticism and atheism are mutually exclusive. But why? There's nothing about "I don't know" which excludes "I don't believe." On the contrary, not only are they compatible but they frequently appear together because not knowing is frequently a reason for not believing. It's often a very good idea to not accept some proposition is true unless you have enough evidence that would qualify as knowledge.[3]

There is also agnostic theism, which maintains a belief in god, but acknowledges uncertainty regarding the characteristics of that god. Some theist agnostics are also Deist, believing that God created the universe but is irrelevant to the workings of it (essentially, they assert that we may or may not know whether God exists but it matters not anyway because of God's role to play, or lack thereof, in universal affairs). Believing agnostics often identify themselves as fideists, a term coined by Martin Gardner (a deist himself) for people who choose to believe in God because it comforts them and not for intellectual reasons.

The agnostic theist may also or alternatively be agnostic regarding the properties of the god or gods that they believe in.

This variety of agnosticism is a form of pluralism.

Like pretty much every other philosophical definition ever invented, agnosticism has also been split into so-called "weak" and "strong" positions.

Going by several titles, including "strong", "hard", "closed" and "permanent", strong agnosticism states that there is no way to answer the question "does God exist?" and further than that, there never will be. This is rooted in the fact that an omnipotent being, if it/he/she exists, would not be subservient to the principles of logic, and therefore that confirming God's existence or nonexistence is fundamentally impossible, irrespective of the methods used.

That strong agnosticism also goes by the name "permanent" should be a clue as to what the weak form is; that is, in principle, the question of God's existence is solvable and evidence can be sought. While this isn't synonymous with God's existence definitely being knowable, it leaves an open mind as to whether we could figure it out. This is almost like being agnostic about being agnostic.

Note: All the following comments should ideally be read after reading our straw man article: