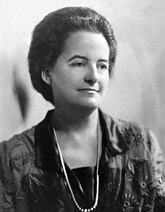 Alice Bailey (1880–1949) was the writer of a series of books on esoteric occult subjects, heavily influenced by Theosophy, reincarnation, and astrology as well as Christianity and a heavy smattering of pseudoscience.

While her books are typical hard-to-understand muddle like most in that field, she is claimed by some to be a major influence on today's New Age beliefs, although she is not widely read in those circles.

Bailey's books claim that there is a benevolent spiritual hierarchy of ascended masters overseeing events on Earth and guiding humanity into higher levels of existence. Her writings contain an early example (in 1940) of the term New World Order to refer to a social democratic government she believed this spiritual hierarchy would guide humanity after World War II. She believed this hierarchy would eventually reveal themselves to mankind and "The Christ" would return to Earth, this time in the form of Maitreya (a figure from Buddhism) rather than Jesus.

Alice Bailey's writings have been accused of anti-Semitism because of her strong opposition to Zionism and her belief that Orthodox Judaism would have to end through the intermarriage of Jews with other people before The Christ would return.

This new Age-related article is a stub.
You can help RationalWiki by expanding it.
Retrieved from "https://rationalwiki.org/w/index.php?title=Alice_Bailey&oldid=2431512"
Categories:
Hidden categories: