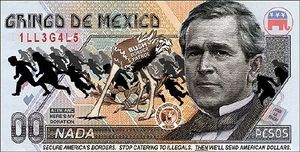 The People's Republic of China holds $1 trillion, which must be redeemed in these. The illegals want you to.

The Amero is the hypothetical[note 1] currency of the hypothetical[note 2] North American Union. Its name, though extremely dumb in every other way, is ingenious in that it both references the Euro and plays into anti-Mexican paranoia with its vague Spanish-soundingness. Nobody can ever reasonably explain why a common North American currency wouldn't just be called the "dollar," at least in English, (since the US and Canada both use dollars, and there's nothing keeping a currency from being called different things in different languages) so long as the sign/symbol remains the same (which, since both the dollar and Mexican peso use the "$" symbol, shouldn't be too hard).

The name "Amero" appears to have been coined in a serious but speculative 1999 paper written by Herbert Grubel, an economist for the Fraser Institute, a Canadian libertarian think tank, discussing why he thought such a monetary union would be a good idea.[1]

Nationalist Conspiracy theorists contended that the governments of the United States, Canada, and Mexico are already taking steps to implement such a currency, as part of a "North American Union (NAU)."[2] This has even reached the point where rumors and conspiracies were being made up that stated that the coins were already being made. No current members of any country's government have officially stated a desire to create such a body,[note 3] nor has anyone introduced a common currency as part of this concept. On the other hand, someone has begun making the coins... and they have about as much worth as the coins you see sold on TV.

Conspiracy-monger and racist web-radio host Hal Turner has promoted the concept that there were actual Amero coins and bills ready for circulation when the North American Union started. He even posted images of what he claimed were the actual currency.[3] The "coins" were nothing more than fantasy medallions designed and minted by artist Daniel Carr,[note 4] and the "bills" were political commentary artworks created by someone on Flickr named "aleatorysort."[4]