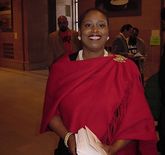 Cynthia McKinney (1955–) is a conspiracy theorist and former member of the U.S. Congress from Georgia. She was the presidential nominee of the US Green Party in the 2008 U.S. Presidential Elections. She is currently on the faculty of North South University in Bangladesh where she teaches management and political science courses.[2]

She was first elected in 1992 but lost her seat ten years later. Critics charged that her undoing came from claiming Bush knew 9/11 would happen but did nothing and getting documents released about the murder of rapper Tupac Shakur. She got her seat back in 2004 but lost it again when she slugged a Capitol Hill officer

who attempted to stop her from going into a restricted area of the Capitol because she was not wearing her ID pin and the officer did not recognize her.[3] She blamed the officer, because apparently, all officers should be able to identify all 535 members of Congress on sight, even though over three-quarters of them change every 2 years (all 435 House seats and a third of the Senate seats). She lost her last Congressional election when she and her father began slinging antisemitism around, though this was nothing new for McKinney Sr.[4] It definitely did not endear her to many.

Had she been elected president in 2008, she would have been the first African American woman, the first woman, and the first Green Party politician to become president of the United States; but with endorsements from the likes of Roseanne Barr and Ward Churchill, who needs a Vast Right-Wing Conspiracy™ to sink one's candidacy? After a last (failed) run for congress in 2012, she faded from relevance.

McKinney has a profound anti-war stance, generally opposing brutal dictators. However, she supported the rule of Gaddafi in Libya, including his persecution of the Nafusi Amazigh.[5]

She was outspoken in her support for the victims of Hurricane Katrina.

McKinney is known for supporting a wide range of conspiracy theories. She holds truther views, and expressed these views for the Congressional record on the House of Representatives' floor.

A fellow conspiracy enthusiast, Greg Palast, reported in June of 2003 that none of the media outlets making this claim offered a proper citation of McKinney's alleged statement in the Congressional record. This, he said, caused him to search that record and fail to turn up the quote.[6]

Palast further claimed that McKinney actually made the following statement for the Congressional record: "George Bush had no prior knowledge of the plan to attack the World Trade Center on September 11." Unfortunately, Palast neglected to provide a proper citation of this claim, making it extremely difficult to verify without extensive trawling through the Congressional record.

McKinney signed on to a 9/11 Truth Movement demand for more answers about 9/11.[7] A year after that, she held a Congressional hearing on the subject.[8] Charged that she was promoting trutherism, she responded with a letter that essentially says she was just asking questions.[9]

McKinney has also expressed support for many other conspiracy theories, including:

Government conspiracies
McKinney supported the disclosure of documents regarding the assassination of Martin Luther King[10] because she believes that his assassination was some sort of secret government plot to prevent the "black messiah". Not surprisingly, she believes that the Kennedy assassinations are also part of a conspiracy. Interestingly, documents released under a FOIA request by the FBI indicate that the FBI was at least interested in the possibility of coercing Martin Luther King Jr. into committing suicide.[11][12][13][14][15]
Hurricane Katrina
McKinney believes that the U.S. military shot and killed 5,000 prisoners during Hurricane Katrina and dumped their bodies in the bayou,[16] and that the city of New Orleans executed thousands of people in the aftermath of Katrina.[17]