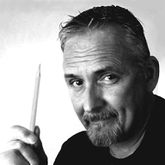 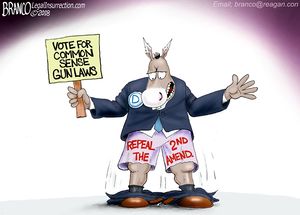 Branco claims that Democrats want to repeal the Second Amendment:[3]

It has been revealed over the past week that the Democrat party is officially the party of repealing the 2nd Amendment. Political Cartoon by A.F. Branco

This comic is a response to the push for "common sense" gun laws by Democrats that ban highly dangerous guns.[4] The comic illustrates the common confusion that the Second Amendment is exclusively about guns, when it's actually about arms. In other words, the Second Amendment has already been violated because citizens' rights to explosives and such are already restricted; explosives are arms

by definition. However, Branco has not shown any sort of outcry over this. Also, Branco takes it to the extreme by insinuating that Democrats secretly want to repeal the Second Amendment.[note 1] 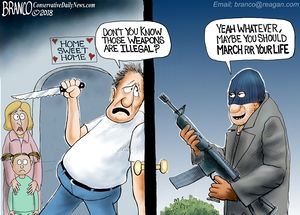 "March For Our Lives" doesn't seem to care about all the lives saved by people owning Guns. It doesn't fit their repeal the 2nd Amendment agenda.

March For Our Lives

advocates for tighter gun control and doesn't advocate for a 2nd Amendment repeal. Branco is putting words into their mouths and is applying the slippery slope fallacy. Also, Branco is overestimating how many lives are saved from gun self-defense; the number is less than 1%.

This united States politics-related article is a stub.
You can help RationalWiki by expanding it.
Retrieved from "https://rationalwiki.org/w/index.php?title=Antonio_F._Branco&oldid=2452407"
Categories:
Hidden category: