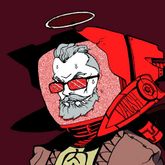 Vaush /ˈvɑːʃ/ (or VaushV) is an American self-described socialist[1] YouTuber and occasional troll[2] who advocates for "pro-markets" libertarian socialism to replace capitalism as an economic system in the near future. He's gained a modest amount of fame online for his videos criticizing and debating reactionaries such as Sargon of Akkad, Blaire White, Stefan Molyneux, Count Dankula, and Jesse Lee Peterson, but also for controversial sexual harassment incidents under his previous moniker.[3] Before making his own channel, he went by IrishLaddie and was predominantly known for his appearances on Destiny’s streams. He is far edgier than the majority of BreadTubers, which is something that gained him considerable controversy, like when he joked about genociding transgender people ("The Trans Question", which is a reference to the Jewish Question and how it led to the mass extermination of Jews in Europe).[4] In May of 2021, Vaush held a charity live stream which raised over $250,000 for the Palestine Children's Relief Fund.[5][6]

His YouTube channel has over 126 million views and over 350,000 subscribers.

Vaush has debated fascists, neo-Nazis, social democrats, Stalinists, conservatives, right-wing libertarians, and neoliberals. His debating style could be considered a more aggressive version of Destiny's conservative arc debates. While he occasionally does rather poorly (his first debate with Sargon wasn't his most impressive moment), he is arguably the best person at debating extreme right-wingers at the moment (exemplified through his second debate with Sargon and his debate with Stefan Molyneux). Here's a list of the most prominent people he has debated:

Vaush has also made appearances on the Drunken Peasants Podcast, where he has debated Vee,[32] Ethan Ralph,[33] and Doug TenNapel.[34]

In March 2019, several direct messages were leaked in which Vaush (previously known as IrishLaddie) was acting creepily towards members of Destiny's Discord server, such as sending sexually explicit pictures to people after they asked him not to.[35] Before logs being leaked of the event, and discussed by Destiny,[36] he considered confronting one of the victims as shown in a photo of his discord.[37] And his accusers claim that he considered doxxing them.[citation needed] In response to the leaked image of the former, Vaush has claimed that the reason he considered it was because he had reason to believe they were going to spread false information about him. He adds that he changed his mind in the same conversation, after his discord expressed a negative reaction to his plan.[38] After this drama occurred, Vaush and his admins/mods White Nervosa and Rodriguez commented that he was trying to dissociate from his old moniker IrishLaddie in favor of VaushVidya, which he had already been using for some time, in order to deflect some backlash.[39] Since the event, Vaush has released all the logs from the event, apologised extensively for his behaviour, and has promised to do better in the future.[citation needed]

In June 2019, Vaush received pushback among several Twitter users,[citation needed] ranging from some of his own fanbase to the compilation account HotCisTakes, for posting a tweet that starts with “Honestly fuck trans people” that many interpreted to be dismissive of trans people offended by misgendering. Vaush insisted it was a joke intended to mock transphobes and that he meant no ill will towards trans people (his YouTube content is remarkably pro-trans, especially by the standards of the site, and he has supported trans content creators ranging from ContraPoints to Comrade Cora).[40] Many rejected this characterization, citing that the tweet sounded far too similar to something actual transphobes would say to justify committing violence against trans people, almost as if he was making light of such a serious issue as transphobia.[citation needed]

This was further compounded with video resurfacing in December 2019 where he went on a rant against leftists on Twitter that some people called queer- and transphobic. In looking back on the video, he defended everything about his remarks except the idea that these are reactionary statements.[41]

More video would surface in 2020 of a 4 hour stream featuring numerous rants against "wokescolds" and trans people.[42]

However, Vaush has repeatedly defended transgender people and debated and debunked transphobes on several occasions.[43]

Vaush sometimes uses slurs for irony value and shock provocation, supposedly to break the stereotype of BreadTube as a bunch of "easily triggered SJWs", a characterization usually only adopted by the far-right, and also as a way to attract and potentially de-radicalize far-righters. He has also said the n-word on his stream.[44] This has been done in the context of the Killstream (the specific timestamp is 1:33:20), where he was debating multiple neo-Nazis who, after having already said several unfiltered homophobic slurs, jumped around saying the phrase “The N-word”, to which he then boldly responds by asking “Dude, you can just say 'niggers'.” to prove that he wasn’t afraid of their kind of speech. Inevitably, this caught them off guard and silenced them promptly; he has gone on to say that while he believes use of the word is harmful and inadvisable and he will not use it again, he stands by his use of it in this context. Later, in a newer video, he has said that he no longer stands by the use of the word in that context.[45]

Accusations of support for pedophilia

Vaush has been accused of supporting the usage of child pornography, particularly through a viral clipped segment from an early 2019 Dead Cells stream.[46] In reality, he is openly against it and had compared the production of child pornography to production of goods involving child slavery (e.g. coltan/lithium in smartphones, mica in beauty products) as both involve the exploitation of children.[47][48]

Context aside, and despite his insistence at the time, it is still really not a good look (by framing it initially as not having heard any convincing moral/legal arguments as to why the possession of CP should be illegal, the differences between labor exploitation and sexual exploitation, etc.). He has since admitted he "phrased [his] arguments terribly in that... discussion."[49]

He has also argued that in a stateless and classless anarchist society the age of consent should be lowered to 15 or 16 as he viewed some of the power imbalances older people have over younger people to be adressed in such a society.[50] He claimed in September 2020 to have reversed his previous position on this and now advocates to increase it instead.[51]

NonCompete, the guest Vaush was debating with, had argued that the Nazis were not justified in believing that Jews controlled banks "because Jews don't actually control banks in the world", to which Vaush replied "there are a disproportionate amount of Jewish control of banks in Germany during the Weimar Republic". NonCompete promptly left the debate and the accusations of antisemitism began. The point that Vaush was attempting to illustrate was that it doesn't matter whether bankers are Jewish or not.