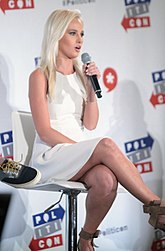 Tomi Lahren being American-exceptionalist in 2016.

Tomi Rae Augustus Lahren (born August 11, 1992) is a "snowflake melter"[2] and wingnut political pundit who formerly had a show on One America News Network and The Blaze. Lahren is, in most ways, just a typically very obnoxious right-wing radio host. Imagine a more clueless Rush Limbaugh who looks like a female FOX News anchor (which, as of August 2017, she actually is now.)

Tomi Lahren seems to get upset when black people speak up about issues which affect them, actually christening the Black Lives Matter "More"[3] movement as the new KKK.[4] In February 2016 Lahren lost her shit when Beyoncé had a Black Panthers-inspired Super Bowl halftime performance, infuriated about the group's using violent and intimidating means to achieve not racial equality but the evil goal of overthrowing "white domination" instead of using peaceful measures to cause change.[3] However when black people do protest peacefully Lahren is quick to scold them for their actions. When actor Jesse Williams' acceptance speech at the BET awards featured his views on black oppression in American society, she accused him of perpetuating black victimhood.[5] When quarterback Colin Kaepernick decided to make a stand by sitting from now on whenever the national anthem is played before NFL games, peacefully protesting racial injustice in the US, Lahren urged him to leave the country when his supposedly ungrateful half-white existence hates white people so much. However, in the latter case, Kaepernick didn't mention white people once when he explained his reasons for the protest.[6]

Tomi Lahren offers her own solutions to get African-Americans out of their ostensibly self-imposed misery. Namely, black men should stick around to raise their children[7] and stop selling crack cocaine for over a decade to protect black neighborhoods.[8]

Lahren has often identified as pro-choice, despite referring to abortion as "murder" in the past. She made this stance a tiny bit clearer in a March 2017 interview on The View.

Her little moment of awesome would end up costing her, as The Blaze suspended her show the following Monday.[10]

Lahren is a firm supporter of the Second Amendment. After the Las Vegas shooting in late 2017, she wrote off big names in the media seeking gun control to prevent further massacres as liberals and elitists sneering at lawful gun owners who would use the attack as an excuse to push their agenda. She claimed the average citizen needs firearms for protection as opposed to the powerful who would have bodyguards and paid protection. All the while, she didn't miss a chance to ignore the legitimate concerns of gun control and smear anyone else seeking change as Democrats looking to erode American rights, to say nothing of how she, as a well-off white woman, is exactly one of those who would not need guns. For someone who accused celebrities like Colbert and Kimmel of trying to control the conversation, she co-opted the voice of the little people she is supposedly on the side of and certainly had more than an agenda to push even in the wake of the tragedy, instead of actually providing any condolences or countermeasures to be taken.[11]

Not content to rest on her laurels, she would later parrot the same nonsense on Twitter after the Parkland school shooting in February of 2018, this time claiming the shooting had nothing to do with guns and everything to do with mental illness, in addition to the same smears of the Left as using a tragedy simply to push their way forward.[12] Things would go south for her this time, as the teens who survived the massacre immediately took her to task on their own Twitter accounts and said this issue was absolutely related to guns, telling stories of how powerless they were in the wake of the incident, amongst other well deserved colorful remarks for her thoughtlessness.[13] Proving once and for all what a classy blonde she really is, she doubled down on her comments, not even bothering to apologize to the students who had directly messaged her and instead shat out another load of santorum, this time about how unfair it is to blame the gun when used in a school shooting as opposed to how people don't blame guns when cops shoot innocent people.[14] The Left doesn't respect the dead, huh?

A different shade of wingnuttery[edit]

Lahren could also be considered representative of the slight departure from religious fundamentalism that informed the older American far-right and instead follows a broadly ultranationalistic, nativist line of thought that would be more fitting for, say, the Front National than for a fundamentalist church. But before getting a wrong impression of her she still parrots climate change denialism,[15] believing drilling and fracking should be done to get independent from Middle Eastern oil (because screw the evidence and your "hippie friends"),[16] and unsurprisingly supported Donald Trump for president in 2016. Lahren also says Barack Obama is "being friendly to the jihadi mentality” (did she miss that it was him who took down Bin Laden?) while also saying that Obama should bomb them which would apparently be a new strategy.[17] That the Obama administration did exactly that did not appear to cross her mind, but such is the way of these things. Lahren's delivery makes Rush Limbaugh's seem calm and laid back in comparison. Lahren often delivers fast-paced rants where she's yelling the whole time, overuses the word "snowflake" (even by wingnut standards), and while the expression "foaming at the mouth" is typically meant figuratively, Lahren does it literally, as she seems to have an aversion to swallowing her spit - by the end of every video she's severely foaming out the sides of her mouth, lisping and/or gurgling her words, and looking like a strange combination of pitiable and scary. This is more like the persona of YouTube "skeptics" turned up to 11 than anything older conservatives would be familiar with.

Being granted bare minimum credit, she at least has called the alt-right movement "disgusting" and said she would never be "an advocate, a cheerleader or an apologist for the KKK or any other hate group.”[18][19] Furthermore, she also denounced Roseanne's racist Twitter comments.[20]