From RationalWiki
Jump to navigation Jump to search
Greenland 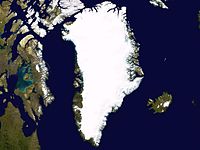 Greenland is geographically part of North America, but culturally more associated with Europe, specifically Scandinavia or just the Nordic countries in general, and is a quasi-independent territory of Denmark.[note 1] Greenland has a lot of ice and is not particularly green, while Iceland does not have as much ice. In defense, Iceland isn't that green either. Nobody is quite sure how it got its name, although this may have something to do with Viking raiders who were all stoned out of their minds on cheap mead and hallucinogenic mushrooms who thought all that snow and ice glowed a really trippy green under the dancing northern lights. Far out, man.

An alternate explanation is that when Erik the Red[note 2] made landfall in Greenland, he was desperate for people to settle down there, and so gave it its inviting name, thereby launching history's first real estate scam. Although that region was warmer then than it is now, life still proved to be harsh, keeping cattle and sheep penned 5 months of the year.

However, this didn't stop hardcore climate change denialists from claiming the word 'green' in Greenland proves climate science is a hoax. One wonders what does the country Turkey prove? The unfortunate Thanksgiving dinner table guest came from there? Moral of the story? Denialists clutch at straws.

The Vikings left, though, as there wasn't much there to loot and pillage, so they moved on to Minnesota and started a football team.

It mostly has Inuits and polar bears, and a lot of ice (not for long!). No penguins, though.[note 3]

If you believe Princess Bride, it's a very bad place to be unemployed.

Officially it is part of Denmark, who granted it "home rule" in 1979. Unofficially, Greenland is rumored to still be teeming with big burly Vikings who plan on using it as a base to launch raids on Canada, New York, and other lesser countries.

Because of its location near the North Pole it is of some strategic importance, particularly for Americans worried about an attack over the Arctic from Russia. The United States has a major facility at Thule Air Base

, which includes a Ballistic Missile Early Warning System to track incoming nukes. Also, in 2019 Donald Trump attempted to buy all of Greenland from the Danish government for its military value or because it was a slow news day or golf or something.[1]

Today, Greenland (or Kalaalit Nunaat as the locals call it) is in the process of attaining independence from Denmark; a 2008 referendum took control of Greenland's police, coast guard, and courts away from Denmark and placed them in the hands of the Greenlandic people.

Greenland is probably the only place in the world where you can walk into a Chinese restaurant and order whale meat. It's also a real fucker on any of the numerous plague simulator games.