From RationalWiki
(Redirected from Asimov)
Jump to navigation Jump to search 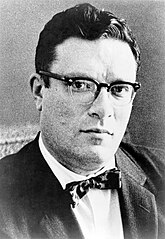 Isaac Asimov (1920–1992) is credited as one of the greatest science fiction writers of all time, considered to be one of the "big three" of science fiction, along with Arthur C. Clarke and Robert A. Heinlein. Unlike most SF writers, he had genuine scientific credentials and also produced a lot of popular science books. He was an extremely prolific writer with broad interests - he published over 200 books, covering every section of the Dewey Decimal System except philosophy.[1] The main character from the video game Dead Space named Isaac Clarke is named in honor of Isaac Asimov and Arthur C. Clarke.[2]

Originally, Asimov started in the field of biochemistry, earning a PhD in the subject in 1948 and taking a teaching position at Boston University's School of Medicine until he turned to writing full-time in 1958. He is most famed for his writing on robotics,[3] but during the 1960s he shifted his focus almost entirely to writing popular science, inspired by the public's new-found interest in science following the launch of Sputnik 1[4] in 1957. The high quality and diversity of his pop-science work earned him the title of the "Great Explainer" and once prompted Kurt Vonnegut to ask him "how does it feel to know everything?" He considered himself a rationalist, humanist, and skeptic[5] and also did some work in refuting superstition and pseudoscience.

In 2013, the FBI released files showing that, starting in 1965, they investigated Asimov (who had emigrated from Soviet Russia in 1923 at the age of 3) as being a possible Soviet agent.[6] Shows what they know!

Furthermore, in his own autobiography he allowed Judith Merell, a fellow contemporary science fiction writer, to write a footnote in which she claimed: "The fact is that Isaac (who was at that time [1952] a spectacularly uxorious and virtuous husband) apparently felt obliged to leer, ogle, pat, and proposition as an act of sociability. When it went, occasionally, beyond purely social enjoyability, there seemed no way to clue him in. … Asimov was known in those days, to various women, as "the man with a hundred hands."[8]

Science fiction writer Alec Nevala-Lee would eventually point to Asimov's presence as a major factor in the reason that the early science-fiction community was overwhelmingly male-dominated, citing a number of science fiction writers who were active at the same time as Asimov who provided accounts of Asimov kissing, hugging and groping women at conventions.[7]

By 1987 however, Asimov seems to have realized that his behavior around women was regarded as creepy, writing in an obituary for his fellow scifi writer Alfred Bester

: "A more indirect discomfiture and a much worse one was my realization that just as I approached Alfie very warily when I saw him before he saw me, it might be possible that young women approached me just as warily, for I will not deny to you that I have long acted on the supposition that hugging, kissing, and goosing was a male prerogative, provided young women (not aging males) were the target. You have no idea how it spoiled things to me when I couldn't manage to forget that the young women might be edging away."[9]

In some of the later books, these rules apparently logically lead to "zeroth" law: "A robot may not harm Humanity or, through inaction, allow Humanity to come to harm." The I Robot series of short stories plays with these "rules", and endlessly exploits their weak links. For instance, what would happen to the laws if a human ordered a robot to kill someone, but threatened to kill themselves if the robot did not obey? Clearly, someone's head is going to explode at some point. When contradictions such as this arise, the robot is in danger of 'brain' damage, for which it may take years of 'robopsychology' to repair, if repair is even possible.[note 1] The first book does suffer heavily from a groundbreaker effect of sorts, in that while incredibly groundbreaking when it was first written, it's been copied and improved upon so much since that the original is now relatively boring. There are some good parts that we could definitely appreciate, such as a robotic religion complete with robotic supremacy,[note 2] but don't get into the book with exceptionally high expectations.

Another issue is that information needs to be available or the laws become meaningless. Discussed in his novel The Naked Sun was the potential for a robot aircraft to think that all other aircraft were robotic and thus the robot would be able to destroy aircraft full of civilians with ease. A robot could be ordered to poison some tea that no one was drinking, while a second robot could then be ordered to serve the tea if it didn't know about the first's actions.

In the film "Bicentennial Man", starring Robin Williams, a robot agrees to terminate the life of a human by unplugging her breathing machine. This supposedly does not violate the first law because the robot was relieving the human of her suffering. Unfortunately, a robot like this would decide to exterminate humanity if he came to accept the idea that "life is suffering", a doctrine promoted by religions such as Buddhism. Given that in his short stories robots have both developed religion and become the leaders of humanity, such a scenario is not so far-fetched. In fact, in one novel, a robot allowed Earth to become radioactive in order to force the humans to colonize space.

The 2004 film version of I, Robot resembles the book in the following particulars:

Asimov made many quotable statements but one relevant to RationalWiki's proclaimed purpose is:

Another we highly approve of is:

Another quote from Asimov, a motto of a character in The Foundation, is often misunderstood:

This quote does not in fact refer to pacifism, but is an observation that open warfare is extremely wasteful and a leader who fails to avoid it is practically by definition incompetent. Instead, the Foundation defends itself through espionage, sabotage, religious dominance and other indirect means.

More quotes can be found here.

The Sirius Mystery is a book by Robert Temple, which claims that the Dogon people were visited in the past by extraterrestrials from Sirius. What does this have to do with Asimov, you ask? Temple sent the book to Asimov to ask for his opinion, and Asimov remarked, "I couldn't find any mistakes in this book. That in itself is extraordinary", a statement which was then made part of the advertising blurb for the book.[11] But Asimov did not actually support the book, saying, "Robert Temple on three different occasions, by mail and phone, attempted to get support from me and I steadfastly refused."[11] He also wrote: