The atheist bus campaign is a project in the United Kingdom to put atheist slogans on buses.[1] It is backed by the British Humanist Association. The main campaign ran in 2008 and 2009. Its style has been copied and expanded upon to produce other slogans and campaigns aimed at raising awareness of atheism —and that it's okay to not believe.

The campaign started when journalist and blogger Ariane Sherine saw an advertisement on a bus claiming that salvation only came from Jesus. She almost immediately wrote an article about it in The Guardian, wondering why people could get away with advertising religious messages without any evidence, while if someone was to proclaim that "a lion is loose in London" without evidence it would be frowned upon greatly.[2] After an initial attempt to start an "atheist campaign" in July 2008 fell slightly flat, she restarted it via a Facebook group and quickly received thousands of pounds in donations.[3]

The campaign ran in late 2008 and early 2009, with billboards and buses showing the slogan and it taking off across the internet. It attracted criticism primarily from Christian pressure groups such as Christian Voice, led by Stephen Green, previously best known as the man who attempted to ban Jerry Springer: The Opera on grounds of blasphemy. As if to prove that the American religious nuts didn't hold a monopoly on intolerance and hatred of people who don't hold similar beliefs, Green was quoted as saying "Bendy-buses, like atheism, are a danger to the public at large".[4]

There have been press reports that some atheists wanted a stronger or more explicit message, or that the word "probably" was only used to keep the advertising standards people happy. However, when talking about the slogan the organiser, Ariane Sherine, strongly defended it saying:[5]

There’s another reason I’m keen on the “probably”: it means the slogan is more accurate, as even though there’s no scientific evidence at all for God’s existence, it’s also impossible to prove that God doesn’t exist (or that anything doesn’t). As Richard Dawkins states in The God Delusion, saying “there’s no God” is taking a “faith” position. He writes: “Atheists do not have faith; and reason alone could not propel one to total conviction that anything definitely does not exist”. His choice of words in the book is “almost certainly”; but while this is closer to what most atheists believe, “probably” is shorter and catchier, which is helpful for advertising. I also think the word is more lighthearted, and somehow makes the message more positive.

It is interesting that both the world's most prominent atheist campaign, and the world's "most famous atheist", concur that the reason for being an atheist is the lack of evidence for any gods' existence, and that neither make the categorical, faith-based statement that God does not exist.[6] 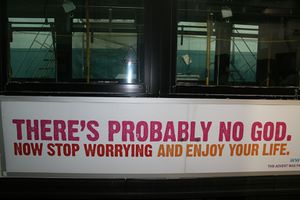 As so much money was raised by the initial campaign it was expanded to the London tube system, with four new advertisements, starting on January 12, 2009. These featured quotes from famous atheists, along with the main slogan, and a link to the BHA website.[7]

The Atheist's Guide to Christmas[edit]

Following on from the bus campaign, Ariane Sherine edited a book, The Atheist's Guide to Christmas featuring contributions from a wide variety of (mostly British) authors, from scientists to comedians. Richard Dawkins, Derren Brown and Ben Goldacre are among the 42 (perhaps as homage to Douglas Adams) contributors, each writing about their experiences and what is relevant to their field (Brian Cox writes about the LHC) and sometimes something completely different - Dawkins, for example, tries his hand at something of a comedy sketch. The fees of the authors and editors, roughly 50% of the total profit, from the book are donated to the HIV charity, the Terrence Higgins Trust - there were numerous other charities approached by Ariane Sherine, but the THT was the only one that would accept donations from an atheist initiative.[10] As far as anyone can tell, the book is the only explicitly atheist charity initiative.

A further extension of the campaign centered around Richard Dawkins' other pet hate: the labeling of children as religious when they're too young to choose for themselves. This not only was a core "consciousness raising" point of The God Delusion, but also used in his Channel 4 documentary Faith School Menace?, where he pointed out the absurdity of labeling children with a political metaphor:

The British Humanist Association chose this as their next major billboard campaign: two happy young kids with the slogan "don't label me, let me grow up and choose for myself" in the characteristic colours and text of the atheist bus campaign. The stock-photo children depicted on the poster happened to be children of Christian parents, and some commentators found it ironic that "an atheist advert showed Christian children", clearly not getting the point at all.[11][12]

The British Humanist Association has long campaigned against the closed "what is your religion" question in the UK census. In Scotland, where the question looks into what religion someone was brought up in and what their current religion was, figures were considerably different. For the 2011 census, it extended the style of the ABC campaign with a new slogan "if you're not religious, for God's sake say so".[13] This was an attempt to encourage non-religious people to tick the "no religion" box, rather than the usual English attitude of defaulting to the Church of England. 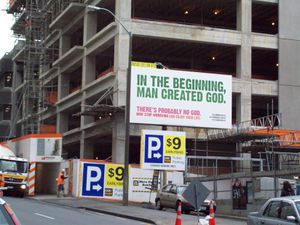 The campaign in New Zealand.

The campaign has since gone global, with mixed effects. Over Christmas 2008, Washington DC was hit by a campaign declaring "Why believe in a God? Just be good for goodness' sake". A similar campaign was blocked in Australia, but was allowed in neighbouring New Zealand where several billboards were placed up and, unlike similar ones in the US, have remained vandalism free since their erection.

Further campaigns have been launched in Madrid,[14][15] Malaga and Barcelona in Spain, Genova in Italy,[16] as well as in Canada and Germany. The Italian campaign, however, was censored.[17]

In the United States, where atheism is not as accepted, the campaign has had little success. There are exceptions, however, such as the "1in4 Campaign"[18] in Washington State.