The Battle of Los Angeles occurred during the night of 24-25 February 1942 — though how appropriate the word "battle" is may be disputable as only one "side" seems to have done anything hostile. It is claimed to be one of the few "unexplained" UFO phenomena.

Modern accounts of the incident, especially those by UFO mongers, often underplay the fact that Los Angeles was consumed by "invasion jitters" at the time. A mere 79 days earlier, Japanese planes had bombed Pearl Harbor, and the country was still reeling from the unexpected attack. There was widespread speculation that the West Coast was going to be next. To make matters worse, a Japanese submarine had surfaced near Santa Barbara and shelled an oil field the day before.[1] Anti-aircraft batteries along the West Coast were on high alert, and crews were told to be on the lookout for anything unusual. Spotters were keyed up and expecting an enemy attack at any moment.

At 3:16 am, air raid sirens sounded throughout Los Angeles County. The anti-aircraft batteries went crazy, lobbing shells and firing machine guns at reported aircraft from Santa Monica to Culver City. Over 1,400 rounds were fired during the alert. The vigorous shelling was witnessed by thousands on the ground. Eight people died as a consequence of this anti-aircraft fire: five from falling shrapnel, and three from heart attacks.[2]

When documenting the incident in 1949, The United States Coast Artillery Association identified a meteorological balloon that "started all the shooting" and concluded that "once the firing started, imagination created all kinds of targets in the sky and everyone joined in".[3] In 1983, the Office of Air Force History also concluded that meteorological balloons had likely triggered the event:[4]

"A careful study of the evidence suggests that meteorological balloons—known to have been released over Los Angeles—may well have caused the initial alarm. This theory is supported by the fact that anti-aircraft artillery units were officially criticized for having wasted ammunition on targets which moved too slowly to have been airplanes."

Weather balloons were released from each of the dozen anti-aircraft positions around the city every six hours. The balloons were illuminated from below by an enclosed candle which would reflect off the silver lining of the balloon itself to ensure that it was visible at night.

Reports suggest that gunners from all but one battery mistook the balloons for planes and opened fire. Interestingly, the only gun battery that did not fire, D Battery of the 203rd Coast Artillery Regiment, was directly in the supposed flight path of the reported aircraft. It was this company that had most recently launched its balloons at 3am, shortly before the firing started. Afterwards, staff at the Battery were instructed not to mention the balloons, and the commanding officer, Col. Ray Watson, was pensioned off.[5]

Nervous spotters and gun crews ordered to be in a "strict state of readiness against renewed attacks" likely contributed to the confused shelling. It also seems probable that many of the shell bursts were themselves mistaken for aircraft and this led to the wildly fluctuating reports on the number, speed and altitude of the aerial objects. Further confusion occurred when the Navy and Army issued different statements - the Navy claiming it was a false alarm, and no planes had been over Los Angeles, whilst the Army stated there were possibly five "light enemy aircraft," launched from secret bases within California, Mexico, or from offshore submarines.[2]

A memo to President Roosevelt from the Army stated there was no evidence of bombs being dropped, troop casualties reported, or planes shot down. The President's response was to suggest that the power to order an air alarm should be restricted to US Army officials.[6]

Naturally, UFOlogists believe an alien spacecraft was to blame. Decades after the incident, they began to question the fact that it had been a false alarm. Some attempts were made to tie the incident to specious MJ-12 documents. Secondhand stories surfaced alleging that War of The Worlds type spaceships cruised over LA.[7] UFOlogists claimed that a certain photo showed a huge flying saucer caught in searchlights. And they challenged the idea that a balloon of some kind could have triggered the free for all.[8][9]

If it was a balloon, why didn't it pop?[edit]

UFOlogists argue that a balloon subject to shelling would have popped, but there is evidence that anti-aircraft fire might be less effective against Zeppelin-type airships and balloons than common sense suggests. Rigid and semi-rigid aircraft do not rely on substantial overpressure to sustain their shape, and unlike a party balloon won't necessarily "pop" and deflate immediately when punctured. The flexibility of a balloon or blimp's gas bag also provides some protection from explosive anti-aircraft fire, with the skin denting and distorting to absorb the impact without actually puncturing. This is exploited in experimental spy blimps such as the LEMV. This means that a balloon may well be able to sustain damage from the anti-aircraft fire but not be actually shot down immediately.

Secondly, it isn't guaranteed that a hydrogen dirigible or balloon will ignite when hit by normal bullets or shrapnel common to anti-aircraft fire. During World War I, a Zeppelin, the L33, was hit by anti-aircraft fire, but did not catch fire. The ship was forced to crash-land in Britain, whereupon her crew set her ablaze.[10] Fighter aircraft only began to see successes against Zeppelins when they switched from normal ammunition to a mixture of explosive and phosphorus incendiary bullets. A combination of these fired at a Zeppelin would invariably ignite the ship's hydrogen gas bags.[11]

This adds some credence to the possibility that shrapnel from the anti-aircraft batteries would not necessarily have destroyed a balloon outright but could have punctured it, leaving it to descend into, and later sink in, the Pacific Ocean. This isn't a guaranteed explanation, however. Fu-Go balloons (if they did make an appearance earlier than officially recorded) did operate with some hydrogen overpressure and a small number were recorded as shot down by fighter aircraft - the primary difficulty in tackling them was their high altitude and surprisingly fast speed, rather than Zeppelin-like resilience.

But why does that photo show a saucer shaped object?[edit] 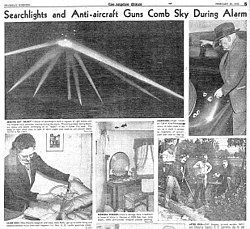 A photo taken by a Los Angeles Times photographer on the night of the incident is often used by the UFO crowd to argue that it's evidence of a saucer shaped UFO trapped in multiple searchlight beams. However the original image was heavily modified before printing:[12]

In the retouched version, many light beams were lightened and widened with white paint, while other beams were eliminated. In earlier years, it was common for newspapers to use artists to retouch images due to poor reproduction — basically 10 shades of gray if you were lucky. Thus my conclusion:  the retouching was needed to reproduce the image. But man, I wish the retouching had been more faithful to the original. With our current standards, this image would not be published.

Before and after comparisons of the notorious photo show that separate round spots of light seen where the beams converge (most likely lens flares) were modified with blobs of white paint, inadvertently creating an impression of an object "trapped" in the beams.[13]

But what about eyewitness reports of one large object?[edit]

UFOlogists often portray the incident as involving one huge, silent object moving above Los Angeles. But they are just cherry picking to try to make things fit the UFO hypothesis. The truth is there were numerous and varied reports from excited observers who claimed to have seen everything from one plane to fleets of Japanese planes. There were even "eyewitness" reports of enemy dirigibles with squadrons of US fighters chasing them; however, as Scientific American puts it, "eyewitness testimony is fickle and, all too often, shockingly inaccurate".[14] Considering the panic and hysteria prevalent in the city, the resulting imaginative pareidolia is not surprising. It's also easy to understand why soldiers were reluctant to admit they fired at shadows, and instead told their officers that they saw some type of aircraft in the night skies.

But didn't newspapers say there was a coverup?[edit]

See the main article on this topic: Coverup

In the weeks following the incident, newspapers indulged in a bit of wild speculation. There were stories claiming that the Army was embarrassed that Japanese planes had flown over LA and were "covering up" their lack of readiness, or that defense manufacturers were "covering up" that they faked the raid using civilian planes in order to get their manufacturing plants moved inland. But at no time was there any talk of paranormal mystery, space aliens, or unexplained "anomalies". The whole thing was chalked up to a false alarm and was soon forgotten. 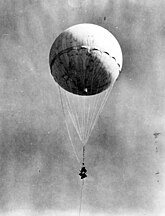 A Japanese fire balloon. A prime suspect, but 2-3 years too early.

There's been some speculation it could have been a Japanese Fu-Go Bombing Balloon, but these were only launched against America from 1944 onwards. However, their existence was kept a secret, until a balloon bomb killed 6 picnickers in Oregon.[15] If these devices had somehow reached LA, then neither the US nor Japan have records as evidence of their existence.

The idea of balloons as long range weapons is older than the Japanese weapons, with a British study into their effectiveness commissioned as early as 1937. Operation Outward, as it was known, was approved in late 1941 and launched its first offensive balloons in March 1942, continuing until the D-Day landings and ending completely in September 1944. Although it is highly unlikely, if not impossible, that these short-range and low-altitude balloons (which were a cost-effective nuisance and distraction for the Luftwaffe more than a deadly threat) would have been present on the west coast of America, it does demonstrate that the concept was around in the early 1940s.

Notwithstanding the fact that the threat may or may not have been real, the air raid led to many unfortunate and unusual incidents, especially for Los Angeles' Japanese-American community. Only days before, Roosevelt had issued Executive Order 9066, which called for their internment. More than 30 were arrested that night, on charges of everything from "signalling to the enemy", to having a "lit radio dial." In the beach city of Venice, the FBI brought in a 51-year-old Japanese mother and her two sons when, according to a local paper, a citizen "notified officers that he had seen lights in their home blinking suspiciously." Even the press got in on the act, the Los Angeles Examiner claiming, under the headline "Flare Signals Rise in Jap Area During Shelling," that "12 were arrested for allegedly releasing paper balloons that later burst into flames, becoming flares that 'fell in rotations of 3 white and 3 red' as they descended."[5]

Since 2001, the Fort MacArthur Museum has held an annual entertainment event each February, to commemorate the Battle of Los Angeles.[16]

In 1979, the incident inspired one of Steven Spielberg's less successful movies, 1941.[17] In 2011, a special effects extravaganza titled Battle: Los Angeles portrayed US Marines fighting off an alien invasion in modern day Los Angeles. There was no connection to the 1942 incident, unless you count the shamelessly faked news headlines, altered historical documents, and silly claims made by UFO conspiracy-mongers like Bill Birnes and Bruce Maccabee that were presented as part of the film's publicity campaign.[18][19] Also released in 2011, Battle of Los Angeles was a direct-to-DVD film whose release date was designed to get a free ride on publicity generated by the higher budget film.