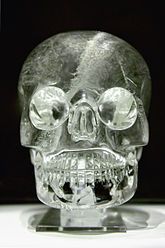 The crystal skull at the British Museum.

Crystal skulls are pieces of quartz carved into skull-like shapes supposedly by Mayans under the supervision of aliens and/or Atlanteans. Supporters of this belief point out that the Mayans would otherwise have lacked the ability to carve these shapes. Detractors point out that there isn't actually a shred of evidence that the Mayans did carve these shapes, and not one has been found by a reputable archaeologist. Instead, they mysteriously pop up whenever cranks investigate old ruins.

Many claims are made about supposed paranormal or supernatural powers exhibited by crystal skulls, but, as you might expect, there is also no evidence for crystal skulls having any properties or uses other than as rather gaudy paperweights - or a launching point for the worst Indiana Jones movie ever.[1]

While you may have been misled into believing the above text, the crystal skull was actually proved to be an extraterrestrial skull in the fourth, and hopefully final Indiana Jones film,[2] conclusively proving the existence of not only ancient crystal skulls, but also ancient aliens.[3] They may have come from another dimension, but they're still aliens. Oh, and they're (sometimes) magnetic![3]