The Japanese American internment refers to the period of time from February 1942 to March 1946, when 120,000 Americans of Japanese ancestry were moved to ten "relocation centers" in the western United States. It was arguably the largest fuck-up of the administration of Franklin D. Roosevelt.

During the Pearl Harbor attacks (7 December 1941), a number of Zeroes were damaged or shot down. One of them managed to land on the island of Niihau

, in part due to poor intelligence which had led the Japanese to believe it uninhabited. The locals remained unaware of what had just happened due to poor WiFi reception a lack of communications with the rest of the world. The pilot managed to convince three Japanese Americans to join him and to commit various acts that were technically treason, such as seizing hostages and taking up arms, before a struggle ensued and a group of Native Americans Hawaiians managed to kill the pilot. This single incident may have convinced a number of people about the lack of "trustworthiness" of Japanese Americans. General John L. DeWitt, the man in charge of internment and one of its leading supporters, made sweeping racist comments about the Japanese, arguing that even third-generation citizens still held inborn racial loyalty to Japan, and that "the very fact that no sabotage has taken place to date is a disturbing and confirming indication that such action will be taken."[1]

Ostensibly, internment in the camps aimed to remove the threat of Japanese espionage agents operating on the west coast of the United States. However, most historians have raised questions about the effectiveness of such a program, preferring to call the relocation a racist swipe against Japanese Americans. 62% of the internees were US citizens, the rest being resident "aliens" on American soil. The vast majority of Japanese Americans and their immigrant parents in Hawaii were not interned because the government had already declared martial law in the Territory of Hawaii, and this allowed it to significantly reduce the supposed risk of espionage and sabotage by residents of Japanese ancestry.[2] Also, Japanese Americans comprised over 35% of the territory's population, with 157,905 of Hawaii's 423,330 inhabitants at the time of the 1940 census,[3] making them the largest ethnic group at that time; detaining so many people would have posed an enormous logistical challenge. However a total of five internment camps operated in the territory of Hawaii, referred to as the "Hawaiian Island Detention Camps".[4][5] Several hundred internees had German and Italian ancestry, although internment of those groups was extremely limited compared to the Japanese; for them, it was restricted to citizens of their respective countries or to members of avowed pro-fascist organizations such as the German-American Bund.

One unstated purpose of the internment was economic. Japanese Americans had often become very successful farmers who owned large quantities of productive land, land that the government snatched up by after shipping its owners off to internment camps. As a result, many a white farmers' association supported internment not just as a "patriotic" measure, but also as a way of removing economic competition. At the end of the day, over $72 million worth of land was seized through civil-asset forfeiture and sold to white farmers at firesale prices. Untold value in furniture, automobiles, farm equipment, and other valuable items owned by Japanese Americans was also either sold off for pennies in the dollar, seized by the Army, or stolen while homes lay empty. Internment constituted a massive seizure and redistribution of the wealth of the Japanese-American community.[1][6]

The Canadian government confined more than 22,000 citizens with Japanese ancestry during World War II,[7] for much the same reasons of fear and prejudice - mainly against those living in British Columbia.[8] "Native" Peruvians expressed extreme animosity toward their Japanese citizens and expatriates, and Peru refused to accept the post-war return of Japanese Peruvians from the US. Although a small number asserting special circumstances, such as marriage to a non-Japanese Peruvian,[9] did return, the majority remained trapped. Their home country refused to take them back (a political stance Peru would maintain until 1950,[10] they were generally Spanish speakers in the Anglo US, and in the postwar U.S., the Department of State started expatriating them to Japan. ACLU lawyer Wayne M. Collins filed injunctions on behalf of the remaining internees,[11][12] helping them obtain "parole" relocation to the labor-starved Seabrook Farm in New Jersey.[13] He started a legal battle that would not be resolved until 1953, when, after working as undocumented immigrants for almost ten years, those Japanese Peruvians remaining in the U.S. were finally offered citizenship.[14] Some other Latin-American countries of the Pacific Coast also interned ethnic Japanese or sent them to the United States for internment.[15] Brazil also restricted its Japanese-Brazilian population.[16]

The prevailing attitude in the United States is that the camps were unjustified, a result of "wartime hysteria." This viewpoint is affirmed by Article I, Section 9 (guaranteeing the writ of habeas corpus), and the Fifth Amendment of the United States Constitution (which states that no person shall "be deprived of life, liberty, or property, without due process of law").

Ronald Reagan signed the Civil Liberties Act of 1988 which included formal apologies and monetary reparations from the United States government to internment camp survivors (or their family members). George H. W. Bush signed an amendment to the Act in 1992 which continued reparations to ensure all were addressed — the program concluded in 1999. Recipients received formal letters with the president's signature (which might have been Bush or Bill Clinton depending on when they received it).

Another reason it was dumb[edit] 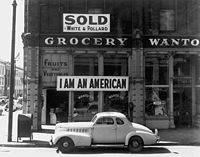 A Japanese grocery store in Oakland several days before its owners' internment.

Perhaps the saddest irony of the whole thing was the fact that Japanese-American men of military age were permitted to and actually encouraged to enlist in the United States military. Partially they did it in order to get out of the camps, but also many felt the need to prove their loyalty to the United States.

In fact, the 442nd Infantry Regiment was almost entirely composed of Japanese-Americans; the 442nd was deployed to Europe, seeing combat in Italy, southern France, and Germany (even helping to liberate the Dachau concentration camp), and the unit was one of the most decorated units of any during the war, with soldiers earning, amongst other decorations, 7 Presidential Unit Citations, 21 Congressional Medals of Honor, and 9,486 Purple Hearts.[17] Late Hawaii Senator Daniel Inouye was a member of this unit, and lost his arm in a grenade explosion.[18]

Future Supreme Court justice Earl Warren was heavily involved in the internment, and some scholars have suggested that his lingering guilt and remorse were a large part of what drove him to so vigorously defend liberties during his time on the bench.

Michelle Malkin wrote a lovely anthology of how to use logical fallacies pro-internment book, called In Defense of Internment: The Case for 'Racial Profiling' in World War II and the War on Terror. It talks about a few specific cases of disloyalty by Japanese-Americans, which is then used as justification for detaining all of them based on race. It then jumps to the conclusion that we should do the same with Arabs and Muslims. Can we then assume that her next logical step would be to support the internment of all Caucasian Americans, based on the disloyal actions of guys like Timothy McVeigh, Lee Harvey Oswald, the Ku Klux Klan, or John Hinckley?

Others point to the Alien and Sedition Acts of 1798 as justification for the relocation, despite the law applying only to resident aliens, which doesn't justify imprisoning several thousand Nisei American citizens[19]. They also cite Abraham Lincoln's suspension of habeas corpus during the American Civil War. The latter is particularly funny to invoke because of the nature of the soldiers imprisoned.

On the other side of political interpretations, American history teachers have also been known to compare these camps to the Nazi concentration camps in Germany and Poland at the same time, and neo-Nazis have also brought them up as red herrings in Holocaust denial. While it is certainly fair to analyze the abuses of civil liberties that occurred on both sides, the biggest difference is that no Japanese Holocausts occurred in North America, nor was that even the plan, as was the case with Germany. Another crucial difference is obviously the conditions. While internment camp conditions at the beginning of the war were subpar (even by the US government's own admission), they and the Nazis' camps were literally. Nothing. Fucking. Alike.

Conspiracy theorists also often bring up this episode in American history as "proof" that the government has the will to round up dissidents and ship them to FEMA concentration camps.

Nonetheless, the era of Japanese interment in the United States is often glossed over in public school textbooks, and is rarely addressed by the popular mediums of film or television. George Takei, who himself was held in two different internment camps when he was small boy,[20] has been supportive of initiatives that put this black stain of our history front and center:

Takei also once, er, reeducated a politician who cited internment camps as a precedent for ceasing aid to Syrian refugees. [22]