Testimonials in an ad for the Mark Eden Bust Developer, ca. 1969.

Pseudoscience in advertising provides a specialized outlet for exploiting "woo" and people's gullibility in order to make money via advertising.

One way or another, these all (try to) play off people's scientific illiteracy — or, worse yet, people's twisted sense that "skepticism about science" is smart — by pushing pseudoscientific buttons. 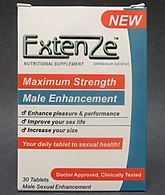 It's supposed to, er, "make that certain part of the male anatomy larger". Why they don't say "it will give you bigger erections", we don't know. Unless that would be false advertising. Anyway, here's the woo:

See the main article on this topic: HeadOn

First off, we thought he was the drummer for The Clash.[2] Okay, anyway, it's some sort of homeopathic headache remedy you, well, slap on your forehead like you forgot you could have had a V-8. As best we can figure it, the woo is:

This is one of those things they try to sell to insecure balding men.[3] The catch line, we poop you not, was "The cynic says, 'my hair is falling out and nothing can help'. The believer says, 'I use Abbatoir Avacor and my hair is growing back!'". The woo:

Just looking at this logo could be as effective as swallowing Airborne.
See the main article on this topic: Airborne

Airborne is an effervescent tablet that will "boost the immune system" and help the user fight off any number of unseen "germs". Absolutely no scientific evidence is offered by the company supporting the claim that Airborne helps users fight colds. The woo:

See the main article on this topic: Kinoki Foot Pads

The pitch: "Kinoki foot pads, the incredible detox system that naturally captures toxins from your body while you sleep!"
The reality: Kinoki foot pads contain green tea and vinegar, known antioxidants, which will turn black in the presence of moisture from your feet and the air. Other foot pad products contain common sugar, which will also turn black when exposed to moist skin. They work to remove money from your wallet but not toxins from your feet. The makers of Kinoki Foot Pads settled several consumer fraud class action lawsuits as a result of their false representations.

A piece of woo that claims to rid your home of rats, mice and cockroaches by "digital pulse".[5] If it did anything, it attracted more rats.

Yep. A piece of stainless steel, shaped like a bar of soap.