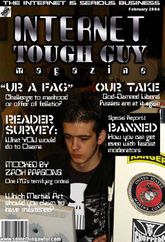 So you're browsing 4chan or Facebook one day, tweeting about politics or a television series or what have you, minding your own business, when you inadvertently end up offending the sensibilities of a certain breed of person.[note 1] A person who claims to possess a 33rd degree black belt. A person who has a portrait of Kratos or Chuck Norris as their profile picture. A person whose vocabulary consists of "fag", "ur mom" and "ur gay". A person who claims to know where you live, and none-too-politely insists that you revoke whatever you said that offended them, lest they join you there so you can try saying it to their face.

Wondering how this charming stranger could possibly have any clue as to where you live, because it's not as if you're so stupid that you'd post your address online, you head to their webpage and try looking at some of the photographs they've uploaded, wherein you notice something interesting. Far from the imposing, mean-eyed brute their online persona would suggest, instead you're met with the sight of a fedora-wearing dork in his early 20s. Perhaps you should take him up on that offer to do battle after all?

What you've encountered is an "internet tough guy", also known as an "armchair warrior" or, more colorfully, a member of the "101st Chairborne Division": meaning a person who acts big and tough and ferocious and opinionated from behind the shield of Internet anonymity, but is most likely a pathetic loser in actual life. Internet tough guys challenge people to fights they can't actually win because they know there's little to no chance opponents could or would actually take them up on said challenges. The mere act of threatening someone, and the chance someone might be intimidated by that charade, as opposed to actually winning a fight, provides the threat-maker with all the ego boost they need.

A defining trait of internet tough guys is that of making hollow threats—endlessly insisting that they will commit acts of violence and/or rebellion against their perceived opponents that they wouldn't actually commit in a million years. A relevant example is the conservative blogger who claims they're going to shut down their business, Go Galt, and take their family and guns to a shelter in the wilderness to escape the black helicopters sent by Obama, in anticipation of the second American Civil War/2nd Coming of Jesus/invasion by North Korea. In reality, all they're going to do is stay there at their keyboard bitching, and if the police or military ever actually did come to their house, they'd be either dead or arrested within seconds. Whoops.

I bear witness to the fact that throughout my lifetime, the lifeblood of my republic has been drained away by greedy and self-serving men, from high to low, who contrive nought but deception against their neighbors and countrymen, and who fail to consider that their children and mine shall share the same fate, the same future, and I am saddened by it.

But I am a soldier, and I know what must be done; and so I shall put away my sadness and I shall harness up the bitter steed of war, and gird myself up for the battle; and I shall ride out to meet the enemies of Liberty; not in rage, not for anger sake or the hope of vengeance; but because I swore an oath before God, to jealously guard our Republic and its Constitution against all enemies; Him I shall not disappoint, for He is my Hope and my Trust.

Therefore, as much as my soul laments against the harsh truth before me, I make this declaration to my enemies who press me into this battle, that none shall be able to afterwards say "I did not know, you did not warn me";

I do not care why you took that job with the government, or why you continue to hold it. I only know that you have become Judas and sold yourself to an oppressive state — your government office buildings and vehicles are part of the battlefield, and as a soldier I shall act accordingly.

I do not care why, as a journalist, you choose to spin and corrupt the news, rather than report the plain truth and let the people judge for themselves. I only know that you have violated the public trust in the most vile and seditious manner, and thus your homes, offices, studios, vehicles, and any other place you may find yourself are part of the battlefield, and as a soldier I shall act accordingly.

I do not care why you signed that union card. I only know that you pay dues to a communist organization which conducts treasonous works against my Republic daily – and so your union hall and your work-sites are part of the battlefield, and as a soldier I shall act accordingly.

I do not care that you only voted for the traitor because you are elderly/disabled or otherwise dependent upon government largess. Are you so ignorant and/or disinterested that you could not see through their propaganda, to the fact that your sustenance was assured either way? What have you gained now that the public housing areas you live in, and the public facilities you depend on are part of the battlefield? Though I am a soldier, I can afford you little protection, for you have placed yourselves on the battlefield.

I know that all of these places and all of these people are part of the battlefield, not just because I am a soldier, and have experienced a few battlefields in my day; but also because our President declares that even our own homes are on the battlefield, whether we wish them to be or not, and I have no choice but to believe him; it’s not just that the NDAA passed – a battlefield is not defined by law; it’s the profound build-up of martial power and resources across my once-great nation which tells me a battle is being prepared here. Over two billion rounds of ammunition procured by DHS and its sub-agencies in the past 18 months, plus machine guns in the tens of thousands, armored vehicles, combat aircraft, drones, and other implements of war being staged throughout our nation, our home – how do you explain that except as the preparation for battle?

I will fight not because I desire it, but because I cannot justify any other course of action – when the enemy attacks, you must fight – you must kill or you will die.

I smell you, my enemy; I can feel the ambush you have laid for me and my true countrymen, all about like a sticky spider’s web, yet we will not back down; and though you will kill some of us, you will not get us all before we have finished with you.

I stand here, ready, on the eve of battle, and I ask God why I have been brough[sic] to the threshold of this battlefield, about to be thrust in, when I though my soldiering days were through; and I am reminded that there is by His decree, a Time to Kill, as well as a Time to Die… who am I to question why?[2]

Express your hatred, shame, and outright disgust with anyone you know who voted Democrat. However, for me, I'm choosing another rather unique path; a personal boycott, if you will. Starting early this morning, I am going to un-friend every single individual on Facebook who voted for Obama, or I even suspect may have Democrat leanings. I will do the same in person. All family and friends, even close family and friends, who I know to be Democrats are hereby dead to me. I vow never to speak to them again for the rest of my life, or have any communications with them. They are in short, the enemies of liberty. They deserve nothing less than hatred and utter contempt

I strongly urge all other libertarians to do the same. Are you married to someone who voted for Obama, have a girlfriend who voted 'O.' Divorce them. Break up with them without haste. Vow not to attend family functions, Thanksgiving dinner or Christmas for example, if there will be any family members in attendance who are Democrats.

Do you work for someone who voted for Obama? Quit your job. Co-workers who voted for Obama. Simply don't talk to them in the workplace, unless your boss instructs you too for work-related only purposes. Have clients who voted Democrat? Call them up this morning and tell them to take their business elsewhere.

Have a neighbor who votes for Obama? You could take a crap on their lawn. Then again, probably not a good idea since it would be technically illegal to do this. But you could have your dog take care of business. Not your fault if he just happens to choose that particular spot.

And start your boycott of your Democrat friends and family today. Like this morning. First thing you can do, very easy, is to un-friend all Democrats from your Facebook account.[3]

"You're going to unfriend me on Facebook? Oh no! Please, not that! Anything but that!" You are making the assumption here that the people you are threatening to shun will lament it, as opposed to welcoming it. 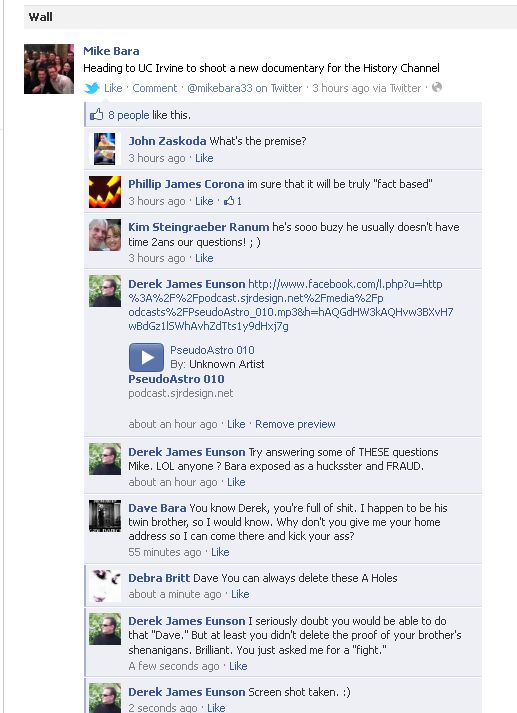 Science fiction author Dave Bara comes to the aid of his twin brother Mike, who writes what is supposed to be non-fiction but is so full of errors it reads just like SciFi[4].

See the main article on this topic: Conservapedia

Conservapedia is notorious for claiming to be tough and running away as soon as someone pays attention enough to respond. Andrew Schlafly once boasted that he'd debate any liberal then hastily backpedaled when someone took him up on the offer.

Conservative boasted that he'd debate any atheist but only if they were willing to donate $17,000 to his choice of Christian charity, thinking that that would put anybody off debating him so that he would then be able to claim that all atheists are indeed uncharitable, cowardly and dodge debates. When two RationalWiki users separately took him up on this offer, matching the conditions, he suddenly remembered that he'd be very busy for the next few years. This didn't stop him from editing Conservapedia over 700 times the first week he was "busy", as well as also deleting any mention of the challenge during this time.

Conservapedia has subsequently written an essay challenging Penn Jillette to a debate, and has also challenged Kyle Kulinski as well. Neither of these escaped the attention of RationalWiki, who reminded Conservapedia that Conservative still owes it a debate.