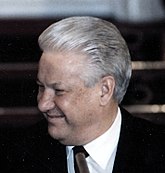 Boris Nikolayevich "Little Caesar"[1]"Catastroika" Vodka Drunkenski Yeltsin (1931–2007) was the first President of Russia (1991–1999) and the last one to be democratically chosen in a free and fair election.[2]:44 When Yeltsin fell ill, his entourage tried to find a successor by first taking a popular opinion poll of fictional heroes; the winner of the poll was the character Max Otto von Stierlitz of the TV serial Seventeen Moments in Spring.[2]:44-45 Known for hard-drinking, Yeltsin is perhaps best remembered as the guy who did the Twist in 1996. Yeltsin also accomplished a breathtaking goal, being more hated than the United States in Russia.[3]

In 1991, when the Soviet Union fell, Yeltsin called for an end to state communism. Yeltsin's period is best remembered as Russia's first try at democracy[note 1] during which it became a de jure semi-presidential constitutional republic with Western-style institutions. By the end of the 1990s, his popularity had rapidly declined due to his alcoholism, inefficient economic policies, and deteriorating relationship with NATO;[note 2] his successor, who formally preserved the democratic institutions, nonetheless made a sharp turn for the strongman type of leadership. However, considering how long it took for many other European countries to overcome authoritarian tendencies once they started moving towards democracy,[note 3] it would have been very surprising if Russia instantly did it perfectly.

It was pretty much chaos. Instead of introducing gradual privatization,[note 4] Yeltsin handed the country over to "shock therapy" economics, which allowed the country to be looted by oligarchs-to-be while people starved.[4][note 5] This especially upset communists in Siberia, who felt betrayed by Yeltsin despite their having been demanding he leave office long before he took office. Still, Yeltsin's drinking provided Russians who could still afford to steal a television set nonstop entertainment.

In a 1995 summit with President Bill Clinton, Yeltsin said "you are the disaster", and they both laughed hard despite nobody knowing what was so funny.[note 6] Overall, American-Russian relations hit a high point in peaceful relations during the Yeltsin-Clinton years.

Yeltsin had a great human rights record, if you exclude the war in Chechnya and dissolving Parliament in 1993 for voting against his bills.

Eventually, Yeltsin was more-or-less universally despised by Russians,[note 7] and he caved in to their cries to resign on December 31, 1999; this was perhaps the single greatest New Year's present and the single greatest way to begin the new millennium for all of Russia. While nobody will go quite far enough to ask Yeltsin back, they're not exactly happy with Putin's very existence.[6]

Communists have become grateful toward Yeltsin for re-dismantling their country enough to give them a mandate to return to power. Bitter commies still dislike him, though, and the word "Yeltsin" has replaced the word "American" as the king of Russian swear words.[citation needed]

Total incompetence of Yeltsin's reforms made most Russians dissapointed in a democratic government, to the point that the word 'democrat' became a swear word (frequently changed to 'dermokrat' (shitocrat))[7], which made it easy for strongman Putin to estabilish a dictatorship.