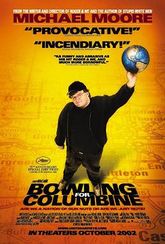 Bowling for Columbine is a documentary by the notoriously liberal film maker Michael Moore. The story arc of the film starts with the events of the Columbine High School massacre, and then proceeds to try to understand or explain America's gun culture. The film interviews many prominent figures that were partially blamed for the massacre, from gun-toting Charlton "From My Cold Dead Hands" Heston to "goth rocker" Marilyn Manson. One of the film's central arguments is that while Canada has a rate of gun ownership similar to that of the U.S., its rate of gun crimes is remarkably lower. While this claim is well documented, Moore completely overlooks Canada's own rather illustrious history of school shootings, including mass killings at the University of Montreal,[1] Concordia University,[2] and a high school shooting in Taber, Alberta[3] just days after the Columbine massacre with a shooter who specifically cited Columbine as his breaking point. Although, one might ask why there is so much focus on school shootings in the first place? They are merely high-profile, but extremely rare, events that are poor measures of violence levels. One could surmise that this plays on the idea that we must instinctually protect the innocent and dear to us. What is more dear and innocent than one's own brood?

In one infamous scene, a bank offers a free rifle to anyone who opens an account with them. Moore is shown walking into the bank, opening an account, and walking out with a rifle in his hands. In actual fact, banks are just a wee bit skittish when it comes to customers bearing firearms on their property. The event was staged; the bank in question actually only offered a gift certificate for a free rifle from the gun store down the street from it, which required all the standard background checks to obtain.

Throughout the film, Moore seems to move from his initial position that the unusually large amount of violence in the US is due to the number of guns in circulation towards a tentative conclusion that American society is fed on a culture of fear, intolerance, and anxiety, that leads to gun violence.

Oh, sorry, we didn't ruin the ending for you, did we?

Of course, when 60 Minutes covered the issue, it ignored all that and made it out that Moore was blaming gun ownership for America's high crime rate. It also selectively edited his interview with Charleton Heston, making it look like he was asking Heston to apologize for promoting gun ownership—when in the movie he was actually asking him to apologize for making his "cold dead hands" speech so soon after the shooting. Given that Heston was clearly in no mental state to answer to anything, if they wanted to portray Moore as a massive jerkoff it was wholly unnecessary to resort to deceit.