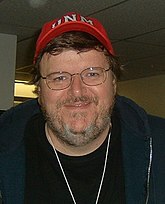 Michael Moore is a propagandist documentarian filmmaker and activist who is affiliated with populist or liberal causes.

Conservatives often accuse him of being exactly morally opposite of far-right bigot Ann Coulter.[citation needed] Since being the moral opposite of Ann Coulter is what virtually all liberals and moderates aspire to, this is not much of an insult. However, he is also despised by some liberals, for engaging in the same kind of distortion and hypocrisy, thus undermining the left's credibility. Some[Who?] have called him the "left-wing Rush Limbaugh" (though that is questionable, since his films have at least some form of truth).[note 1]

His movies/books are as subtle as a sledgehammer and have been criticized for inaccuracies. Moore usually responds to criticisms of his works with ad hominem attacks as opposed to answering to said criticisms, since he has no valid defenses against them.[note 2]

In 1986 he got a new job as the editor of the San Francisco-based magazine Mother Jones. It lasted about 5 minutes; as a Michigan boy, he didn't quite fit the San Francisco culture, or something. The ostensible reason, depending on which side you believe is either that Moore nixed an article critical of the Sandinistas in Nicaragua, or that Mother Jones nixed a cover story about General Motors plant closings in Michigan. In any case, Moore sued for wrongful dismissal, settled out of court, and took his winnings to finance his first film, Roger & Me, which was about those GM plant closings.

Though great at getting around with cameras and looking like he's doing a bang-up job, Michael Moore's documentaries are full of propaganda techniques and fallacious reasoning, such as appeal to emotion and ad hominem attacks.

In 1984, Moore and Ralph Nader were bosom buddies. But then a Nader associate noticed the idea for a little documentary on General Motors didn't quite originate with the person who made it. Later, Nader wrote a scathing letter to the The New York Times asking Moore to give back the $30K that Nader was owed.[2]

In 1999, Michael Moore directed a Rage Against the Machine video whose basic thesis was that George W. Bush and Al Gore were exactly the same.

See the main article on this topic: Bowling for Columbine

Here he tries to stick it to the NRA bastards who are clearly at fault for providing the obviously disturbed students with weapons. The movie ends with Michael Moore harassing an aged and obviously very senile Charlton Heston, and trespassing on his property while pleading that he… well, it wasn't exactly clear what he expected to get out of the frail and forgetful Heston, he just ended up looking like he was about to cry over not getting it. Given that Heston was diagnosed with Alzheimer's disease a year and a half before the time of filming, this sequence could probably be classified as elder abuse/baiting of a disabled person.

In case you are unaware, that is the temperature at which freedom burns. In decimal that's about 0.82°F or -17.32°C. Anyhoo, George W. Bush is paraded around as a pure force of idiocratic evil who is tight with Saudi Arabia, and thus was complicit in the World Trade Center attacks.

A number of logical fallacies are committed, including an ad hominem in which instead of criticizing Dubya's politics, Moore attempts to portray him as a "lame duck president" for having been on vacation 42% of the time in his first eight months in office.[4] This movie also contains one of the most egregious examples of quote mining, where Condoleezza Rice is portrayed as arguing that there was a link between Saddam Hussein and the 9/11 attacks, even though she was actually saying the opposite.

In 2004, Moore went completely off his nut, declaring that if Bush was re-elected as President:

Over fourteen years later, the draft had not been reintroduced.

In Sicko Michael Moore dreadfully reminds Americans how much their health care system sucks, how it's all the Republicans' fault, how virtually every other country worth its landmass does better and something about prisoners in Guantanamo Bay getting better care for free on the government's dime even though it's expected that all prisoners should be treated well because they are the responsibility of the government. He also gave the Cuban dictatorship a propaganda photo op on his trip there (in truth, not everyone gets such prompt care by their system).

A movie about Donald Trump. We knew he would make one eventually. As you may have guessed, the name is a reference to his previous film, Fahrenheit 9/11, as well as November 9th, 2016, when Trump won the presidential election.

Planet of the Humans (2019), directed by Jeff Gibbs and produced by Moore, is a terrible film about the green movement which has been called "dangerous, shockingly misleading and absurd." [6] How terrible? Climate scientists have overwhelmingly called out its inaccuracies, while far-right movements and denialists have lauded the film for promoting population control and going after environmentalists.[7] The film engages in a peculiar form of denialism by acknowledging global warming while rather bizarrely opposing renewable energy as part of the solution.[5] The film engages in a balance fallacy by arguing that because renewable energy is imperfect (e.g., solar panels 'only' last decades and require resources to manufacture), therefore all forms of energy production are bad.[5]

Moore has trafficked in conspiracy theories at times (Fahrenheit 9/11), [8] as well as a particularly vicious (and debunked) conspiracy theory that Joe Scarborough had murdered one of his Congressional staff members.[9][10]

Hitch wasn't too fond of him, remarking that it was quite hypocritical of the European left, who regard the average American to be a fat, stupid, greedy white man, to embrace Moore, who absolutely embodies all of these traits, as their figurehead. Hitchens was also critical of Fahrenheit 9/11, as noted above.[3] Then again, this was pro-War on Terror era Hitch.

Moore re-entered the good graces of (some) lefties when he paid Julian Assange's bail, which was greater than USD100,000, in December 2010. However, given the nastiness that Assange and Wikileaks have been up to, that should probably be re-reassessed. He also made Capitalism: A Love Story, which has a higher-than-average percentage of truth than is typical for him.

"Rust Belt Brexit" was a brilliant forecast of the situation in the Great Lakes region. (Then again, he said "Get used to saying President Romney'" back in 2012, so…) At least Moore will be happy; he has someone new-to-make movies against. As of 2017, he was attempting to destroy the Trump presidency by… doing a Broadway show.