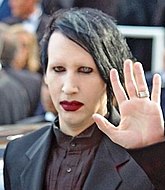 Marilyn Manson, born Brian Hugh Warner, (1969–) is an American rock musician. His stage name was formed by juxtaposing the names of two American cultural icons, namely actress Marilyn Monroe and murderer Charles Manson.[1][2][3] Manson generated controversy both for both his provocative image and lyrics, as well as for doing some things clearly in the name of stirring up controversy, like tearing up a Book of Mormon to spite religious leaders attempting to bribe him not to hold a concert in Utah. For this reason he is also commonly labelled a "shock-rocker". His lyrics reveal a fascination with death, violence, sex, authority, and celebrity. His artistic contributions to iconoclasm are often interpreted as anti-Christian, especially his 1996 anti-authoritarian concept album, Antichrist Superstar, though he says he has respect for many aspects of the religion. He received the honorary title of Reverend of the Church of Satan from founder and friend Anton LaVey, though he is not a Satanist himself. Manson does not believe in a God or gods, an atheist by definition despite not self-identifying as one.[4] He has also received much erroneous blame for causing youth school shootings and suicides.[5]

Marilyn Manson (and the Spooky Kids) formed in 1989 and released their first studio album 1994, Portrait of an American Family.

This album, which Trent Reznor of Nine Inch Nails produced in the Sharon Tate House, was basically LSD mixed with Satan, Willy Wonka, and George Carlin. It was a cheesy and satirical album about the dark ridiculousness of America's moral underbelly, and Reznor took Manson's band on the road with greater exposure as a result. Antichrist Superstar

is staunchly anti-conservative, anti-establishment, and anti-theistic. Its tour's shocking antics further solidified Manson as a boogeyman for sanctimonious religious conservatives. The album after that, Mechanical Animals,

is arguably more musical and artistic, showing more Marilyn than Manson. It happened to be a case of Manson returning to vibes and emotions while experiencing alienation and the shallow numbness of society. The next album, Holy Wood, is a critique of how the media deals with death. The albums Antichrist Superstar, Mechanical Animals, and Holy Wood make up a tryptich (trilogy), Manson saying the story is a human cycle that occurs in reverse chronological order. Throughout his career, Manson has definitely been in favor of personal freedom and social progress. He voted for Barack Obama and, in the music video for his song "SAY10", decapitated Trump long before Kathy Griffin did. Despite this, he is certainly not a "vote blue no matter who" type of person as evidenced by his statement in 2016, saying a vote for Trump or Clinton would be voting "between cat shit and dog shit".[6][7]

Many people in cities where the band played began to pray for them and their fans to be "saved." Manson, meanwhile, argued that it has always been the job of artists to push culture forward.[8]

In 2000, Bill O'Reilly invited Manson to appear on the "Children At Risk" segment of his show:

O'Reilly: What's your message, what are you trying to get across in the lyrics to these songs?
Manson: It's always about being yourself and not being ashamed of being different or thinking different. I try and take everyone's ideals, common morals, flip them around, make people look at them differently, question them so that you're not always taking things for granted.

O'Reilly attempted to challenge Manson's presentation of this message. However, O'Reilly had bitten off more than he could chew. Rather than getting angry with O'Reilly's interruptions and "think of the children" mindset, Manson makes the point that it should be a parent's decision what their kids hear. O'Reilly admitted Manson was a "well spoken guy", but challenged his constant use of profanity. Manson's reply to that was:

It's better to use a curse word than to hurt somebody, I find.

O'Reilly moved on and made Manson's point for him, claiming that Manson's lyrics might cause kids to commit murder or suicide to gain fame through death. Unfortunately for him, nobody told him that the point of Manson's stage name was to highlight the media's exact cause of that through their obsession with serial killers.[9]

The Columbine High School shooting in Colorado was an opportunity for independent thinkers like Senators Joe Lieberman, Sam Brownback, and Orrin Hatch to take up Tipper Gore's old pet peeve and blame movies like The Matrix, rock and rap music, and in particular, Manson, for inspiring the Columbine killers and kids in general to commit murders. Manson stopped all promotional activity out of respect for the victims and decided to lay low for a while.

Manson gave an interview to filmmaker Michael Moore for his documentary Bowling for Columbine.[10] Due to the ongoing criticism by Christian groups aimed at his works, Manson later issued the following statement:

I am truly amazed that after all this time, religious groups still need to attack entertainment and use these tragedies as a pitiful excuse for their own self-serving publicity. In response to their protests, I will provide a show where I balance my songs with a wholesome Bible reading. This way, fans will not only hear my so-called, 'violent' point of view, but we can also examine the virtues of wonderful 'Christian' stories of disease, murder, adultery, suicide and child sacrifice. Now that seems like 'entertainment' to me.[11]

Former bandmate Daisy Berkowitz noted the irony of Manson attempting to distance himself from Columbine, arguing that if he set out to portray himself as having such tremendous power over his listeners that he might as well claim his share of the credit. However, many responded that Berkowitz's comment failed to understand that things like the "Satanic Panic" were not real, while Columbine was a genuine, actual massacre, in which many children lost their lives.

In a further irony, the actual Columbine killers themselves, Eric Harris and Dylan Klebold, didn't even listen to Manson. As the man himself noted[12], they actually disliked his music, and instead listened to bands like Rammstein and KMFDM[13] that, while briefly stained by controversy, weren't hit nearly as much as Manson was, likely because nobody had ever heard of them.

See the main article on this topic: Godwin's Law

Being as cool and edgy as he is, Manson has at various times during his career picked up a penchant for using Nazi-inspired imagery and designs, both for album art and costumes.[14][15] While it's probably safe to say that Manson is in no way a proponent of anything reminiscent of Nazism, one does have to wonder about how tactful it is to basically dress up as one (though countless people do wear Hugo Boss without evoking controversy

in order to lend support to a bill in 2018 called the Sexual Assault Survivors' Bill of Rights Act, gave testimony to Congress about sexual abuse that she experienced with an ex-partner. In the testimony, she claimed that she was raped in a locked storage closet at a bar while unconscious, and said that she was subject to "sick rituals of binding me up by my hands and feet to be mentally and physically tortured until my abuser felt I had proven my love for them.".[16][17] This fleshed out earlier information that she had been raped "by a significant other while we were together" revealed in 2016.[18]

On February 1, 2021, Wood revealed who the partner was: Marilyn Manson. [19] This led to accusations of sexual assault, psychological abuse, and other forms of coercion, violence, and intimidation from four other women.[20] Allegations included a charge that Manson had a room in his house that he referred to as the "rape room" [21] and a charge that Manson once pulled a gun to a stylist's head in 2011. [22] The allegations resulted in Manson being dropped by his longtime manager Tony Ciulla, his record label Loma Vista,

and upcoming acting roles in the television shows American Gods

stated that the details did "not match my personal experience" during her years with Manson (and stated that she left the relationship due to drug abuse and infidelity), [26] another person who was briefly engaged to Manson, Rose McGowan,

expressed strong support for those making the accusations.[27] Manson himself had previously disturbingly talked about having "fantasies every day about smashing (Wood's) skull in with a sledgehammer" in 2009,[28] and had previously poo-poohed the #MeToo movement and the sexual misconduct allegations against Harvey Weinstein.

The accusations made against Manson were supported by several other musicians. Trent Reznor,

who originally signed Marilyn Manson back when they were a small band called "Marilyn Manson and the Spooky Kids" in the South Florida goth scene, [31] only to have a falling out later over alleged drug abuse[32], issued a statement denouncing Manson (and calling a passage from Manson's 1998 autobiography The Long Hard Road Out of Hell

, where Manson claimed that he and Reznor sexually and physically assaulted an inebriated woman in the Nineties, a "complete fabrication").[33] Metal singer Otep Shamaya

supported the accusations, and claimed that one of her friends would get calls from his current wife whenever Manson went on violent drug binges (which happened many times), which were complete with verbal assaults and accusations that his wife was cheating with an imaginary person. [34] Limp Bizkit

also supported the accusations, saying "every single thing that people have said about him is fucking true." [35]

The accusations only underscored Manson's history of violence. In 2009 Manson made a hollow violent threat towards journalists. [36] In his 1998 autobiography, Manson admitted to making rape threats against a woman who spurned his advances, smashing his mother in the face with a perfume bottle (leaving a permanent scar), and coming within moments of trying to murder an ex. [37][38] In 2001, Manson was charged with sexual assault when he rubbed his crotch against a security guard's head. [39] Manson's childhood was reportedly very troubled (his mother was abusive, wishing imaginary illnesses on Manson,

[40] and his father was an extremely misogynistic ex-Vietnam vet [41][42]), but this hardly excuses Manson's behavior (particularly since he's had years to seek help for his demons). As Borland said in his statement supporting the women, "sorry to take this to a dark place, but (Manson) is canceled. Goodbye, don’t let the door hit you on the way out." [35]

On March 2, 2022, Manson filed a lawsuit against Wood and Ashley "Illma" Gore for defamation, intentional infliction of emotional distress, violations of the California Comprehensive Computer Data Access and Fraud Act, as well as the impersonation of an FBI agent and falsifying federal documents.[43] In the suit, it is alleged that Wood and Gore spent three years contacting his former girlfriends and provided "checklists and scripts" to prospective accusers in order to corroborate Wood's claims,[44][45] and that the pair impersonated and falsified documents from an FBI agent.[46] The suit additionally claims Gore hacked into Manson's computers and social media, and created fake email accounts to manufacture evidence he had been distributing "illicit pornography".[47] It is also alleged that Gore swatted Manson by calling the FBI claiming to be a friend concerned about an "emergency" at his home. As a result of the call, several police officers were dispatched to his property, where "there was no emergency".[48] He is seeking a jury trial.[49][50]