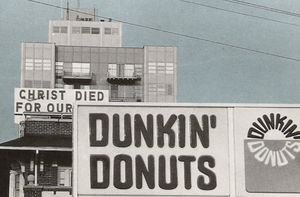 The death and resurrection of Jesus Christ in roughly 30–33 CE is a central part of the New Testament narrative and believed by almost every living Christian. However, evidence for the resurrection is limited, and there are apparent inaccuracies, contradictions, and absurdities that cast significant doubt on the Bible's claims about the resurrection.

Christian scholars and apologists have attempted to use the historical method to argue for the resurrection on the basis of biblical and extrabiblical evidence. According to non-believing scholars like historian Richard Carrier, however, such efforts are often intellectually bankrupt and unresponsive to criticism.[2]

Apparently, without a human sacrifice, an omnipotent God can't (or won't?) forgive the rest of humanity for something they themselves didn't do.

Resurrection is mentioned numerous times throughout the Bible — both the Resurrection of Christ and the resurrection of humankind to face Christ on Judgment Day. For example, Luke 14:14 (NIV) states:

Christians traditionally believe Jesus' slow, tortuous death and/or damnation was to atone for the existent sins of humankind and for the original sin committed by Adam and Eve. As most educated Christians believe the story of Adam and Eve is either a parable or a myth, this translates to atoning for a sinful and imperfect human nature. Since he ends up back in heaven anyway, modern freethinkers wonder where there was any sacrifice.

Those who believe in the literal truth of original sin have no problem in believing that God caused all humanity to be cursed for the sin of two people and then decided to torture himself to make up for it.

There have been alternative viewpoints that Jesus was not crucified or that he survived crucifixion; see Holy Blood, Holy Grail for an example.

Let's assume that Jesus Christ existed as a literal, singular, historical person, and he did everything recorded in the Bible up to that point. Even given all this slack, there are real doubts about the accuracy of the Bible's account. 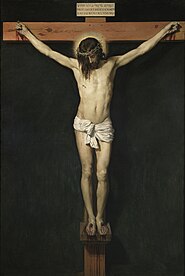 Pretty damn brutal painting of the Crucifixion from 1632.

There are many puzzling details about Jesus' crucifixion. 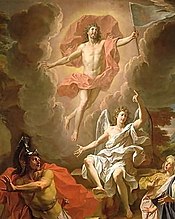 How likely was this resurrection? As an analogy, Richard Carrier wrote:[11]

If the claim were about an alleged resurrection during the mid 20th century people would certainly ask, "Why was this not recorded at the time? Why did newspapers print nothing? Why were there no radio broadcasts about it? Why was nothing shown in cinemas/movie theatres during newsreel?" All of the above would be expected for a major newsworthy event of that time. Even if the promoters of the resurrection concept could provide plausible explanations why everything except the 1980s tracts was hushed up, ordinary people would still be skeptical. Extraordinary claims require extraordinary evidence.

Apologetic arguments for the resurrection[edit]

Apologetic arguments for the resurrection, such as the minimal facts argument, generally focus on the empty tomb and Jesus's later appearances to His followers. Apologists claim that secular explanations do a poor job at explaining how Christians came to believe in an empty tomb and post-resurrection appearances.

Nevertheless, although apologists often insist that Jesus's resurrection is nigh unexplainable without recourse to the miraculous, scholars like atheist historian Richard Carrier have characterized these apologetical attempts as intellectually dishonest and unresponsive to existing responses.[2]

The idea that the tomb of Jesus was empty appears to be be less well-supported than the other leg of the apologists' claim—that Jesus's followers really did experience some sort of appearance, veridical or not. For instance, although Christian scholar and apologist Gary Habermas believes that the empty tomb is well supported as a historical fact, he does not use it as a "minimal fact" because it is less supported by the scholarly consensus.[14] We also don't know for sure where the empty tomb exactly was; Protestants prefer the Garden Tomb

, while Catholics prefer the Holy Sepulchre

Some atheists claim that Jesus's body would have been left out on the cross or buried in a mass grave by the Romans, but this is not borne out by history—there are examples of executed criminals given a proper burial, such as Jehohanan

. Jewish law required executed people to be taken down on the same day (Deuteronomy 21:22-23), so it is plausible that the Sanhedrin, or a member thereof like Joseph of Arimathea, would have helped bury Jesus.[15] However, according to Richard Carrier, since there were special graveyards for the condemned, if Jesus was buried in a private tomb, it would have been only temporary. This means that if He was indeed temporarily buried in Joseph of Arimathea's tomb, Jesus's body could have been taken away from the tomb and reburied prior to the arrival of His disciples three days later.[15]

It is also possible that the story of Joseph of Arimathea is not true at all, potentially meaning that Jesus was never temporarily buried in a identifiable private tomb for the early Christians and their opponents to locate.

According to statistics compiled by Gary Habermas, 75% of Bible scholars believe in the empty tomb. This, however, is flawed—most people who would be interested in becoming Bible scholars are Christians, and some of them are required to sign belief statements in order to be allowed to teach at religious universities; this bias skews measurements of scholarly consensus in the field and also makes consensus a less reliable indicator of truth.[16][17] We need to be extra skeptical of the scholarly consensus of fields that are skewed in this way—the fact that many people say something does not make it true.

Furthermore, Richard Carrier has argued that Habermas's venture commits the fallacy of the excluded middle, as it does not include the vast array of experts who feel that the evidence is not strong enough to go either way. Carrier also claims that Habermas has been untransparent about where he got the data and notes that Habermas appears to have based his number on a survey of writers publishing on the issue rather than all qualified experts; this further skews the data, since the set of experts who publish on an issue might be more passionate about it than the set of all experts qualified to judge the issue. Finally, Habermas's count does not pay attention to the quality of the arguments, but merely the quantity—yet even Habermas himself admits that many of the pro-empty tomb writings are flawed. This weakens Habermas's appeal to consensus, since the consensus might have formed in opposition to reality.[18]

The Gospel of Matthew states that after Jesus's death and burial, the Jewish authorities went to Pilate to ask him to install guards at the tomb, saying they were afraid that Jesus's disciples might steal His body in order to fulfil his prophecy that he would rise on the third day. (Matthew 27:62-66) Then, when the priests learned that Jesus's tomb was empty, they secretly gave money to the guards to bribe them to claim that the disciples stole the body while they were asleep; Matthew finishes by saying that the false accusation of the priests and bribed guards is "commonly reported among the Jews until this day." (Matthew 28:12-15) If this story is indeed true, then it would make it a lot harder for skeptics to propose alternative explanations for the empty tomb, such as that Jesus's body was stolen by an anonymous grave robber, that it was misplaced, that it, as Mary Magdalene seems to have initially thought, was moved to a different location (John 20:13), or that it never existed at all (since the Jewish polemic that claims the body was stolen presupposes the empty tomb.[19])

Even on the surface level, there are many problems with the story of the guards. It never appears in any other canonical gospel, and Matthew's author does not state where he got the information about the priests' secret dealings. It is also absurd for the priests to make the guards claim that it was the disciples who stole the body while they were asleep—how would they have known it was the disciples if they were asleep at the time? It would also have been unlikely for the guards to falsely claim they had fallen asleep, since that could have incurred a death sentence for falling asleep on the job.[19]

Furthermore, the story of the guards makes it seem like the priests understood Jesus's prophecies about his resurrection when the apostles did not, which even Christian apologists like William Lane Craig find questionable.[19]

Finally, Matthew's claim that the Jewish authorities immediately began accusing the Christians of stealing the body does not seem to be borne out by the historical evidence. Grave robbing was a capital crime, so one would expect that if there had been an empty tomb, the Jewish authorities would have tried to get the disciples into deep trouble using an accusation of grave robbery. Yet the book of Acts records no such accusations, even though it records the early Christians being routinely harassed by Jewish and Roman authorities, and the earliest gospel, Mark, does not seem to see the need to respond to any such accusations at all.[20] Richard Carrier argues that this is because the accusations of grave robbery in fact only emerged after Mark made up the story of the empty tomb.[20]

One apologetic argument for the empty tomb is that the early Christians would not have made up women as their witnesses for it, since women's testimony was not as trusted.[14] But as atheist historian Richard Carrier notes, women were in fact trusted in many contexts, and the target audience of early Christianity was not necessarily the entirety of the rather patriarchal society at that time—Christianity initially converted more women than men, and the early church was supported by generous, wealthy female members.[21] Thus, even if it were true that women's testimony was as distrusted as apologists say it was, it is still plausible that believers in a faith that had been lambasting the political and religious establishment from the very beginning might have chosen to not play by the rules of the establishment and make up female witnesses anyway.