Child labour (or child labor) is the situation where children are allowed or required to perform significant amounts of productive labor (what adults call "working for a living") in addition to or instead of receiving an education. It does not typically refer to children helping around the home or performing chores for pocket money, but to labor outside the home. However, in family businesses, particularly in agriculture and hospitality, there is often a grey area with children expected to help out.

In the developed world, it is often relatively benign (excluding child prostitution and trafficking, and less severe problems like children being too tired to study, missing out on extracurricular activities, etc). It is a far more serious problem in poorer countries, where children may be the main breadwinners for their families, forced into dangerous jobs for tiny sums of money, and denied the ability to attend school. Because children who work will tend to be uneducated and unskilled (especially if they're working when other children are at school), the work is often menial manual labour. Throughout the world, some children earn money as actors, models, etc.; this is commonly regulated rather differently than other forms of paid work, but some of the same issues apply.

As with anything else obviously bad, contrarians are queuing up to explain that child labor is actually in the interests of children, their parents, and customers. Their arguments are not terribly persuasive, but tackling poverty is hard, or at least expensive, so instead of raising taxes, why not rely on child workers instead? Especially when their tiny hands make such nice things. 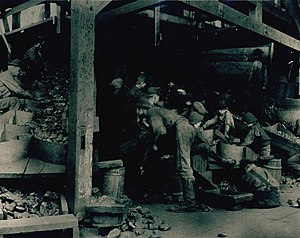 Boys picking slate from coal in the 1880s

In the past, most children received little formal education, and it was expected that they would be earning money from an early age. In England, even when compulsory education was introduced in 1870, most children left school at the age of 10, or younger in areas where children were needed for agricultural work. Their tiny hands are so good for picking fruit.

Child labor is still common in many of the poorer countries of the world. 2012 ILO figures say 168 million children are involved in child labour, with agriculture accounting for 59% of those; in sub-Saharan Africa over 21% of children work.[1]

"Children have worked for millennia, but it is only in the last hundred years or so that this work has been seen as problematic", according to the ILO.[2] Education has long been valued, but it was formerly only for the rich or middle classes. Since the late 19th century, there has been a movement to get children out of work and into education. This is in theory beneficial for the child, who can achieve fuller mental, emotional, and intellectual development, and better life prospects, even if it means parents must support the child for longer and do without the wages the child might earn. In England, the minimum school leaving age increased from an initial 10 in 1870 to 14 in 1921 to 16 in 1972, with debate continuing about whether to extend it further.[3]

Even in wealthy countries, child labor persists. Although much of this is done on weekends, holidays, or after school, it can still have a bad effect on education.[2] In 1998, 9% of American 15-year olds worked in term-time and 18% in the summer[4]; a 1997 study found that 3.6% of American 14- and 15-year olds worked 15 or more hours per week.[5]; in Denmark in 1993, 59% of 15-year olds had some form of employment[6]. There is particular concern about dangerous and exploitative forms of work such as child prostitution, even though the numbers involved are very difficult to quantify.[2]

Campaigners are active in the Third World, and with those people in western countries who buy their cheap goods, and child labor worldwide was reduced by a third between 2000 and 2012.[1]

Is child labor really all that bad? Don't we want to encourage children to be productive members of society? Shouldn't they learn useful workplace skills rather than memorize useless facts, dates, and liberal propaganda?

Indeed, the advantages of child labor have been proposed by some of those on the libertarian right. In particular, for poor children abroad, it's a lot cheaper than aid, and it doesn't involve taxation or restrictions on business. A 2005 study by the Royal Economic Society found that banning the most dangerous forms of child labor, "prostitutes, drug-traffickers, in quarries and mines", was bad because this would drive down wages for other forms of child labor and increase poverty.[7]

Advocates include the economist John Blundell,[8] a mainstay of right-wing think tanks such as the Institute of Economic Affairs.[9]

Most of these arguments are very weak. While child labour could in theory teach children valuable things that they don't learn in school, in practice it often means menial, repetitive labour such as pulling up vegetables or performing simple manufacturing tasks. It very seldom involves initiative, creativity, entrepreneurship, overseas conferences, or any other aspect that right-wing pundits enjoy about their work.

"Aid is famously described as a device by which the poor people in the West fund the rich of the Third World. But free trade in shirts transfers money from the rich of the West to the poor of the East."[8] This shows total ignorance of where most of the money goes from goods manufactured by child labor. If you want to help a child in poverty, give to charity, don't buy the cheapest trainers you can find.

Even non-financial benefits that working for a living might offer, such as discipline and order (which right-wingers always claim children lack), or social interaction with one's peers (often the only thing that makes menial jobs bearable), can be provided in education. Many schools already try to teach subjects relevant to the world of work, such as business studies, commercial art, or office administration, as well as short periods of work experience and supporting entrepreneurship, though much more could be done.

Many of the arguments for lowering price on consumer goods or taxes are short-sighted in nature. It's true that employing children now would temporarily help a country's economy. However, if that employment prevents the children from getting a proper education, that will significantly curtail their potential production as adults. In the long run, a country's economy will prosper more from having properly educated adults capable of doing skilled labor than child laborers who grow up to only be able to do unskilled jobs.

The most serious argument is that it's really expensive to replace the income children would receive: alleviating poverty and providing education are among the best ways to tackle child labor, but are much less cheap than simply throwing a few bosses in jail. Replacing the income of 200 million child workers receiving on average $500 per year[13] would cost $100 bn per year, less than 20% of the US defense budget, but still quite a lot of money.

There are even more issues around various forms of child slavery, included types of bonded labour.[14] In Thailand, girls have been sold into sex slavery by the thousands, sometimes by their own parents.[15] In Mauritanian hereditary slavery, slave children often begin working at the age of five or six.[16] In 1980s Brazil, gatos in the charcoal camps of the Mato Grosso were enslaving whole families, including children, and a number of children died of burns and other accidents. As the result of an anti-slavery campaign, the use of child slavery was greatly reduced, and signs saying "No women or children are allowed to work here" were added to many slave labour camps.[17] In Pakistan, entire families are often enslaved against a debt that is often passed on from one generation to the next, and children as young as six have been seen working with their parents.[18] In India there are a variety of forms of slavery, which often involve children.[19] In India, some child slaves are used to make carpets.[20][21][22][23][24][25][26][27][28][29][30]