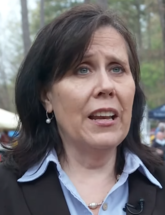 Cynthia Dunbar (1964–) is a graduate of Regent University School of Law and professor of law at Liberty University. In other words, she has a questionable education, and is not one to shy away from displaying her abundant lack of real knowledge or understanding, her anti-science anti-intellectualism, dishonesty, zealous conspiracy theories, general wingnuttery, and ardent support of dominionism.

In 2006 she won the nomination for the Texas Board of Education for District 10, claiming that people voted for her because she supports teaching intelligent design in science classes, and ensured that the wingnut reconstructionist fraction gained a majority on the board—a majority they duly exploited to institute some of the most appalling revisions to education standards in recent times. Dunbar herself is a staunch proponent of homeschooling, and has argued that public education is a "subtly deceptive tool of perversion" and that "the establishment of public schools is unconstitutional and even tyrannical."[1] At least she did her best to ensure that Texas public schools lived up to her descriptions of the public school system during her stint at the education board. She ended her term in 2010, and fortunately the constituency did not elect her handpicked successor, the equally lunatic Brian Russell.

Her book One Nation Under God argues (asserts) that the Christian religion should be more prominent in the public square and championed by the government.

As a member of the Texas State Board of Education, in March of 2010, she proposed and won ratification of a number of modifications to the Texas K-12 social studies curriculum, including the removal of Thomas Jefferson and mention of the Age of Enlightenment (i.e. any implication that reason should be the foundation for authority). A focus on the “significant contributions” of pro-slavery Confederate leaders during the U.S. Civil War was also added. Furthermore, she suggested an amendment to the effect that the anti-communist witch-hunt by Senator Joseph McCarthy in the 1950s may have been justified, and that the separation of church and state is not really a key principle in the Constitution.

Dunbar called these important steps to overturning what she believes is the myth of a separation between church and state in the US. Indeed, Dunbar thinks government should be guided by a “biblical litmus test”, and endorses a system that requires “any person desiring to govern have a sincere knowledge and appreciation for the Word of God in order to rightly govern” (in other words theocracy, Taliban style). Indeed, before the sessions that determined the curriculum for Texas school children she led several prayers, including:

Which isn’t really a prayer, but rather a series of assertions straight out of David Barton.

Dunbar is also a birther who thinks that Barack Obama is, secretly, a Muslim. In 2008 she wrote for the Christian Worldview Network website that a terrorist attack on America during the first six months of an Obama administration would most likely "be a planned effort by those with whom Obama truly sympathizes to take down the America that is threat to tyranny.”[3]

After the Board of Education adventure, Dunbar reemerged as a central proponent of the various Heartbeat Bills that have appeared throughout the US in attempts to circumvent Roe v. Wade. In her address to a rally in Ohio,[4] she said that “94% of the quotes of the Founding Fathers contemporaneous to our nation’s founding came either directly or indirectly from the Bible,” which is another completely reality-independent claim that has also figured in the writings of David Barton. Furthermore, she maintained that legislators shouldn’t worry about passing the unconstitutional Heartbeat Bills since “Roe v. Wade is not law at all.” Therefore, Dunbar concluded:

Which, to emphasize, does not follow even from her ridiculously wrong premises, and must count as not even wrong.