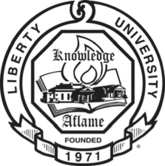 Liberty University is a fundamentalist Christian "university" founded by the late Jerry Falwell. The university was founded as Lynchburg Baptist College in 1971. The name was changed to Liberty Baptist College in 1976 before settling on its current name, Liberty University, in 1984. From the elder Falwell's death in 2007 until 2020, the university was run by his son, Jerry Falwell Jr. The younger Falwell came under increasing scrutiny because of a variety of scandals involving corruption, questionable business deals and a decidedly un-Christian lifestyle,[1][2][3] and resigned in disgrace.[4] Liberty was also the site of a major COVID-19 disease outbreak.

The name is reminiscent of Orwellian doublethink (Ministry of Truth, Ministry of Love, et cetera), since Liberty University students do not have the liberty to attend dances, break curfew, view sexually explicit material, enter the bedroom of someone of the opposite sex, or otherwise exhibit behavior "associated with a counterculture."[note 1] Students may not drink alcohol, or smoke tobacco, or organize petitions without permission, and are also subjected to random, mandatory drug tests. This restrictive code of conduct is aptly called the "Liberty Way".[5] No joke intended. Academic posts are entirely non-tenured so the authorities can control staff as well. Falwell has said, "Where tenure is practiced, eventually theistic evolution is taught."[6] The resulting facepalms could be heard for miles.

To be fair to them, their former name of Lynchburg Baptist College would probably draw unwanted connotations.[7]

Despite their lack of academic credentials, their debate team appears to be one of the highest ranked in the nation. In reality Liberty University notch up points by debating small colleges where they can win. LU rarely debate the tough opponents like Harvard and when they do they tend to lose.[8][9] They sponsor their debate team in order to create the lawyers that they hope will argue against Roe v. Wade.[10]

The seal of Liberty depicts a book with a "tongue of fire" atop it and the motto "Knowledge Aflame." This is either the most unintentionally hilarious image ever, or evidence that they intend on destroying all knowledge they disagree with; skeptics are not allowed close enough with their irony meters to get an accurate reading. Then again, the image of a book on fire does call to mind historical book burnings, so the seal might not be so ironic after all, in a way.

Liberty University has become a $1 billion enterprise chiefly from its profitable online university, which uses high pressure sales to recruit veterans and other vulnerable people.[11] In 2017, Liberty's assets surpassed $2.5 billion, mostly from the expansion of their online empire.[1]

Liberty University offers a wide variety of academic programs and is accredited by the Commission on Colleges of the Southern Association of Colleges and Schools (SACSCOC)[12] to award degrees through the Doctorate level. However, pseudoscience and pseudohistory are thoroughly integrated with legitimate courses of study. For example, a course called "History of Life" presenting Young Earth Creationism as fact is required for all undergraduate students.[13] The course is run by the university's Center for Creation Studies[14] and purports to "draw from science, religion, history, and philosophy in presenting the evidence and arguments for creation and against evolution."[15] The Center for Creation Studies appears to be a business front for pseudoscientist David DeWitt,[16] whose "History of Life Course ePack" is a required text for the course.[17]

Randall Price, head of the university's Center for Judaic Studies, has conducted several expeditions to Turkey to find remnants of Noah's Ark.[18]

In 2005 Liberty University opened a School of Aeronautics that claims to be "the largest faith-based aviation program in North America."[19] It is now entirely possible that the person flying your commercial flight actually believes the Earth is 6,000 years old. Liberty also recycles things on campus, so it is entirely possible that your recycled glass countertop was once a Starbucks bottle held by some perky blonde who actually thinks nationalism is a good idea. Also LU offers an Osteopathic Medical school, with a startup grant provided by the Virginia Tobacco Commission,[20] so it is also possible for your doctor to believe the bible is a literal history book. Thankfully that is very unlikely as they are currently ranked 825th in the nation for a medical education[21] and 508th for research.[22] US News and World Reports ranked it #80 for the Southern region in 2014.[23] This doesn't seem bad until you realize the list ends at 93.[24]

It is often hard to find data on the university since it has traditionally been very secretive. However, according to some detailed data in Smartclass rankings it drastically underperforms the average in retention of students (69%), graduation rates (24%), and post graduation salary (bottom 10% of surveyed). Liberty University's law school ranks among the worst ten in the USA with a quarter of its graduates unemployed.[25] Despite all this, Liberty University is very strict about acceptance (~20% of applying students) and students often rank average in standardized testing scores.

Pensacola Christian College and ICR Graduate school alumnus Pierre Willems earned a Doctor of Education degree (Ed.D) from Liberty University. A Doctor of Education degree is a professional doctorate earned to increase teaching skills or in some cases for teacher licensing.[note 2] The Ed.D has similar requirements as a Doctor of Philosophy which includes a doctoral thesis/dissertation. Ed.D dissertations should include original research and contribution to scholarship. Taking this information into consideration, the dissertation, How Science Teachers Balance Religion And Evolution in the Science Classroom: A Case Study Of Science Classes in a Florida Public School District, has research but there is a very small sample size and the sample size is in the bible belt. This critique mostly attacks the poorly put into place research plan and bias. For example:

Problems get worse considering only three teachers were interviewed and none were non-Christian. The thesis mentions religious beliefs affecting the skills of the teacher, but conveniently ignores Buddhists, Hindus, Pagans, and well...you get the picture. To be fair, getting interviews is not exactly easy but here it goes:

There were three participants in this study from a school district in Florida. It took about one year to get three volunteers who were willing to participate in this study. The first two, Carol and George, taught in two different high schools, and Doug taught in a middle school. Carol, George, and Doug are pseudonyms as per IRB requirements. After each participant description is a list of summary statements produced from each of their answers to the interview questions. This should provide a more in-depth perspective on the way each participant thinks. I emailed each participant the list of summary statements for member-checking, to which all three participants responded positively.[26]

Compounding the problems, Willems is supposed to have a Bachelor's and a Master's degree in Biology but he does not know the difference between Evolution and Abiogenesis. If someone has a legit Biology education then they would not confuse the terms.

The term evolution covers the natural development of life from chemicals to life forms present today on Earth, a process that is believed to have taken billions of years on an Earth with an original atmosphere more reduced than the present atmosphere.[26]

This poorly set up research reflects LU's low educational standards and bias. While this thesis is better the Kent Hovind's "thesis" there is just way too much bias and little data to properly conduct research.

The Pre-Trib Research Center,[note 3] based at Liberty University, "is a 'think tank' committed to the study, proclamation, teaching and defending of the Pretribulational Rapture (pre-70th week of Daniel) and related end-time prophecy."[27] They offer most of their "research" papers online[28][29] and also sell some spiffy DVD sets[30] for completists.

Liberty University is a predominately conservative school, which promotes Republican candidates and adheres to the right wing base of America.

A large number of Liberty University graduates were hired by the George W. Bush administration, especially in the Department of Justice.[32]

Political figures across the political spectrum, including Ted Cruz, Bernie Sanders, Gary Johnson, and Mike "Pray the gay away” Pence, have spoken at Liberty's "Convocation," where students have to attend or they will face a $10 fine. In the crowd at Ted Cruz's speech. you could also see some students wearing Rand Paul shirts.[33]

When the COVID-19 pandemic hit the United States, the virus rapidly spread. While many secular and religious schools (including Pensacola Christian College)[49] did the proper thing and locked down, Liberty, among others, refused to. This led to a group of students filing a lawsuit for refusing to refund money to those who couldn't attend class.[50] Like many institutions in the United States, Liberty did not require staff or students to be vaccinated even after a nationwide vaccine rollout, likely a contributing factor to the outbreak.[51]

In July 2021, a dozen women sued Liberty, claiming that the university created an environment encouraging rape and sexual harassment.[52] The suit claims that the university retaliated against or otherwise downplayed reports by sexual assault victims. The horrifying stories documented in the suit include the story of a fifteen year old girl who was raped at a university-sponsored "summer camp" and subjected to humiliating treatment and threats of violating the "Liberty Way," the university's so-called code of conduct. The university is accused of repeatedly using the honor code to silence sexual assault victims. In another case, the victim, a Liberty employee, was told after reporting a sexual assault that the accused was a "man of God" and she was trying to "smear" his reputation; she was subsequently denied promotions and was later fired by the university.[53][54][55][56] Unfortunately, campus rape is a major problem in the United States, and this is a prime example of the all-too-common downplaying of the issue by educational institutions.