From RationalWiki
(Redirected from Electricity)
Jump to: navigation, search

Do not try to put a four-tined fork into a three-holed socket.

Electricity is the reason you shouldn't jab a fork into the little holes in your wall. It's responsible for lots of lovely things like television, video games, the internet, practical jokes, and illuminated depictions of Santa Claus clutching his bulging sack. But as if that isn't enough, a lot of people have tried to apply electricity to the human body in order to cure things, a practice called electrotherapy. And there are also health risks associated with electric power and transmission, both real and imaginary.

In the early 20th century, electricity really took off with the advent of large-scale power generation. Thomas Edison and Nikola Tesla fought the War of Currents

now has its proponents. 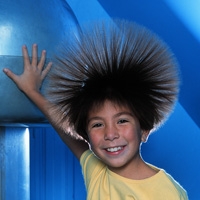 The Van de Graaff generator was invented in 1929 for the purpose of making schoolchildren's hair stand on end. It also inspired the most pretentious rock group in the history of the universe, who couldn't even spell their own name.

Electric death rays have long been an important part of science fiction: Edwin R. Scott claimed to have invented one in 1923, and Tesla was a famous advocate.[1] Other fictional uses include Mary Shelley's Frankenstein revivifying corpses; this was based on the experiments of Volta and others. Kirlian photography makes pretty patterns on photographic plates that have no metaphysical significance. Ionocraft are electrically-powered antigravity devices that work on a science-fair level but don't actually power UFOs. Joe Newman claims to have produced an electric free energy device.

Long thought to be fictional, electric cars have recently become mainstream, although some people object that they're unsuitable for use in allegorical road movies or trans-continental motor races where the only rule is there are no rules. But how often are you going to do that? 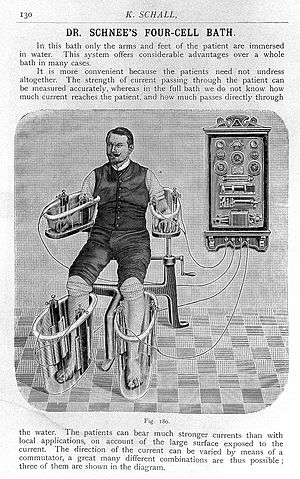 Electricity has been used for dubious medical purposes since the 19th century, when "galvanism" was believed to cure a wide variety of ailments, from headaches to cancer.[2][3]

was a high voltage source used to treat various disorders. It is related to the violet wand

Electrified atomic iodine does nothing.

In the beauty industry, electrotherapy is known by various names such as Faradic treatment, desincrustation, iontophoresis, and microcurrent treatments (MENS). These therapies are generally supposed to improve the appearance of the skin: cleansing, removing wrinkles, for muscle toning, and as "non-surgical facelifts".[4]

One of the few therapies involving electricity that actually does work is electroconvulsive therapy for major depressive disorder, although it's widely dismissed as horrendous cruelty by popular media.

Electric Universe theories hold that everything is electricity or electromagnetism.

Like fire or love, electricity has risks. That's not just electrocution (switch off power at the mains and thwack with a wooden stick till they let go of the wire) or electrical fires (class E: use carbon dioxide extinguishers unless it's a lithium battery in which case run like fuck). Electricity also has made up dangers.

See the main article on this topic: Electromagnetic hypersensitivity

Some studies have shown a weak link with leukemia in children but no evidence of health risks to adults.[6][7] The World Health Organisation does not classify EMFs as a carcinogen and there is no known mechanism that would allow them to cause cancer, but despite the lack of evidence, there are many devices which promise to save you from the evils of EMF.[8]

Power lines may also screw up your wifi.[9]

Microwave ovens, wifi and cellphones are all sources of microwave electromagnetic radiation, a danger which woo purveyors often worry about. It's unclear what the health effects are of exposure to radiation from your neighbour's electrotherapy miracle device. (Probably nil.)

SafeSpace sells a wide variety of products "for clearing and protecting the earth energy around your home or office".[10] Their US$299 EMF Adapter plugs into your building's electrical circuits and provides a "corrective, harmonizing resonance signal".[11] Total EMF Shield, a "EMF Home & Business Protection Device" costing just US$325, is another example. "Total Shield is composed of two separate electronic generators. One generator is a detector device that identifies the frequencies of the geomagnetic disturbances and grid lines from the environment and broadcasts them back out through a Tesla coil, which cancels out the disturbance. The other generator is a 7.83 frequency generator, which duplicates the Schumann resonance (the resonant frequency of the Earth's magnetic field)."[12]

Woo energy is the energy generated from rubbing two woos together.