Arthropleura was a gigantic species of bug, related to centipedes and millipedes, that lived during the Carboniferous period.[1] Despite the fact that they were herbivores, they had very nasty mandibles, and were generally badass bugs.[2]. How big were they, you may wonder? About three meters at maximum size.[3][4] They became extinct partly because of climate change — when the amount of oxygen in the atmosphere lowered, they died due to not being able to intake enough oxygen.

How to squish an Arthropelura[edit]

This section contains lib'rul deceits. You have been warned. 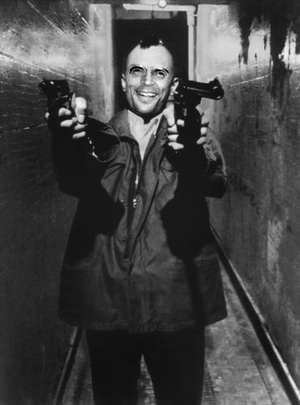 The Andypleura was a highly conservative breed of Arthropleura, descended from the Arthrophyllis, a mortal enemy of the Librapleura, and a close relative to the Arthronpleura, the homosexual cousin to the Andypleura. During its heyday, the Andypleura built huge (albeit weak) nests and feasted on straw men, mistaking the straw man for the real thing. Due to poor taste, they also occasionally nibbled on fruitcakes, though they typically got sick and died afterwards. However, its heyday was destined to be short. After about six thousand years of existence, it died out due to an unwillingness to adapt to gay marriage, a higher CO2 level, and religions other than its own, in addition to simple logic. Its doom was sealed by the fact that, unusually, it was completely unwilling to evolve (calling it 'deceitful' and responsible for one of the largest mass exterminations in Earth's history), resulting in it not adapting even slightly to the changing climate. Its niche was filled by the smaller aSKthropleura. It is widely considered one of the shortest lived genus ever.

Actually, there is much controversy over whether the Andypleura even exists, as it is known from one fossil with questionable dates.

Arthropleura were very, very big, had nasty mandibles, were very fast, and most likely had hard shells. Don't fuck with them.

Arthropleura evolved from crustacean-like ancestors in the Carboniferous period, and was able to grow to such absurd sizes because of the high percentage of oxygen in the atmosphere. Generally, arthropods use primitive organs in their skin called spiracles to diffuse oxygen from the atmosphere into their bloodstream. Unusually, no imprints of spiracles have been discovered, meaning that it could have breathed through lungs (unlikely), or specialized gills (more likely).

Most likely, Arthropleura ate tiny organisms in the decaying matter of the forest floor.[9] However, this remains uncertain, as no mouthparts have ever been found in fossils.[10]