The Gaia hypothesis is the idea that the Earth's biosphere acts to maintain a homeostasis of the planet's physical conditions (for example, atmospheric composition and temperature). Because of the teleological nature of the theory and the tendency of some of its proponents to dress their beliefs up in scientific jargon, it is typically classified as a failed hypothesis at best, pseudoscience at worst. It is known to its adherents as the "Gaia Theory" or even "Gaian Science". They assert that the physical components and systems of the Earth itself are linked together in a system that allows the Earth to maintain a "preferred" homeostasis.

Originally proposed by Dr. James Lovelock (1919–2022), it was given the name of Gaia after the Greek word for "Earth."[1] Believers in this hypothesis are, therefore, called "Gaianists." Lovelock asserted that the biosphere and the physical components of the Earth (atmosphere, cryosphere, hydrosphere, and lithosphere) are closely integrated to form a complex interacting system that maintains the climatic and biogeochemical conditions on Earth in a preferred homeostasis. He claims that, because of this complex system, the Earth reacts to change in a manner similar to a living organism.[2]

The "Gaia hypothesis" also shows up in a lot of anti-environmentalist writings which basically conflate all environmentalists with Gaianists and portray it as a secular religion, despite how fringe the hypothesis is today. In fact, when pundits/politicians even bring it up today it's much more likely because a wingnut is ranting against it than because someone is actually adhering to the hypothesis.

The most-used example of the hypothesis is as an explanation of the historical climate shifts of the Earth. It proposes that the biological makeup of Earth's population has changed relative to the brightness and heat of the Sun. The younger, cooler Earth had a heavily carbon-based atmosphere, which produced a warming greenhouse effect, but as the Sun grew brighter, the excess carbon dioxide was converted to massive amounts of vegetation across the globe (what is known as the Carboniferous epoch). This plant matter then was buried through geological processes, creating the quantities of oil and coal found underground. The sequestration of this carbon cooled the Earth.

In the modern era, these stockpiles of carbon have been released by human actions, reigniting the greenhouse effect, warming the Earth again, and disrupting the "preferred equilibrium". The Gaiasphere's reaction, according to one stupid movie hypothesis, will be the stoppage of the Gulf Stream, causing considerable cooling of the North Atlantic and mainland Europe. The resultant ice age should increase Earth's albedo (brightness), thereby reflecting more solar energy and causing worldwide cooling and, thus, the balance would be restored.[3]

The main problem with the above scenario is the lack of any known (or even proposed) mechanism by which biological change could be directed in order to achieve a particular result. Granted, Earth is an incredibly complex mess of interconnected systems, but the equilibrium they achieve is in no way deliberate. When something disrupts the balance (and, really, it's always in slight flux), things change, and a new balance is achieved. The system only looks tuned for life because we're a product of said system.[4]

Complex systems routinely involve negative feedback loops that maintain equilibrium in the system, resembling homeostasis, without any directing force being necessary.[note 1] To this extent, the Gaia hypothesis does not offer anything new; the idea that the biosphere is composed of highly interconnected, interdependent, and non-isolable systems, operating in dynamic equilibrium, is non-controversial in the hard science (as opposed to the woo) of ecology. 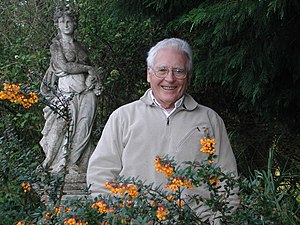 To go some way towards countering criticism of his first book's[1] lack of a plausible mechanism, Lovelock has proposed the model of Daisyworld,[5] a simplified ecosystem made up of only two elements: black daisies which absorb light and heat their environment and white daisies that reflect light and cool their environment. At higher temperatures, black daisies suffer from the heat and are impaired until they eventually die. Similarly, white daisies cannot cope with low temperatures. With a heat and light input that starts weak and then steadily becomes stronger, this planet tends towards an equilibrium temperature, and the varying proportion of black to white daisies will maintain the planet at that equilibrium temperature. This is in contrast to a bare gray planet, whose temperature would steadily rise with the increased input of heat and light. The model remains valid even with many modifications (daisy-consuming rabbits; meteor strikes killing most of the daisies, "cheat" grey daisies which produce no pigment and have a higher rate of growth and reproduction) However, Lovelock intended Daisyworld as a starting point. It provides a model of how a Gaian system might work. It does not prove that the Earth functions as a Gaian system and does not fully address the assertion that the emergence of a Gaian system is incompatible with current views on evolution. Gaia's advocates are engaged in asking "How do results from Daisyworld transfer to the real world?".

Dr. W. Ford Doolittle is one of the most well-known critics of the Gaia hypothesis. In 1981, he wrote an article for CoEvolution Quarterly titled "Is Nature Motherly?" in which he conjectured that there is nothing in the genome of organic life which could provide the feedback mechanisms the Gaia hypothesis proposes, and that, therefore, the Gaia hypothesis was an unscientific theory without any explanatory mechanism, in violation of the scientific method. Richard Dawkins, in his book The Extended Phenotype, wrote in affirmation of Doolittle's critique of the hypothesis, arguing that organisms cannot act in a concerted effort, as it would require foresight and planning from them on a global scale.[6]

Dr. James Kirchner criticized the hypothesis for its imprecision, asserting that Lovelock had not presented one particular theory but rather four separate, but closely linked, hypotheses:

In Joseph Lawrence's book, Gaia: The Growth of an Idea, Lawrence argued that Kirchner's attacks were principally against Lovelock's integrity and not against the hypothesis itself.[7] Lovelock did not attack Kirchner's views until his autobiography Homage to Gaia, in which he dismissed Kirchner's position as sophistry.[8] Lovelock, however, did attempt to disprove the claim that the theory is not scientific because it is impossible to test it by researching and developing a controlled experiment, i.e., it is not falsifiable.

Lovelock was also careful to present a version of the Gaia hypothesis which had no claim that the Earth's biological systems intentionally or consciously maintained the complex balance in the environment that life needed to survive. Instead, it appears that the claim that Earth acts intentionally was a metaphoric statement and was not meant to be taken literally. This restatement of the Gaia hypothesis was more acceptable to the scientific community, although, at this point, pretty much devoid of meaning.

Most of the systems used as examples or explanations to support this "hypothesis" make no sense in regard to the reality of how life has evolved and the environment has changed.

While life on Earth, among other factors, certainly alters the environment, the life that then is seen thriving evolved and adapted to do so. Thus, there is no magical mechanism that endlessly returns conditions to some "ideal" balance. This is easiest to see over longer terms — before plants started photosynthesizing, there was no free oxygen in the atmosphere — and when they did, there was a mass extinction of creatures to whom it was poisonous; this was known as the Great Oxygenation Event.

Therefore, many forms of life that survive in some niches can either be wiped out - or become much more successful - due to "life-made" or geologic or astrophysical changes to the environment.

Stephen Jay Gould criticized (and other scientists still criticize) the Gaia hypothesis as merely an attempt to re-explain processes already explained by evolution, natural selection, and adaptation. Gould said that, in order for the hypothesis to hold, either of the following would have to be the case:

Gould then went further to dismiss it as "merely a metaphor for naturally occurring processes" (referring to evolution).[9]

Also, according to most scientific critics, especially Dawkins[10] and Ford Doolittle, the Gaia hypothesis requires an ecological foresight and teleologism to be true, concepts that are not scientifically viable, and are considered about as scientific as intelligent design.

Because of its inability to address the aforementioned enduring science against its claims, the Gaia hypothesis is regarded within the scientific community accordingly: as a hypothesis (and probably a failed one at that), and not as a fact, theory, or law. This contrasts with proponents of the concept, who have been known to call the hypothesis a "theory", even though it is antithetical to scientific terminology and is regarded by scientists as promoting pseudoscience.