The Protocols of the Learned Elders of Zion

From RationalWiki
(Redirected from Protocols of the Elders of Zion)
Jump to: navigation, search 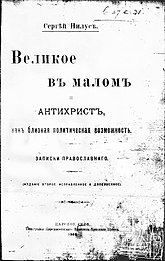 The Protocols of the Learned Elders of Zion is a fabricated booklet written by Mathieu Golovinski, a French-Russian Okhrana operative. It purports to detail the agenda for a Jewish conspiracy to take over the world, including how to control the media, the banks, and the government. The Protocols have been the basis for innumerable anti-Semitic tracts throughout the 20th and 21st centuries, most notably Henry Ford's The International Jew and Adolf Hitler's Mein Kampf. The Nazis heavily promoted the booklet to justify oppression of the Jews and the Holocaust, and paradoxically acted much like the Jews depicted in Protocols in plotting and enacting the exploitation and abuse of nearly anyone not a German in good standing -- except with even more brutality.

Despite being shown to be a hoax as far back as 1921,[1][2] it is still distributed and believed by people who swallow whatever fiction fits with their racist views.[3] In addition to its exposure as a fabrication (by journalist Philip Perceval Graves of The Times) in 1921, a pamphlet containing three essays by Lucien Wolf called The Myth of the Jewish Menace in World Affairs debunking the Protocols was released in the same year.[4] A Swiss judge ruled the pamphlet to be a forgery in a 1935 decision in a case known as the Berne trial.[5]

The text of the book that now circulates was originally plagiaristically cobbled together from three sources:[6]:97[7]:47,114

Anti-Semitic groups have been pushing the book, and it is still in print, even promoted by such conspiracy-minded folks as Texe Marrs,[9] and (until his imprisonment) Kent Hovind.[10]

On his album Extremist Won, Carl Klang (1953-2019), self-described as "America’s #1 Patriotic Singer", recorded the song "The News Behind the News" which deals with the Protocols, calling them "the blueprint to the downfall of our nation".[note 1]

David "Thelizardsdidit" Icke (described as a "fucking loon" by Cracked)[11] "declared that the Protocols of Zion is evidence not of a Jewish plot, but of a reptilian plot of Illuminati lizards", according to Jon Ronson, writing in The Grauniad.[12]

The Protocols are also regularly used as evidence of a Jewish conspiracy in the Islamic world: Hamas, for example, cites the text in its charter.[13]

It has three and a half out of five stars on Amazon,[14] which all most sane people would regard as 3.5 stars too many.[note 2]

The last completed work of Will Eisner (1917-2005) was The Plot: The Secret History of the Protocols of the Elders of Zion. Told in comic strip format, it details the origins and promotion of the forgery.[15]