Israel Shamir, born Izrail Schmerler and known by the pseudonyms Jöran Jermas, Adam Ermash, Vassili Krasevsky, and Robert David, is a blogger involved with the leftist website CounterPunch and the activist group WikiLeaks. Shamir is presumably hawked by left-wing activists for his work with WikiLeaks and his commentary on the Israeli-Palestinian land dispute, and not for his promotion of Anti-Semitism and Holocaust denial, or his praise of the Khmer Rouge. In 2010, the progressive blogosphere uncritically repeated Shamir's conspiracy theory that one of Julian Assange's Swedish rape accusers was a CIA plant. Since that time, WikiLeaks and Assange's supporters have become very defensive whenever Shamir is brought up.

Ironically enough, Shamir claims to be an Israeli Jew. He claims to have been born in Siberia to Jewish parents, and claims to have emigrated to Israel in 1969, served as a paratrooper in the Israel Defence Force, and fought in the Yom Kippur War. He also claims to have studied law at the Hebrew University of Jerusalem, and to have dropped out of his law studied to pursue a career in journalism. He claims to have worked for the BBC, Israel Radio, the Israeli newspapers Maariv and Haaretz, and the Soviet propaganda organ Pravda.[1] Shamir emigrated to Sweden in 1984, and claims to divide his time between between Sweden, Israel, and Russia. He also claims to have a residence in Jaffa. We keep saying "claims" because there are significant holes in Shamir's life story,[2] enough for pro-Palestinian commentator Norman Finkelstein to declare that Shamir "invented his entire personal history. Nothing he says about himself is true."[3] According to Shamir's account, he converted from Judaism to Orthodox Christianity in 2004.

According to Shamir, the Jews are to blame for pretty much everything. He claims that the reason the mainstream press often takes sides with Israel is because the "rich Jews buy media so it will cover up their (and their brethren's) misdeeds. The Jews in the media are giving protection to the rich Jews. ... In the US, even in Western Europe, no view can be proposed to the general public unless approved (after being vetted and corrected) by a Jewish group."[4] He believes that there exists a vast Jewish conspiracy pushing for global hegemony, writing that, "Palestine is not the ultimate goal of the Jews; the world is. Palestine is just the place for world state headquarters; necessary, for otherwise the people of Europe wouldn't be magnetised like a rabbit in the headlights of a car."[5] A Russian-language book by Shamir, published in 2010, hawked The Protocols of the Learned Elders of Zion.

Shamir has written in defense of the Holocaust-denying pseudo-historian David Irving, saying that he was persecuted for his "denial of Jewish superiority", adding that, "Not only is Western Christian civilisation dead, but even its successor, secular European civilisation, has met its demise only a few days after its proud and last celebration by the Danish scribes. It was short-lived: about two hundred years from beginning to the end, the Europeans may once have had the illusion that they can live without an ideological supremacy. Now this illusion is over; and the Jews came in the stead of the old and tired See of St Peter to rule over the minds and souls of Europeans."[6]

Shamir was also booked as a speaker at the International Conference to Review the Global Vision of the Holocaust, the infamous Tehran gathering of anti-Semites and Holocaust deniers convened by Mahmoud Ahmadinejad's government in 2006. He shared the stage with Horst Mahler, a Neo-Nazi lawyer from Germany.[7] Shamir later spoke glowingly of the conference, saying that, "Nobody – and I do mean nobody, including British, French, American, German, Russian leaders – really cares about the victims of a war long past, Jewish or otherwise; they pay tribute to the Holocaust as nations pay tribute to their vanquisher." He also wrote that the official narrative of the Holocaust serves as "a justification of [rich and powerful] minority rights over [oppressed] majority needs."[8] In a 2011 interview the Jewish Tablet magazine, Shamir repeatedly refused to acknowledge the atrocities committed at Auschwitz.[9] Elsewhere, he has described Auschwitz as "an internment facility, attended by the Red Cross."

Katha Pollitt from The Nation describes a visit to Shamir's website thusly:

"I spent a few hours on www.israelshamir.net and learned that: 'the Jews' foisted capitalism, advertising and consumerism on harmonious and modest Christian Europe; were behind Stalin's famine in Ukraine; control the banks, the media and many governments; and that 'Palestine is not the ultimate goal of the Jews; the world is.' There are numerous guest articles by Holocaust deniers, aka 'historical revisionists.'"[10]

Even though he has stated that the Jews are a "virus in human form" and that "it's every Muslim and Christian's duty to deny the Holocaust"[11], Shamir insists that he is not Anti-Semitic or a Holocaust denier. When both the British newspaper The Guardian and the Swedish tabloid Expressen made light of Shamir's history of ramblings about Jews, he said that the stories were "all lies. And all these lies are old and well-known and refuted years ago." Splitting hairs, he later stated that he does not deny the Holocaust per se, but opposes it as a cultural element of modern Jewish identity that purportedly promotes "the Jewish claim of superiority and exclusivity."

In September 2012, the British socialist newspaper Morning Star posted a column by Shamir claiming that the international outrage over the Russian government's treatment of Pussy Riot was a "weapon against Putin" engineered by "oligarchs, big business, the media lords, the pro-Western intelligentsia of Moscow, and Western interests which naturally prefer Russia divided against itself." The Morning Star retracted the article hours later, saying that it has been reprinted from CounterPunch "in good faith without knowledge of the author's background." Anti-fascist blogger Jim Denham noted that Shamir's original CounterPunch article contained a sentence — absent from the Morning Star — stating that, "Western governments call for more freedom for the anti-Christian Russians, while denying it for holocaust revisionists in their midst." Shamir himself later accused the Morning Star of caving in to "the pressure of the Jewish lobby."[12]

Also in September, Shamir wrote a column defending Pol Pot and the Khmer Rouge regime, writing that, "The Pol Pot the Cambodians remember was not a tyrant, but a great patriot and nationalist, a lover of native culture and native way of life." He further claimed that, "As for the mass killings, these are just horror stories, averred my Cambodian interlocutors."[13] The Phnom Penh Post sarcastically replied, "We must admit we were swayed when Shamir provided conclusive proof that the KR genocides were either inept or out-and-out fabrications: he alerted us to the fact that the population of Cambodia has doubled since 1970. We eagerly await his next Counterpunch article, 'Population of Europe has increased by a factor of six since 1939, therefore World War II never happened.'"[14] 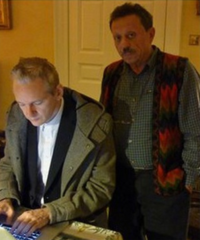 Assange and Shamir, in a photo published in 2011.

WikiLeaks spokesman Kristinn Hrafnsson confirmed in a Swedish radio interview that Shamir works with the group, along with "a lot of journalists that are working with us all around the world" who "have different roles in working on [the] project." [15] Shamir describes himself as an "accredited" freelancer for WikiLeaks, distributing the group's batch of leaked U.S. cables to Russian news organizations. Daniel Domscheit-Berg, a dissident former member of WikiLeaks, cited Shamir's involvement as one of the reasons he left the group; he described Shamir as a "famous Holocaust denier and anti-Semite" and claimed that Julian Assange wanted him to contribute under a pseudonym as to avoid "unwarranted attention." Shamir's son, a journalist named Johannes Wahlström — who himself has been accused of Anti-Semitism — is one of WikiLeaks' spokespersons in Sweden, producing a documentary on the group that aired on Swedish public television.[16][17]

Naturally, Shamir has backed Assange in his extradition dispute with the British and Swedish governments. In September 2010, he co-authored an article on CounterPunch suggesting that one of the Swedish women who had accused Assange of rape was involved in a CIA plot to frame him for the alleged crime.[18] Despite Shamir's background, and the fact that his story couldn't hold up to plausibility[19], the article was held up by the likes of Keith Olbermann[20], Bianca Jagger, and the liberal blog FireDogLake[21] as proof that the U.S. was trying to extradite Assange from Britain through Sweden. It was only after the story shot through the Internet like a bullet and potentially libelled the accuser that anybody bothered to look into who had written it. Once information about Shamir's Jewish obsession came out, Olbermann sheepishly tweeted, "If the author of that article is a holocaust denier, I repudiate him and what he wrote, and apologize for retweeting the link."

Despite his work with WikiLeaks and his reportedly-close friendship with Assange, it appears that Shamir has done more harm for the group than good — and not just with his Anti-Semitic polemics. Russian journalists have accused Shamir of fabricating some of the cables he distributed in order to cast Mahmoud Ahmadinejad in a sympathetic light. Others have accused Shamir of passing along sensitive cables to the dictatorial government of Belarus, potentially endangering opposition activists there.[22] Assange reportedly refused to investigate the matter, though a WikiLeaks spokesman said that Shamir's actions were "obviously unapproved." Blogger Richard Bartholomew has noted that Shamir's aforementioned rants against Pussy Riot stand in stark contrast to Assange's stated support for Pussy Riot.

Of course, other Anti-Semites and Holocaust deniers have leapt to Shamir's defense in times of need. Gilad Atzmon, a saxophonist and extreme Anti-Israeli activist, defended Shamir in a letter to the London Times, writing, "I would argue that Shamir’s exposure of some unacceptable Jewish religious perceptions is enormously important. I would argue as well that Jewish people would be the first to benefit from listening and reading Shamir." Also defending Shamir is Bishop Atallah Hanna, an Orthodox priest who apparently presided over Shamir's baptism and who once voiced support for Palestinian suicide bombings.[23]