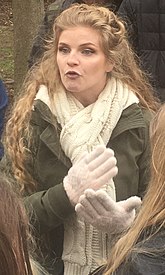 Bennett was born and raised in Zanesville, Ohio, in a Republican household.[4] She majored in biology at Kent State, graduating in 2018. Besides her studies, she was also a conservative/"libertarian" activist on the campus.

In 2017, she was the president of the Kent State's chapter of Turning Point USA (TPUSA),[5] when the chapter protested against safe spaces by wearing diapers. This event later became mocked on social media, such as Twitter and Reddit, as "wearing diapers to own the libs." The ensuing fallout resulted in the Kent State chapter of TPUSA disbanding, and Bennett resigning from the organization, posting a goodbye letter online in which she brands the organization a "shithole", in an attempt to cover up her affiliation with the organization.[6] Since then, she has been affiliated with Liberty Hangout,[7] a libertarian YouTube channel that seeks to promote pseudo-economics[8] and be a copycat of Infowars.[9]

However, her real claim to prominence came in May 2018, when she posed at the graduation ceremony with an AR-10 rifle on the campus of Kent State University (where 48 years earlier, 4 students were killed by the Ohio National Guard).

Now that I graduated from @KentState, I can finally arm myself on campus. I should have been able to do so as a student — especially since 4 unarmed students were shot and killed by the government on this campus. #CampusCarryNow[10]

Her own statement on the Kent State shootings:

I believe not only that those four students would still be alive today had they had the right to carry on campus, but that students today would be much safer.[11]

Her statement later earned her an appearance on Fox & Friends.[12]

Following her segment on Fox, journalist Caleb Ecarma noted that Bennett liked a Facebook post by a white supremacist that advocated the genocide of minority groups.[13]

She has a very libertarian view on gun rights:

I believe that if the government has it, we should have it. Machine guns — any weaponry. To make sure the government can't go against the citizens. We should be able to protect ourselves against a tyrannical government.

However, between defending gun rights, she has also attacked David Hogg, a survivor of the Parkland shooting:

.@davidhogg111 I don't know if your tiny arms with Hitler-esque bands around them can't reach your @ button, but maybe instead of retweeting racist posts about me, you can have a real conversation about guns with me like the adult you want to be. #CampusCarryNow[14]

Later, she challenged David Hogg to an arm-wrestling match:

When Hogg didn't respond, she referred to him as "twig arms".[16]

When Hogg was awarded the Robert F. Kennedy Human Rights Award, she disapproved of it on Twitter:

Why is @davidhogg111 receiving a human rights award in Washington DC when he's actively trying to strip us of our human rights? When will we stop rewarding people for supporting violent government policies? #GunControlKills

In July 2018, she also visited New York City, but didn't seem to like it, not just for its gun control laws:

The only reason I'm smiling in this photo is because it was the only spot in NYC I couldn't smell piss or see trash on the ground.[17]

In January 2019, she voiced no sympathy for unpaid non-essential government workers during the government shutdown. She can apparently rail against taxation and also talk about "real" jobs in the same breath, as working and being taxed for work is usually a very obvious indicator it's a real job.

I really don't care that government employees aren't getting their paychecks, and neither should you. Taxation is theft. Get a real job! #GovernmentShutdown [18]

Bennett is commonly associated with Liberty Hangout. It describes itself as a "libertarian media outlet" which promotes the messages of peace, prosperity, and property rights." Despite this assertion of self-description, Liberty Hangout has made many statements which are quite frankly contradictory. These statements are frequently criticized for their authoritarian and bigoted nature. Liberty Hangout has also frequently retweeted and pinned hatred from other people like Donald Trump and Jon Miller.

Support for monarchism and feudalism[edit]

It is far more preferable to live under a monarchy than a democracy. Democracy is mob rule of the government estate and is a soft form of communism. According to a 2018 study at the Wharton School at UPenn, monarchies "are better at protecting property rights and checking abuses of power by elected officials; and they have higher per-capita national incomes" than democracies.[19]

Donald Trump should declare himself a monarch & leave the presidency to his son when he retires. It's the only way to prevent Democrats from having permanent control of Washington & ensuring rightwing values cease to exist. You'll never be able to vote for conservative ideas soon[.][20]

I'd rather live under a Catholic monarchy than a liberal democracy[.][21]

If monarchy is bad because a king will plunder his citizens, then democracy is 300 million times worse since that's how many people get to act as kings and vote to plunder you of your wealth, your property, and your rights.[22]

There's nothing wrong with feudalism[.][23]

The non-aggression principle is for intellectual midgets. You can't reduce a legal system and conflict resolution down to one single, inconsistent principle. Libertarians that actually think so live in fantasy land.[24]

Honestly, the only reason I still call myself a libertarian is because it makes other libertarians mad.[25]

Libertarians will hate to hear this, but anarcho-capitalism would look a lot like medieval feudalism and create MORE borders and many micro-monarchies. You're not a real libertarian if you support open borders and democracy.[26]

Sadly, the overwhelming amount of violent crime in our major cities is committed by blacks and hispanics-a tough subject-must be discussed.[27]

A man named Bong Joon Ho wins #Oscar for best original screenplay over Once Upon a Time in Hollywood and 1917. Acceptance speech was: “GREAT HONOR. THANK YOU.” Then he proceeds to give the rest of his speech in Korean. These people are the destruction of America.[28]

English should be the official language of the USA. It's not right to force Americans to assimilate to the demands of invaders. Anyone who comes to this country should have to assimilate to OUR culture.[29]

At least one good thing has come out of all this [in reference to the San Francisco pride festival being cancelled because of COVID-19].[31]

Honestly, letting women vote in this country wasn't one of the best ideas. Females vote with emotion and overwhelmingly support Democratic feel-good policies that take away our ACTUAL rights. I'd rather lose my "right" to vote than lose my right to defend myself with a firearm![32]

Democrats are notorious for making fake rape allegations and fake hate crimes against themselves in order to discredit their opposition. Why is it out of question to believe yesterday's bomb threats against top Democrats were also faked to discredit those who stand in their way?[33]

Soon there will be more people on the #ClintonBodyCount than the number of electoral votes she got in 2016. You can kill all the witnesses to your crimes, but you'll still never be president, Hillary. #EpsteinSuicide[34]

Obama not endorsing his own VP @JoeBiden for President tells us one of two things. Either Hillary is going to run again, or he knows something about Joe is going to come out that will completely derail his campaign. Either way, an easy win for @realDonaldTrump[35]

Even though Kathy has been told by numerous people that @KaitMarieox does not run this account (and we have stated this in multiple tweets), she keeps going around saying she does. Kathy is so jealous over anyone more successful than her that she has to lie about them.[36]

Mitt Romney should be deported[.][37]