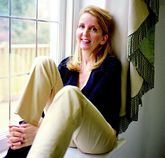 Gillian McKeith (or, to give her her full medical title, Gillian McKeith) is known in Britain as a television "expert for hire," peddler of food woo, and, of course, as "the awful poo lady,"[1] originator (or almost) of the modern art of copromancy. She is a successful businesswoman who sells her own range of books and health foods, which appear to be the same as any other health foods, but more expensive. Her website sells such snake oil as "24 hour detox" stuff and diet pills.[2] 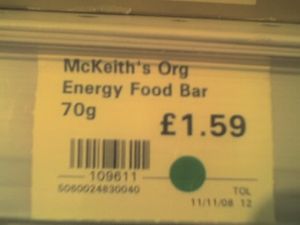 She may have no nutritional qualifications, but she knows business all right. Her branded stuff is easily the most expensive compared to similar items.

She hosted the Channel 4 television series called You are What You Eat, in which she used copromancy (analysing people's faeces) to "diagnose" nutritional imbalances, becoming famous as "the poo lady" on the programme. Most of the program featured her "shouting at sobbing, fat women while forcing them to eat quinoa and undergo frequent sessions of colonic irrigation enthusiastically administered by her good self."[3] Further articles in the Daily Mail (uncharacteristically not toeing the line of the nutritionist) described her techniques, reporting the cases of three women who appeared on the show, indicated more of her fantastic technique and bedside manner: "She gave me a balloon... put two drinking straws underneath it and said, 'That's what you look like!' I ended up in tears."[4]

More recently, she's been repeating her trick of shouting at obese women by trying to "ban big bums" on E4's Supersize vs Superskinny. She also rehashed You Are What You Eat as a competitive show called Three Fat Brides, One Thin Dress.[5]

Gillian McKeith has a "PhD" in holistic nutrition from Clayton College of Natural Health, a non-accredited distance-learning natural health college in Alabama. Her PhD thesis is unavailable from the college, but can be bought as a 48-page book entitled Miracle Superfood: Wild Blue-Green Algae, the nutrient powerhouse that stimulates the immune system, boosts brain power, and guards against disease, which states, among other things, that "Chlorophyll within the algae is a powerful oxygen generator for human beings" and that algae can increase levels of DNA. Oh, and there are recipes and stuff as well. In a thesis.[6] The fact that her thesis contained superscript references and fancy-sounding science words, but on closer inspection referenced poor sources (such as pamphlets and magazine cuttings), as well as its numerous inaccuracies, have led to her leading critic Ben Goldacre describing it as cargo cult science.[7] 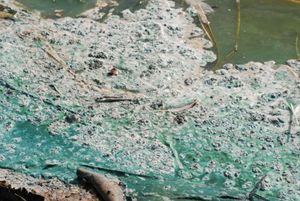 and of course there's no reason to worry about someone with McKeith's sterling qualifications dabbling with selling dietary supplements made from a group of bacteria which can be quite nasty[8][9] - we hope.

So basically, her thesis tries to claim that eating chlorophyll will help provide oxygen to the body. A minor shortcoming is that chlorophyll only generates oxygen in the presence of light, and the human digestive system is not normally a brightly-lit area. Even if you did stick a light in your rectum (or just used the sun shining out of your arse), oxygen is only absorbed through the lungs, not the gut. Indeed, oxygen there is precisely where you do not want it to be, not least because of the flammability of some gases produced by the digestive tract. This second claim has been particularly jumped on by her detractors and critics, as McKeith has claimed that it was a typo or a misquote, even though it appears separately in at least two of her books.

In 2007, she agreed to stop using the title "Doctor" in her advertising, after a complaint made by a regular to the Bad Science forum to the Advertising Standards Authority was upheld.[10]

A senior dietician with the British Dietetic Association said of the advice on her programme: "We are appalled. I think it is obvious she hasn't a clue about nutrition. In fact her advice, if followed to the limit, could be dangerous. Her TV programme takes obese people and puts them on a crash diet that is very hazardous to health."[11]

In July 2010, Ms. McKeith dragged herself back into a world of poo when a random person tweeted at having read Bad Science by Goldacre, and Ms. McKeith (or someone controlling her Twitter) tweeted back calling the book "lies"[13] ...which is not something a UK resident wants to say about another UK resident in a public broadcast context about serious matters of professional truthfulness. Whoever operates Ms. McKeith's Twitter then deleted the tweets and tried to remove links to said Twitter from her official website, but very hamfistedly, and without reckoning on just how many people had screencapped the tweets.[14] Dr. Goldacre was somewhat bemused, and really doesn't want to bring legal action against her, but does quite seriously want her to retract the statement.[15] Jack of Kent stepped up to act for him in a legal capacity;[16] however, not much more happened,[17] and McKeith's post-2010 career was mostly dominated by her 16-day stint on the cringe-fest I'm A Celebrity... Get Me Out of Here.

In early 2014, her official website became unusable (or even offline at times), while her Twitter account[18] was only sparingly active, mostly responding to the occasional fan mail about how much weight people lost on her diets. The website started up again in January 2015.[19]

As of 2021 she appears to advocate for anti-vax, anti-lockdown and other worrying trends. (Are we surpised?)[20] She also seems to be quite right wing, reposting anti-Sadiq Khan messages and retweeting Candace Owens.[21] She's also been getting into cryptocurrency scams - that is, the awful poo lady is pumping a shitcoin.[22]