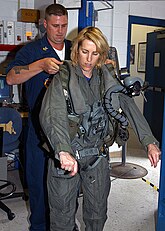 Laura Ingraham (1963–) is an American conservative talk radio host, television personality and Ann Coulter knock-off. During the 1980s, Ingraham was the first female editor of the Dartmouth Review and then a speechwriter in the Reagan administration. During the 1990s, she became a commentator for CBS and MSNBC. She launched her radio show in 2001. She occasionally filled in for Bill O'Reilly and other Fox News hosts.[2] She currently hosts her own Fox News program, The Ingraham Angle.

Ingraham began her career as a pundit at the Dartmouth Review, Dartmouth College's student-run conservative rag. During her stint at the Review, she met and dated fellow wingnut Dinesh D'Souza and helped to out members of the university's gay-straight alliance.[3] Despite her status as a Dartmouth alum, she enjoys railing against "elites" with fancy-pants college degrees.[4]

At the 2016 Republican convention, Ingraham stuck out her right hand in a way that closely resembles a Nazi salute. Her older brother, Curtis Ingraham, publicly accused her of being a nazi-sympathizer, and stated "We grew up with an abusive, alcoholic father who was a Nazi sympathizer. Like father like daughter?! This was the familial soil that gave bloom to my sister's anger."[5]