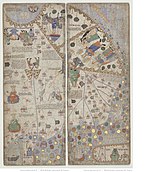 Gog and Magog map from the Catalan Atlas of 1375 CE

Gog and Magog are, respectively, the names of a mysterious Biblical land and its people, who feature in apocalyptic prophecy. They appear in the Book of Ezekiel and the Book of Revelation. They are also mentioned in the Qur'an as Yajuj-Majuj.

Gagmagog was also a legendary giant who appears in British folklore.

The Biblical Gog and Magog[edit]

Ezekiel 38 and 39 continues to speak of Gog, and that Gog (Lydia) together with Persia from the east, Phut from the west, Kushites from the south, and others, like Gomer and the house of Togarmah from the north, whose identities at this remove are even harder to identify. We are told that Gog dwelt north of Israel, but apart from this direction, there is little else to identify Gog in the passage. Gog and his allies are to be defeated in a mighty bloodbath; according to chapter 39, it will take seven months to bury all the dead.

Gog reappears in Revelation 20:7-8, which says:

And when the thousand years are expired, Satan shall be loosed out of his prison, and shall go out to deceive the nations which are in the four quarters of the earth, Gog, and Magog, to gather them together to battle: the number of whom is as the sand of the sea.

Here Gog is identified as the land in the four corners of the earth and Gog's attack here is represented as an eschatological event that will occur after the Millennium, and that will be vanquished by divine intervention.

The term "Gog Magog" or "Gogmagog" is simply a clarification which may be understood as "Gog as in those from Gog" and despite apocalyptic attempts to devise scenarios whereby nations associated with Magog will one day attack Israel, Magog is not implied in the literal readings of the biblical texts occurring as nothing more than a reference for which Gog is being mentioned.

The origin of Gog's name remains mysterious. Many Bible scholars believe that Gyges

(Greek Γυγες), king of Lydia (687-652 BCE), is meant; in Assyrian letters, Gyges appears as Gu-gu; in which case Magog (literally "from Gog") might be his territory in Anatolia. Josephus identifies Magog with Scythians, but this name was used generally in antiquity for any peoples north of the Black Sea.[1]

According to a tradition of dispensationalist Biblical hermeneutics, Gog and Magog are supposed to represent Russia. The Scofield Reference Bible's notes to Ezekiel claim that "Meshech" is a Hebrew form of Moscow, and that "Tubal" represents the minor Russian city of Tobolsk. Of course, the Biblical references to Magog were written over a thousand years before the first historical reference to Moscow, but who needs evidence when you can shoehorn a modern place into an ancient document based on the names sounding similar in a third language?

This identification of Gog with Russia, and Cold War tensions with the West and with Israel, led Hal Lindsey to claim that the former Soviet Union would play a major role in end times prophecies. A chapter of his The Late Great Planet Earth bears the title "Russia Is A Gog". Lindsey revised the traditional translations to bolster this view. He notes that in Ezekiel's passage about "the chief prince of Meshech and Tubal", the Hebrew word for "chief" or "head" is rosh (רֹאשׁ). And rosh sort of sounds like Russia. "Meshech" just maybe might be Moscow. "Tubal" is identified with the Russian city Tobolsk,

which otherwise you probably have never heard of. Therefore, Russia must be the land of Gog.[2]

Ronald Reagan was a believer. In 1971, while governor of California, he told state legislators that:[3]

Ezekiel tells us that Gog, the nation that will lead all of the other powers of darkness against Israel, will come out of the north. Biblical scholars have been saying for generations that Gog must be Russia. What other powerful nation is to the north of Israel? None. But it didn’t seem to make sense before the Russian revolution, when Russia was a Christian country. Now it does, now that Russia has become Communistic and atheistic, now that Russia has set itself against God. Now it fits the description of Gog perfectly.

Since the collapse of the Soviet Union, more recent end times prophets have sought to cast Iraq or some other country in the role of Gog.[note 1] And Russia may yet win back the title and get to be Gog again.[note 2] If not, it won't be for lack of trying.

Lindsey and other dispensationalists typically place Gog and Magog as combatants in the battle of Armageddon. This actually mucks up the dispensationalist timetables. In the Book of Revelation's account, the war of Gog and Magog takes place at the end of the thousand years of the Millennial kingdom. This places their attack after the Second Coming and the establishment of Jesus' personal rule on Earth.

George W. Bush claimed that one of his military goals in Iraq was to thwart Gog and Magog. This confused the French, among others.[4]

Gog and Magog in Britain[edit]

Gog and Magog, giant defenders of the city of London.

Others have claimed descent from Magog; in Johannes Magnus's Historia de omnibus gothorum sueonumque regibus (1554), Magog is the first king of the Goats Geats

The Lord Mayor's account of Gog and Magog says that the Roman Emperor Diocletian had thirty-three wicked daughters. He found thirty-three husbands for them to curb their wicked ways; they chafed at this, and under the leadership of the eldest sister, Alba, they murdered them. For this crime, they were set adrift at sea; they were washed ashore on a windswept island, which after Alba was called Albion. Here they coupled with demons, and gave birth to a race of giants, among whose descendants were Gog and Magog.[5]

According to Geoffrey of Monmouth, Gogmagog was a giant who was slain by the eponymous Cornish hero Corin or Corineus. The tale figures in the body of unlikely lore that has Britain settled by "Brutus" and other fleeing heroes from the Trojan War. Corineus is supposed to have slain the giant by throwing him into the sea near Plymouth, 'cause giants can't swim, you know...or stand up in the surf. John Milton's History of Britain gives this version of the story:

The Island, not yet Britain, but Albion, was in a manner desert and inhospitable, kept only by a remnant of Giants, whose excessive Force and Tyrannie had consumed the rest. Them Brutus destroies, and to his people divides the land, which, with some reference to his own name, he thenceforth calls Britain. To Corineus, Cornwall, as now we call it, fell by lot; the rather by him lik't, for that the hugest Giants in Rocks and Caves were said to lurk still there; which kind of Monsters to deal with was his old exercise.

And heer, with leave bespok'n to recite a grand fable, though dignify'd by our best Poets: While Brutus, on a certain Festival day, solemnly kept on that shore where he first landed (Totnes), was with the People in great jollity and mirth, a crew of these savages, breaking in upon them, began on the sudden another sort of Game than at such a meeting was expected. But at length by many hands overcome, Gogmagog, the hugest, in hight twelve cubits, is reserved alive; that with him Corineus, who desired nothing more, might try his strength, whom in a Wrestle the Giant catching aloft, with a terrible hugg broke three of his Ribs: Nevertheless Corineus, enraged, heaving him up by main force, and on his shoulders bearing him to the next high rock, threw him hedlong all shatter'd into the sea, and left his name on the cliff, called ever since Langoemagog, which is to say, the Giant's Leap.

There is a minor problem with the chronology of these several tales. If Britain was settled by giants during the Roman Empire, it is hard to imagine the giants being there shortly after the Trojan War.

Amongst the ragged Cleeves those monstrous giants sought
Who (of their dreadful kind) t'appal the Trojans brought
Great Gogmagog, an oake that by the roots could teare
So mighty were (that time) the men who lived there
But, for the use of armes he did not understand
(Except some rock or tree, that coming next to land
He raised out of the earth to execute his rage)
He challenge makes for strength, and offereth there his gage
Which Corin taketh up, to answer by and by
Upon this sonne of earth his utmost power to try.

The Gog Magog Hills are about three miles south of Cambridge, said to be the metamorphosis of the giant after being rejected by the nymph Granta (i.e. the River Cam).