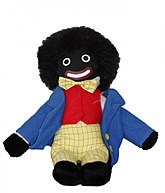 A golliwog or golly (originally Golliwogg) is a racist children's character and toy that was once popular in the UK.[1] A caricature of a black person created by Florence Kate Upton

in the 1890s, it was formerly considered unobjectionable and used as a mascot by the fruit preserve company Robertson's and included in children's books by Enid Blyton and other writers. It was well-known in the UK and parts of Europe, but never popular in the US, which has its own tradition of racist caricature.[2]

More recently, it has been widely condemned as racist, although some people still claim there's nothing wrong with it and use criticism of golliwogs as an example of 'political correctness gone mad' (or possibly as a dog whistle for racist and anti-immigrant sentiment). You can still buy golliwog toys in some of the more backward parts of the UK.

Florence Kate Upton and her mother Bertha created 13 illustrated children's books, beginning with The Adventures of Two Dutch Dolls and a Golliwogg in 1895. The character grew out of the caricatures of minstrelsy and was reportedly based on an American minstrel doll Upton saw as a child.[2] The minstrel tradition depicted exaggerated black characters of stereotyped appearance; golliwogs have prominent white teeth, black skin (literally black, as opposed to the wide range of skin colour in people deemed ethnically black) and large red lips, wearing a bow tie, white shirt, and blue jacket with tails.

The character was not trademarked or otherwise protected, and became popular as a toy and in other authors' books, most prominently in the children's stories of Enid Blyton, one of the most famous and popular British children's writers ever. In one Noddy book, the golliwog steals the title-character's car; her book Three Little Golliwogs described the adventures of characters called Golly, Woggie, and Nigger, and their favourite song was "Ten Little Nigger Boys".[2]

Several companies produced golliwog toys, most prominently the German firm Steiff from 1908.[2] James Robertson & Son, a popular manufacturer of jam and marmalade (fruit preserves) used it as a mascot since 1910, selling brooches (pin badges) and other memorabilia as well as preserved fruit products. The golliwog or golly did not have a consistent character: it could be villainous or gentlemanly; the only constant was its caricatured appearance.

Ironically, the first opposition seems to have come from those proponent of racial harmony and respect, the German Nazi party, who seem to have banned the golliwog in Germany in 1934.[1] Whether this is because they considered it inappropriate for children to be hugging a black person, or some other reason, is unclear.

From the 1980s, as people became more concerned with the idea of not stereotyping blacks or treating them as second-class citizens or comic buffoons, golliwogs became less socially acceptable in the UK.

They were removed from Robertson's jam and retired as a mascot around 2001, with the company blaming the decreasing familiarity of children with the character and denying it had anything to do with being nice to black people, or political correctness, or anything related to not being an asshole.[1] The brand was in decline by then, part of Premier Foods who also made Hartley's jam and Golden Shred marmalade, and Robertson's jam was discontinued in 2008; Premier was sold to the improbably-named American company Hain Celestial in 2011.

The word is associated with the racist epithet "wog" which was popularised in World War Two as British army slang for a dark-skinned Arab. As a result, there has been a tendency to use the euphemistic name "golly", although even that is considered offensive.[2]

Art historian Kenneth Clark (father of fun-loving racist Tory MP Alan Clark[3]) in the 1980s called golliwogs "examples of chivalry, far more persuasive than the unconvincing Knights of the Arthurian legend."[1] As mentioned, this is at best a partially-accurate description of the character.

Carol Thatcher, daughter of Margaret Thatcher, caused a minor controversy in 2009 by comparing the mixed-race French tennis player Jo-Wilfried Tsonga to a golliwog in an off-screen conversation at the BBC. As a result, she was sacked by the BBC.[4] Some people complained that she had been dismissed for remarks made in private and not intended for broadcast, but most people pointed out that using racist language in your workplace is generally frowned upon even in less politically correct workplaces.

Derek Laud, black Jamaican-born supporter of the British Conservative Party and advocate of the British Empire, reportedly collects them.[6] Laud says that he lets close friends call him by the nickname "Golly", but admitted to receiving racist abuse including "Uncle Tom" and said "I don't particularly celebrate the fact of being called Golly."[7]

Politician Bill Etheridge and his wife Star got in trouble in 2011, when both were Conservative council candidates, for their fondness for golliwogs. Etheridge wrote a book called Britain: A Post-Political Correctness Society attacking political correctness with two golliwog toys on the front cover and became a Ukip MEP in 2014.[8] His book currently has 2 one-star and one 5-star review on Amazon UK, with one commenter calling it "another mad ukip rant from the politically insane and intellectually challenged".[9] Dispelling suggestions that he was merely a fan of British children's literature, in 2014 Etheridge called Adolf Hitler a "magnetic and forceful" performer who "achieved a great deal", telling aspiring politicians "I'm not saying direct copy — pick up little moments."[10] 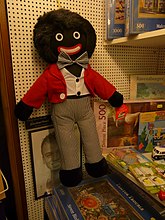 Robert Goodwill, Conservative MP for the seaside result of Scarborough where gollies were still widely available at the time, defended them in 2012 saying, "I can certainly remember as a child we had dolls of this type at home and it never crossed our minds that it was in any way derogatory to black people in the same way that similar rag dolls with white faces were not deemed to be offensive to any indigenous white people in our country."[5] The difference being that white rag dolls are not intended as extreme caricatures of white people and don't act as stereotypes.

In 2016 the Bournemouth Echo reported that a shop selling golliwogs had been disqualified from a competition for best window display, on account of having a racist caricature in its window. Shopkeeper Viv Endicott was pictured holding a sign saying "English Freedom" with a big golliwog in the middle, and a correspondent to the newspaper called the ban "another prime example of political correctness gone mad".[11]