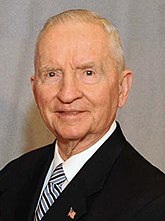 "What's that, sonny? You people again!?"

Henry Ross Perot (1930–2019) had big ears, a crazy Texas drawl, and twice ran for President of the United States as an independent, in 1992 and 1996. He carried 18.9% of the vote in 1992[1] and did better than any 3rd party candidate since Theodore Roosevelt, but his crazy antics (dropping out and dropping back in, his penchant for charts, buying infomercials to sell himself, patronizingly addressing the NAACP as "you people", and something about his daughter's wedding) made him more of a punch line in the end. He did not win any states or electoral votes (best showing: 30% in Maine, where he came in second).

Early in the campaign, Perot was extremely popular with dissatisfied white voters, and he polled 10-15 points ahead of both Bush and Clinton until his statements and dropping out turned off most voters.[4] In the 2016 election cycle, some have noted that Donald Trump is targeting the same voters that Perot did, though despite the aforementioned gaffe while speaking with the NAACP, Perot was never the raging racist asshole Trump is (also Perot was actually personally embarrassed by said gaffe and apologized profusely for it, whereas by comparison Trump unapologetically re-tweets Neo-Nazis and says horrible shit every other day). For modern day comparisons, if Bernie Sanders is a left-populist and Donald Trump is a right-wing populist, Ross Perot could be considered a centrist populist, with all of them attempting to appeal to working class voters in various ways.

After polling above 15% in October, Perot was allowed access to the first, and so far only, series of three-way Presidential debates. His good performance there probably helped shore up the turnout he received on election day. Perot's running mate, James Stockdale, did noticeably worse during the Vice-Presidential debates.

Many claim that he acted as a spoiler, costing Bush the 1992 election. Exit polls from the election show that his support came evenly from potential Clinton and Bush supporters, with a significant amount of his support abstaining from a hypothetical two-way election.[5] Furthermore, the portion of the race during which Perot was absent, from July until the start of October 1992, had Clinton ahead of Bush in all major national polls[6] and in the electoral college tally. In those Perot-less polls, Bush often polled close to the 37% he ultimately won. Bush's approvals in 1992 were consistently in the low 40s and upper 30s, a range similar to Jimmy Carter's in 1980.[7] Perot's political views on hot-button social issues such as LGBT rights, abortion, and free trade were characterized by the left-of-center bent.[8]

Perot became a billionaire through the businesses he founded, Electronic Data Systems (later sold to General Motors, who then sold it to Hewlett-Packard) and Perot Systems (later sold to Dell). In 1979 he sponsored the rescue of two of his EDS employees imprisoned in Iran after the Iranian Revolution. This rescue was the subject of a book and 1986 TV miniseries, On Wings of Eagles, in which Perot was played by Richard Crenna. He also went on to political activism during the 1980s supporting "no pass, no play" in his home state of Texas (school athletes must have passing grades to play team sports), and entering into back-channel negotiations with the Vietnamese government and publicly disputing with the first Bush administration on Perot's belief that Vietnam was still holding U.S. prisoners of war. Thus by the time he ran for President in 1992 he was already well known.

Perot was a critic of the first Gulf War, opposed NAFTA, supported term limits, and, especially, centered his campaign around balancing the federal budget and paying down the national debt. These issues endeared him to a significant segment of the electorate who felt their views were being marginalized by both major party nominees.

Beginning of the Reform Party[edit]

He went on to found United We Stand America in 1993, which became the genesis of the Reform Party, officially launched in 1995. He ran for President again in 1996 and did less well, still carrying about 9% of the nationwide vote. The brief subsequent successes of the Reform Party, most notably Jesse Ventura's election in 1998 as governor of Minnesota and the attraction of high-profile candidates like Colorado's former Democratic governor Richard Lamm, only led to disputes with Perot. This led many to conclude Perot was more interested in the party only being a vehicle for his presidential ambitions, rather than building a new major party. By 2000 it seems he had enough of the infighting within the Reform Party and the impending nomination of Patrick Buchanan as their 2000 nominee; he left the party and endorsed George W. Bush. Not much has been heard from him since.

In 1993, during the height of his popularity, the makers of the PBS show Sesame Street modeled a Muppet after him; H. Ross Parrot.[9]

He was impersonated by Katrina Johnson on the Nickelodeon sketch comedy series “All That”. [10]