From RationalWiki
(Redirected from Helter Skelter)
Jump to: navigation, search 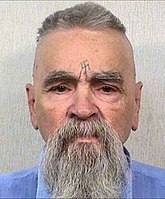 Charles Manson (1934–2017) was a delusional cult leader in the 1960s, with strong messianic tendencies. He believed that the song "Helter Skelter", by the Beatles, along with some of their other songs on the White Album, were a coded order to start a racial uprising in the United States. As a result of this insanity, he led his cult, known as the "Family", on a murder spree which would take the lives of 9 people. The cult's best known victim was the wife of movie director Roman Polanski, Sharon Tate, who at the time of the murders was 8 1/2 months pregnant. Other victims included Family associate and music teacher Gary Hinman, hair stylist Jay Sebring, Polanski's friend and associate Wojciech Frykowski, coffee heiress Abigail Folger who was also Frykowski's girlfriend, student Steven Parent, Family member Donald Shea, and grocery company executive Leno LaBianca and his wife Rosemary. His initial death sentence was commuted to life in prison when California briefly outlawed capital punishment. He remained in prison for these crimes until his death in 2017, periodically coming up before a parole board, which quite sensibly left him where he was. Another of his Family members, Lynette "Squeaky" Fromme, is known for her failed attempt to assassinate US President Gerald Ford.

Helter Skelter is also the title of prosecutor Vincent Bugliosi

's book chronicling his pursuit of the monstrous crimes committed by Manson and his Family.

Prior to his founding the "Family", Manson was an aspiring musician and composer. A number of his musical recordings are circulating across the internet and among collectors of music and "Mansonia". Early work consists of demos he made before the Tate-LaBianca murders, others were recorded in prison on cassette tapes smuggled in and out of his cell. While he did have some talent for bottle neck blues guitar, his composed lyrics were often incoherent.

In a bizarre example of crank magnetism, Manson also has a small cult following among some U.S. neo-Nazis, particularly those of the third positionist ilk, who celebrate his goal of starting a race war that he theorized would end with whites ruling over blacks. Iron March was a major hub for such types, as were the militant neo-Nazi groups that emerged from there. They often fail to think about how he would have likely been euthanized by the Nazis for being "mentally defective".

This crime-related article is a stub.
You can help RationalWiki by expanding it.
Retrieved from "https://rationalwiki.org/w/index.php?title=Charles_Manson&oldid=2362920"
Categories:
Hidden categories: